Kareena Kapoor had an interesting reaction when Saif Ali Khan forgot to add her name to the list of greatest actresses.

"you think of so many important ladies, my favourite actresses"

Kareena Kapoor had an interesting reaction when Saif Ali Khan was asked to name his favourite actresses.

The duo was seen joining the Women in Cinema event at the Film Festival.

Before entering the venue, Saif was asked about the contributions of women in cinema.

While speaking about the matter, Saif named a few actresses but he forgot to mention his wife’s name, prompting a reaction from Kareena.

He said: “Cinema is empty without women for a start.

“When you think of cinema you think of so many important ladies, my favourite actresses from all the way back from Marlene Dietrich to Audrey Hepburn to Charlize Theron.”

Kareena Kapoor was quick to interrupt, saying “to your wife!”

Saif then added: “And to my beautiful wife.”

Kareena laughed at her husband’s addition.

Saif went on to say: “My mum (Sharmila Tagore), her first movie (Apur Sansar) was with Satyajit Ray when she was 16.

“So I think feminine sensitivity and aggression, that whole aspect of nature is what women in cinema mean to me.”

“So many different women from across the world are coming to be a part of this festival to celebrate the fact that women are leading the pack whether it is in India or anywhere.

“All actors are taking up such brave roles so I’m happy there is a special day today.”

One of the most loved couples in Bollywood, the duo shares social media posts now and then which go viral.

For the Red Sea Film Festival, the power couple exuded royalty as they graced the festival in stylish outfits.

Kareena Kapoor shared a picture with her husband and captioned it:

“Never feeling blue with my man… always wearing it.” 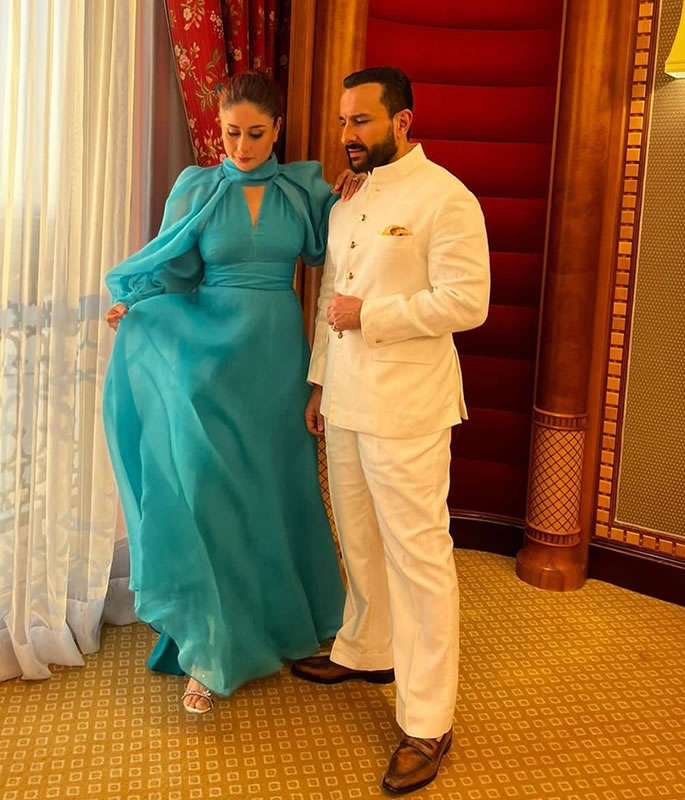 Kareena was stunning as ever in a blue outfit from the shelves of Monique Lhuillier, while Saif opted for a classic white suit.

For her second look, Kareena wore a sequined Sabyasachi saree and Saif was dressed in a white tuxedo.

On the work front, Saif will be seen in Adipurush with Prabhas and Kriti Sanon. The film is expected to be released in 2023.

Meanwhile, Kareena Kapoor will be seen in The Crew with Tabu and Kriti Sanon.

Aarthi is an International Development student and journalist. She likes to write, read books, watch movies, travel, and click pictures. Her motto is, “Be the change you wish to see in the world
Hansika Motwani enjoys Pre-Wedding Festivities
Guneet Monga writes about Marrying at 39 & ‘Beta shaadi nahi ki’