Hansika Motwani is set to tie the knot with Sohael Khaturiya and she enjoyed several of the pre-wedding festivities.

the couple were caught lovingly staring at each other

Hansika Motwani enjoyed her pre-wedding festivities as she prepares to get married.

She and her businessman fiance Sohael Khaturiya are all set to tie the knot on December 4, 2022, at the 450-year-old Mundotta Fort in Jaipur.

Glimpses of the pre-wedding festivities have been shared on social media.

Ahead of their wedding, several pictures from the mehendi and sangeet ceremonies are going viral.

In the Haldi ceremony, Hansika and her fiance Sohael twinned in white floral outfits.

Hansika accessorised her look with statement jewellery, while Sohael was seen in sunglasses. 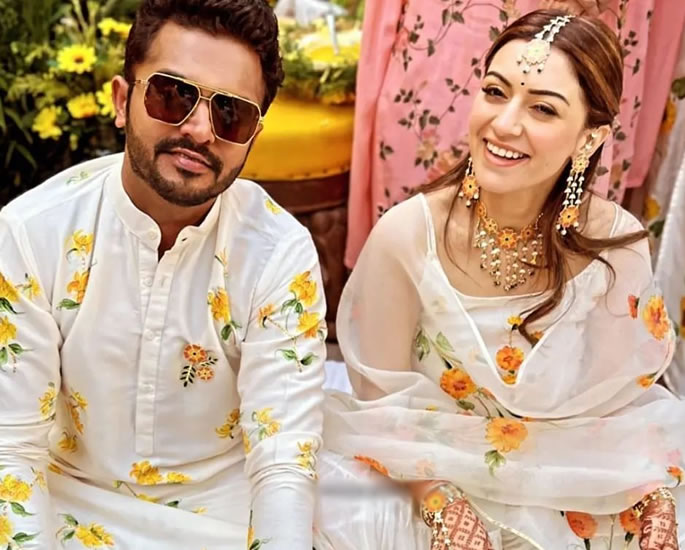 The actress later ditched her heels for trainers as she enjoyed a dance with her husband-to-be.

A video that surfaced on social media shows Hansika and Sohael arriving in an open car for the event when the former was wearing her heels.

Meanwhile, for her Sangeet ceremony, Hansika was seen in a traditional pink ensemble with emerald accessories, and Sohael looked dapper in a black sherwani.

In a picture from the ceremony, the couple were caught lovingly staring at each other as they prepare to get married. 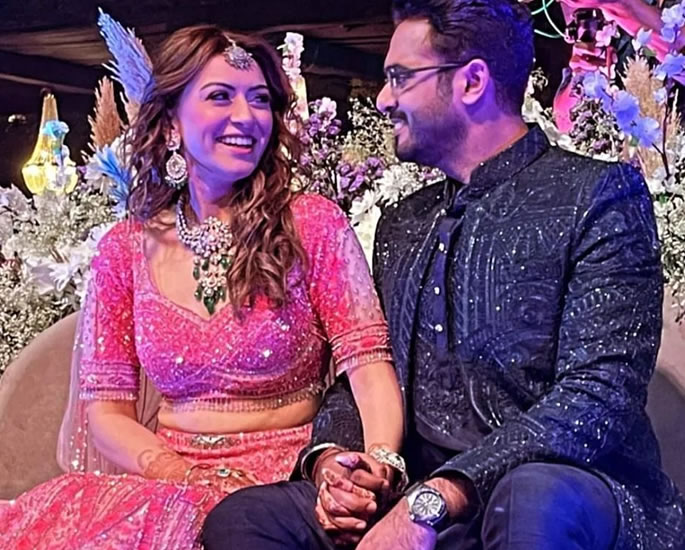 Hansika Motwani and Sohael Khaturiya’s wedding celebrations were kickstarted with the Mata Ki Chowki in Mumbai.

Their other wedding festivities included the bride-to-be’s bachelorette trip with her girls, a Sufi night, and the mehendi ceremony.

In November 2022, Hansika celebrated her bachelorette party in Greece with her friends.

She shared a video on her Instagram handle and captioned it:

“Best bachelorette ever #blessed with the #best.”

The duo will have an intimate yet lavish wedding in the presence of their family members and close friends.

In November 2022, businessman Sohael proposed to Hansika in front of the Eiffel Tower, and Hansika shared pictures of the same on her Instagram handle.

She captioned the pictures: “Now and Forever.”

Meanwhile, on the work front, Hansika Motwani will be next seen in a number of films including Partner, 105 Minutes, My Name Is Shruthi and Rowdy Baby.

She also has two web series, Nasha and MY3, in her pipeline.

Aarthi is an International Development student and journalist. She likes to write, read books, watch movies, travel, and click pictures. Her motto is, “Be the change you wish to see in the world
Mahira Khan trolled for Sharing Favourite ‘Raees’ Scene with SRK
Kareena reacts when Saif names his Favourite Actresses