The release Kabali starring superstar Rajinikanth sent South India into a frenzy with fans going to extreme lengths to celebrate the release of the film.

many employers in Chennai and Bangalore gave the day-off

Kabali Rajinikanth’s film hit the screens on Friday 22 July 2016 and within 24 hours #Kabali trended on Twitter in 53 cities and across nine countries.

The craze for Kabali took India by storm with the film starring Rajinikanth, who at the age of 65, has returned to the big screen after six years.

The film has all the hallmarks of a Rajinikanth blockbuster, featuring special effects, body doubles, action, smoking guns, bloody fight sequences and regional pride and romance.

With a worry that people would miss work and watch the film, many employers in Chennai and Bangalore gave the day-off to go watch the film. Fans everywhere of Rajinikanth paid homage in their own way and flocked into the cinemas to watch their ‘superhero’ in action.

Being shown on more than 12,000 screens in India alone shows the sheer scale of the movie.

The craze from fans for the Kabali, especially, in South India, included cars, ‘autos’ and sports cars all displaying Kabali imagery; a special flight laid on by Air Asia to fly 180 fans from Bangalore to Chennai, featuring Rajinikanth’s favourite food; a man who forgot he was getting married on the release date of Kabali and superfan Srinivasan Jayaseelan from Chennai, who will be watching the film ten times in a row. 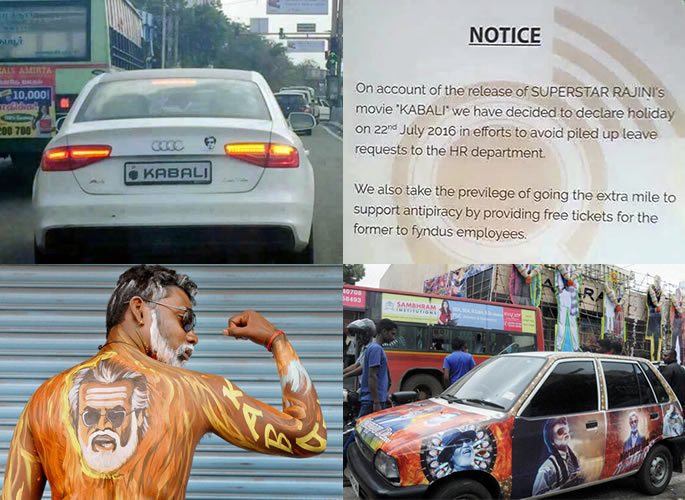 Radhika Apte plays Rajinikanth’s wife in the film. Apte, of Phobia and other films like Parched, Badlapur and Dhoni fame, spoke of working with the massive star Rajinikanth. She says:

“He was warm and friendly from the first day I met him. He treated me with such equality that I never felt nervous. I always felt like a professional actor.”

Enjoy all 3 today,eat MooLi Paratha and watch Kabali and then KohLi in d evening

The story is about Kabali (played by Rajinikanth), a rubber plantation worker, who leaves of prison in Malaysia after a 25-years. He then hunts down the group of gangsters that framed him and landed him in prison.

Kabali fights with the gangsters who run drug and prostitution rackets in the country.

The movie made $30m (£20m) in film rights sales before it was on general release in cinemas. So, the figures for the weekend of release are sure to be totally huge, showing that Rajinikanth still dominates when it comes to blockbusters.

Amit enjoys creative challenges and uses writing as a tool for revelation. He has major interest in news, current affairs, trends and cinema. He likes the quote: "Nothing in fine print is ever good news."
London Indian Film Festival 2016 Closing Night
LIFF 2016 Review ~ JALALER GOLPO