Police have said that a woman from Kerala allegedly murdered six members of her family by lacing their food with cyanide.

"I used to consider Jolly as my elder sister"

A Kerala woman has been arrested for gradually killing six members of her family by lacing their food with cyanide. The suspect was identified as 47-year-old Jolly Thomas.

According to police, Jolly has admitted to poisoning the six members of her family over a 17-year period. These were “well-planned murders” but the truth about these killings has now clearly surfaced.

Her close friend MS Mathew and jewellery shop worker Prajikumar have also been arrested for supplying the poison.

The arrests come 17 years after the first death in 2002. It has shocked the village of Koodathai, Kozhikode.

The alleged murders are of her first husband and five other members of her family.

In 2016, another woman and her one-year-old child also died in strange circumstances who were later found to be the family of Jolly’s second husband.

Initially, there had been no suspicion about the deaths according to Roy’s sister Renji.

However, the case was investigated following a complaint from US-based relative Roji.

It was found that the victims had died shortly after eating and Jolly had been present during each of them.

Police believe that her second marriage and greed for the property to be the motive behind the serial “murders”.

The investigation reopened in August 2019 and the bodies of the victims were exhumed which led to the arrests. Police are awaiting the forensic reports.

Police discovered that Jolly got married for a second time to a man named Shaju Scaria, whose wife and child had died in a similar fashion.

Jolly had claimed to be a lecturer at the National Institute of Technology in Kerala. She used to leave the house saying she was going there, however, officers found she had created a fake identity card.

Renji explained: “I used to consider Jolly as my elder sister, I used to like her. She used to behave in a friendly manner with everyone”

She went on to say that her father called Jolly a model daughter-in-law.

Jolly had married Roy in 1997 but Renji explained that after her mother died, she began taking control of the family.

Renji said her brother died heartbroken as his marriage with Jolly had declined.

After his death, an autopsy found cyanide in Roy’s body but police had called it a case of suicide.

Mathew died three years later after he demanded another autopsy to be conducted.

Following the suspect’s second marriage, Renji and her brother Roji suspected that Jolly made have been involved in her family’s deaths after finding forged property documents. 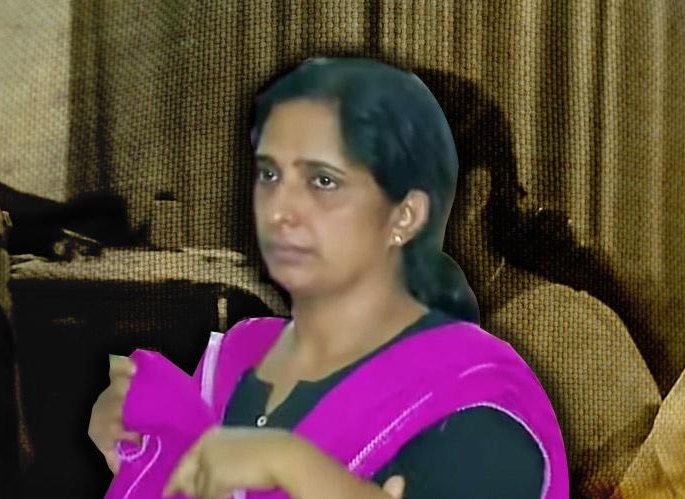 Renji explained that she and her brother had visited the house numerous times since 2016. They have said that they have not consumed anything there out of fear they would be poisoned.

“Last week I had gone to the house. I was given a glass of juice and I refused to take it.”

During questioning, Jolly also revealed that she had a hatred towards girls and that she had tried to kill the daughter of Renji Thomas. She had, in fact, had two abortions herself which police say could have been female children.

Jolly’s second husband, Shaju, has been questioned and released. He told media she is trying to include him in the crimes that she is said to have committed, saying:

“At the moment, she is alone and wants to trap me also, when I have no role in this.

“I never used to like the way she conducts herself, but in order to keep the family moving forward, I never contested her decisions.

“She used to say she was a lecturer in NIT Kozhikode and she would go every day. I never ever intervened in any of her dealings and have no clue on what she was doing.”

Officers explained that while the suspects have been arrested, it was only for the 2016 deaths.

They said that they were waiting for forensic evidence in relation to the previous deaths.

Jolly’s second husband and two others had been arrested but were released without charge.

Kozhikode Superintendent KG Simon said: “Once we get forensic details we will file a detailed charge sheet.”

Hindustan Times reported that he went on to say that it was likely that more suspects would be arrested.

Dhiren is a journalism graduate with a passion for gaming, watching films and sports. He also enjoys cooking from time to time. His motto is to “Live life one day at a time.”
Man groomed Girls on Social Media & Sexually Abused Them
Husband says Indian Wife stabbed in Sydney was Not Plotted