Karanvir Bohra trolled for getting ‘Handsy’ with Poonam Pandey

Karanvir Bohra is facing criticism after he was seen with Poonam Pandey and putting on a touch-feely display with her.

Karanvir Bohra has come under fire after he was seen getting handsy with Poonam Pandey.

The pair were on Lock Upp together and have remained friends.

In a video, they were seen having a fun time together on the streets of Mumbai, however, Karanvir was criticised for his behaviour, especially because he is married with children.

Poonam was dressed in a black jumper and leather trousers while Karanvir sported a blue t-shirt and jeans.

The pair posed for the paparazzi before Karanvir was seen lifting her up, prompting a laugh from Poonam.

He declares: “Poonam Pandey, as light as a feather.”

Karanvir then briefly spins her around before putting her down.

His close behaviour with Poonam led to backlash as many reminded Karanvir that he is married.

One person said: “This guy is obscene.”

Another said: “Brother, you are married and have three kids, take some care.”

Others trolled Karanvir, saying that his close behaviour with Poonam is putting him at risk of divorce.

While lifting Poonam caused controversy, Karanvir continued to be ‘hands-on’ which appeared to even make Poonam uncomfortable.

After putting the glamour model down, the pair posed for photos.

Karanvir tried to turn Poonam’s face towards him, suggesting that they recreate their look from the poster of their upcoming music video.

Refusing to let him touch her face, Poonam laughs and takes a step back.

Karanvir continues to attempt to touch Poonam’s face but she does not let him, telling him it is better for people to just look at their poster.

Continuing to pose for pictures, Karanvir has his arm around Poonam, however, his hand appears to touch Poonam’s sideboob. She then moves away from him. 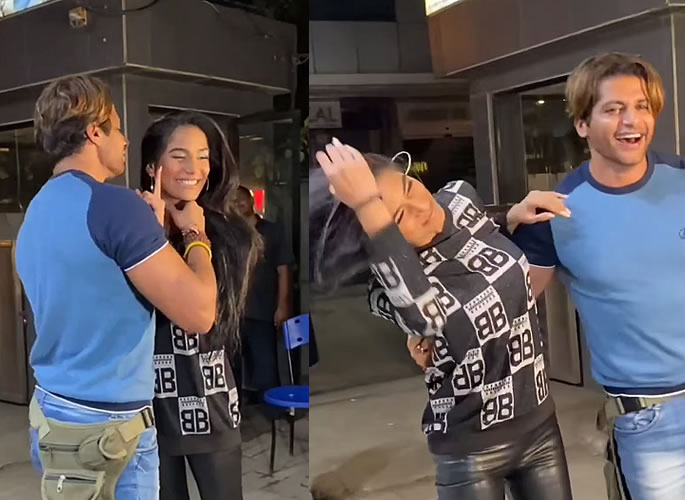 Poonam is then brushing past Karanvir to talk to someone. The latter then bizarrely shouts:

He then points at himself.

Social media users slammed Karanvir for his handsy behaviour, stating that it was making Poonam uncomfortable.

“Is it only me who felt that she got so uncomfortable with him, she was being good in front of the camera!”

Another wrote: “Clearly looking like she’s so uncomfortable with him.”

A third said: “What’s wrong with this man he has a wife and kids!!! Even Poonam Pandey is feeling uncomfortable.”

One user said: “What a creep this guy is.”

Dhiren is a journalism graduate with a passion for gaming, watching films and sports. He also enjoys cooking from time to time. His motto is to “Live life one day at a time.”
Was Aryan Khan a Victim of Police Corruption?
Janhvi Kapoor gives Sister Khushi Dating Advice