Kajol is back in Bollywood with a new drama, ‘Helicopter Eela’, a film about a single mother and son relationship. She talks to DESIblitz about the film, motherhood, SRK and filmmaking.

"Every mother will identify with her, no two ways about it."

The talented and bubbly Kajol returns to Hindi cinema with her upcoming film, Helicopter Eela (2018), produced by husband, Ajay Devgn.

The film tells the story of a single mother, who puts her singing career on hold to give motherhood her all.

It is based on the Anand Gandhi’s Gujarati play Beta Kaagdo. Gandhi also serves a co-screenwriter alongside Mitesh Shah.

Fresh off the release of Fanney Khan, Amit Trivedi serves as the music composer of the film’s soundtrack, giving audiences a sneak peek in the trailer. We expect indie vibes for the mother-son bonding scenes with pop style music for Eela’s music videos. 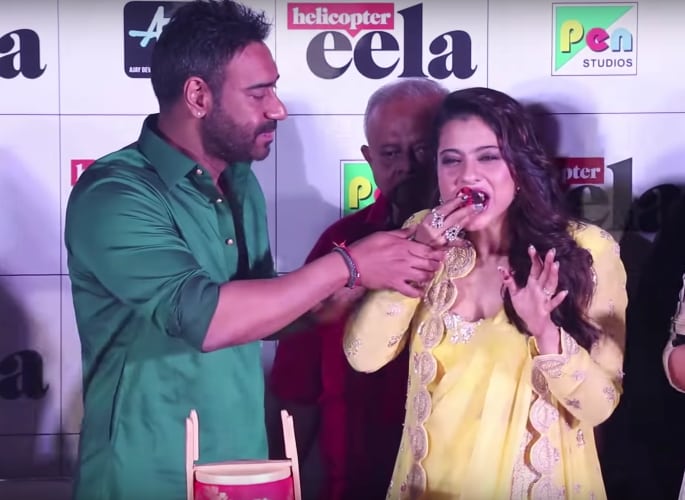 The team celebrated Kajol’s birthday at the trailer launch with cake and the singing of “Happy Birthday”.

The trailer was released on the 5th August, a nice birthday treat for the leading actress!

Watch the Trailer for Helicopter Eela: 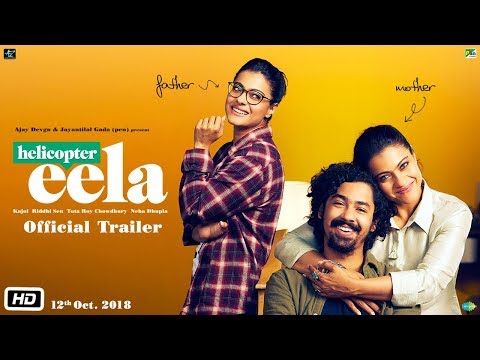 The trailer promises laughter and tears in this whirlwind of a drama about a tumultuous relationship between a mother and son.

Eela (Kajol), a single mother with plans to complete her education after putting her life and singing career on hold to raise her son Vivan (Riddhi Sen). She enrols in her son’s college class. What could go wrong?

Eela uses this idea to spend more time with Vivan and get her life on track. However, it looks like this causes problems between the two as Vivan tries to save himself from humiliation. 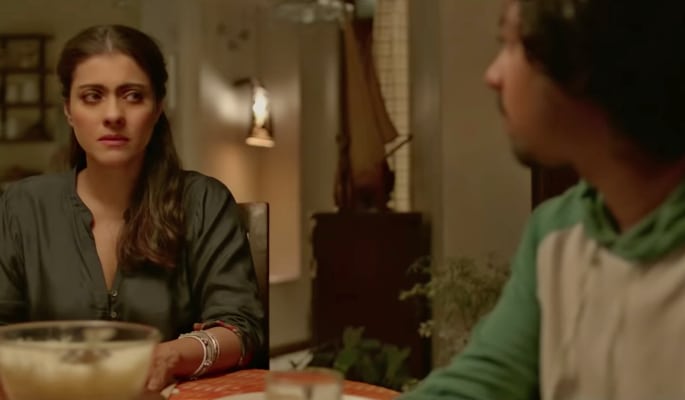 Kajol told DESIblitz how she prepared for the role:

“I had two kids… So, that’s how I prepared for the role actually! Seriously speaking I didn’t have to prepare that much for it because Eela is a very very typical mom. Every mother will identify with her, no two ways about it.”

“The film has very relatable characters, it’s talking about a single mother and it’s talking about how she gets lost in being just a mom per se and how she has to come out of that and find all the little pieces of herself that she’s lost along the way.”

The Dilwale actress’ Bollywood return brings you a unique and modern take on parenting. Definitely not one to miss.

The response to the trailer for Helicopter Eela has been very positive. Audiences are loving Kajol’s elegance in beauty and performance, and her return to Bollywood cinema with such a meaningful film.

Longtime friend and collaborator, Karan Johar had this to say:

“Kajol is stunning and absolutely wonderful as ever!!!! Lights up the screen in every frame of this lovely trailer! Great tone and seems like a fun and emotional watch!”

Kajol is stunning and absolutely wonderful as ever!!!! Lights up the screen in every frame of this lovely trailer! Great tone and seems like a fun and emotional watch! https://t.co/aD3pmDi7dR

Twitter user, @JasmenFakhri was stunned by Kajol’s beauty, she tweeted four images of Kajol from the trailer, captioned:

“My god !! I loved #HelicopterEelaTrailer !! That funny & bubbly Kajol & she looked so beautiful in the trailer !! #HappyBirthdayKajol”

“So its @KajolAtUn ‘s birthday and we get the gift! #HelicopterEelaTrailer is SO ENDEARING! so relatable and kajol proves it that she can act with just her eyes! Added bonus- IRS directed by the wowest pradeep sarkar!”

So its @KajolAtUN ‘s birthday and we get the gift! #HelicopterEelaTrailer is SO ENDEARING! so relatable and kajol proves it that she can act with just her eyes!
Added bonus- IRS directed by the wowest pradeep sarkar!

“#HelicopterEelaTrailer looks amazingg!! I can’t wait to watch the film! Kajol is outstanding as always! You can see that in just those few minutes!”

#HelicopterEelaTrailer looks amazingg!! I can't wait to watch the film! Kajol is outstanding as always! You can see that in just those few minutes! ?? @KajolAtUN

Having spent nearly 3 decades in the industry, Kajol talks about how Bollywood has changed. 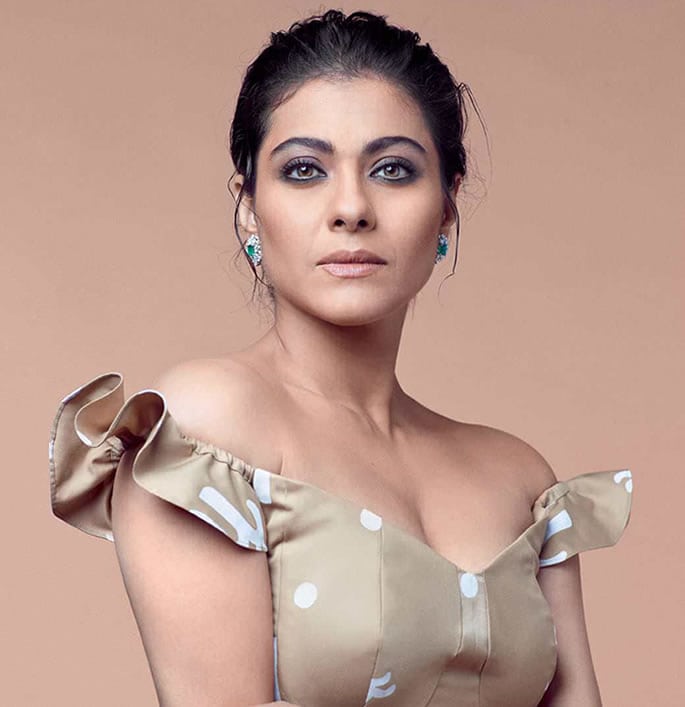 “Filmmaking has changed a lot, no two ways about it… The kind of films that we do have changed, fortunately for the better, because we have a more accepting audience. Our audience has changed to be very honest.”

“They are willing to look at films which are not off the regular mainstream genre.”

“They’re doing enough to make the box office sing which is why it’s such an interesting time to be in Bollywood right now. Different kinds of films are being made. We have finally broken the… making films in three genres that is romance, action and comedy”

“We finally have films that are all different kinds of genres and they don’t have genres. You’ll have stories being told rather than genres of films and that’s why it’s a very, very exciting time right now to be in Bollywood.”

Kajol stands out from the crowd with her amazing facial expressions and her comedic demeanour that often translates to the screen.

We can’t forget the ‘Gamla’ scene from K3G. 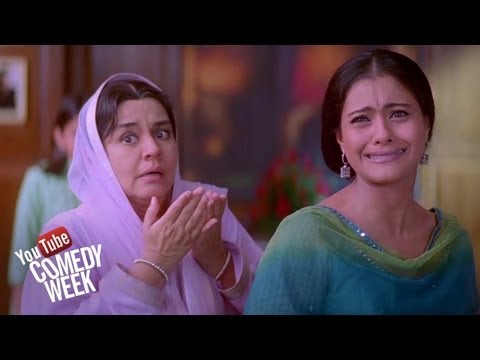 Kajol talks about her famous on-screen chemistry with Shahrukh Khan with whom, she has romanced in 7 films.

“I’ve said it countless times, we’re friends. We’ve known each other for a long time, so there’s a certain ease. There’s a certain comfort. There is certain ease of body language that comes across. Just ease of sitting in somebody’s company that you know very, very well.

“So I think that comes across on screen, plus there is something called cinematic history.”

“So you’ve seen four, five, six films with us which have done phenomenally well. And you automatically attribute that pair with a certain je ne sais quoi.”

The actress has bagged 6 Filmfare awards out of 12 nominations, 5 of which are for Best Actress. A Filmfare record she shares with her aunt, Nutan. In 2011, she was awarded the Padma Shri.

There is no doubt about it. Kajol is one the best actors and an icon in Indian cinema. With her accolades and numerous on-screen romances with the King, Shahrukh Khan, it’s only fitting that we call her the Queen of Bollywood.

Watch the Full Interview with Kajol: 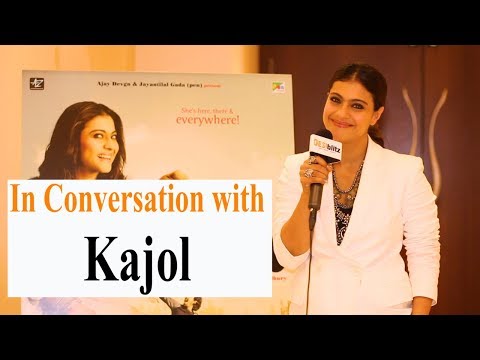 Be on the lookout for Kajol’s cameo appearance in the anticipated Shahrukh Khan film, Zero, which releases December 2018.