"During the pandemic, we all got some time to introspect and choose films"

Actor Ranbir Kapoor has started the new year with a banger of an announcement that has left all Bollywood fans buzzing.

The actor will be seen in a family-drama film titled Animal which will be helmed by Sandeep Reddy Vanga, the director of Kabir Singh.

The movie’s first look was launched on YouTube with a music video showcasing the title of the film and some dialogues that give the audience a glimpse into what it’s about.

The teaser trailer had Ranbir’s voice-over and power-packed background music by Harshavardhan Rameshwar, who has composed music for both of Vanga’s films Arjun Reddy and Kabir Singh.

Parineeti Chopra took to Twitter to show her excitement on the upcoming venture. She wrote:

“It keeps getting bigger and better! 2021 you already have my (heart)”

“Oh boy! The new year just gets better with this whistle! Presenting, #Animal, can’t wait for our journey to begin.”

In the teaser, Ranbir’s character can be heard asking his father to be his son in his next birth so that he can express his love towards him.

However, the actor’s monologue has an ominous ring to it that makes us think the film is going to be dark and mysterious. 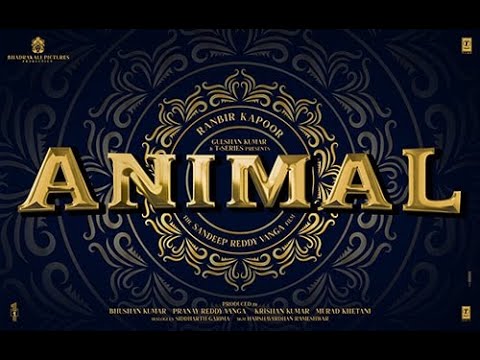 After the new film was announced, the hashtag #RanbirKapoor became the top trend on Twitter.

Commenting on why he chose to do the film, Ranbir told IANS:

“During the pandemic, we all got some time to introspect and choose films that are close to our hearts.

“So when Sandeep narrated the story, I grew close to the character and was immediately keen on doing the role.”

The Sanju actor also expressed his admiration for the film’s creators and said:

“I’m a huge admirer of both of his movies and really looking forward to our creative collaboration.”

“Bhushan Kumar sir is one of the producers who is backing strong content entertaining cinema and his immense knowledge of music will be seen in Animal.

“I am so grateful to work with such a great ensemble cast, I can’t wait to start the shoot for Animal.”

Sandeep Reddy Vanga was also quick to share his views on the film’s cast. He stated:

“I’m very excited to call action and cut on Ranbir Kapoor. The exemplary Anil Sir, Bobby Ji and the sprightly Parineeti will be adding so much to the film.”

The film’s producer Bhushan Kumar too showed his excitement on the ambitious upcoming project by praising Sandeep for his directorial prowess and Ranbir’s acting finesse.

He also thanked Anil Kapoor and Parineeti, with whom he has worked before, for coming on board and completing the “power-packed cast.”

The dialogues of the film are being penned by writers Siddharth-Garima, who were also part of the ‘Kabir Singh’ team.

Gazal is an English Literature and Media and Communications graduate. She loves football, fashion, travelling, films and photography. She believes in confidence and kindness and lives by the motto: "Be fearless in the pursuit of what sets your soul on fire."
Deepika Padukone deletes all Posts from Social Media
Katrina Kaif gets Booed by Salman Khan Fan in Video