Is Amir Khan’s relationship with Faryal in Trouble?

Amir Khan’s relationship with Faryal Makhdoom has had challenges but a cryptic tweet from the boxer hinted that it is in trouble again.

"two can share one umbrella and weather the storm"

Amir Khan shared a cryptic tweet which has implied that his relationship with wife Faryal Makhdoom is going through a rough patch.

The former boxer married the influencer in 2013.

In a now-deleted tweet, Amir shared a picture of him and Faryal smiling for the camera whilst they enjoyed steak at a restaurant.

Talking about working through the tough times in relationships, Amir captioned the post:

“No relationship is all sunshine but two can share one umbrella and weather the storm together.”

The couple’s relationship has been plagued by cheating allegations in the past, including accusations that the ex-boxer cheated on his wife just days after the arrival of their second child. 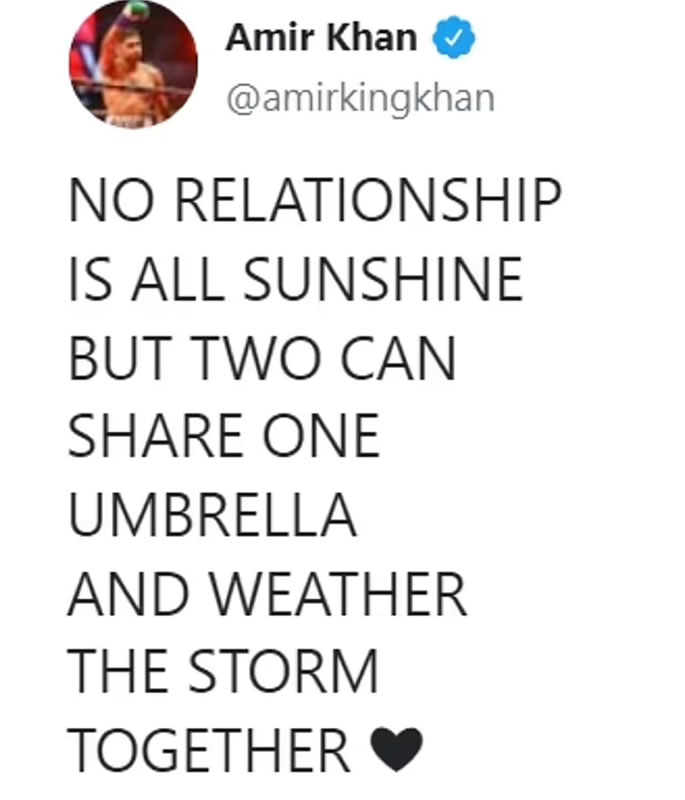 The pair candidly spoke about their marriage during their reality show Meet The Khans: Big In Bolton.

On the show, Faryal admitted that she and Amir have “been to hell and back” since being married in 2013.

Faryal told The Sun: “We’ve moved on. The past is the past, we were young, we grew up together – the bad and the good.

“Amir was so famous and so young when I first started dating him and married him, and now it’s like… he’s an old man!”

Amir added: “It changes with time. When you have three kids, it changes your responsibilities. I’ve had that crazy life before, now I’m a changed man.”

Faryal vowed to make their marriage work when she learned she was pregnant with her second child.

The couple are parents to Lamaisah, Alayna and Muhammad.

Faryal said: “Me being a young girl, I would feel kind of betrayed. My marriage did go into a really bad place where it was like, ‘That’s it, there is no turning back’.

“But I found out I was pregnant with my second child, so she was like such a blessing, my little angel. I thought, ‘For my children’s sake, I’m going to make this work’.”

The couple briefly split up in 2017 after Amir Khan accused his wife of cheating on him with Anthony Joshua.

Amir later said he made the false claims after he was influenced by a lot of fake messages.

He said: “It was a made-up message.

“A lot of people were making all these fake messages saying that ‘Joshua messaged your wife and she messaged him back’.

“Then I posted it on social media and said, ‘This has happened and it’s true. And I’m calling it over. She’s no longer my wife’.”

After thinking things through, he apologised.

“I did feel bad, I did feel stupid at the time but the damage was done. I made that mistake in tweeting something and putting it out. I was just digging a deeper and deeper hole.

“I remember I went to see Faryal. I apologised. I said, ‘Look, I don’t know what went through my head’. And I totally changed my ways, changed the way I am.”

Dhiren is a journalism graduate with a passion for gaming, watching films and sports. He also enjoys cooking from time to time. His motto is to “Live life one day at a time.”
Mia Khalifa criticises ‘Manchild’ Leonardo DiCaprio
Indian Man racially abused by US Man in Poland