India’s first ‘saviour sibling’ has cured her older brother of a fatal illness. However, it has raised a number of ethical questions.

"I found out that there was no cure for his illness"

Kavya Solanki was born in October 2018. In March 2020, when she was 18 months old, her bone marrow was extracted and transplanted into her brother Abhijit.

Abhijit suffered from thalassaemia major, a disorder where his haemoglobin count was extremely low and he required frequent blood transfusions.

“Abhijit was born after my first daughter. We were a happy family. He was 10 months old when we learnt that he was thalassaemic. We were devastated. He was weak, his immune system was compromised and he often became ill.

“And when I found out that there was no cure for his illness, my grief doubled.”

Sahdevsinh began reading about the disease and sought advice from medical experts.

After hearing about bone marrow transplant as being a permanent cure, he began looking into it. However, the family’s bone marrow was not a match.

In 2017, he discovered an article on saviour siblings, a baby created for the purpose of donating organs, cells or bone marrow to an older sibling.

Sahdevsinh approached Dr Manish Banker and persuaded him to prepare a thalassaemia-free foetus for Abhijit’s treatment.

Sahdevsinh said the family opted for a saviour sibling because they ran out of options.

One hospital said they had found a match in the US, however, it would cost around £52,000 and the success rate was 20-30% due to it being an unrelated donor.

Dr Banker revealed it took more than six months to create the embryo, screen it and match it with Abhijit’s. Once it became a match, the foetus was planted in the mother’s womb.

Dr Banker said: “After Kavya’s birth, we had to wait another 16 to 18 months so that her weight could increase to 10-12kg. The bone marrow transplant was done in March.

“Then we waited for a few months to see whether the recipient had accepted the transplant before announcing it.”

Sahdevsinh said: “It’s been seven months since the transplant and Abhijit has not needed another transfusion.”

Dr Deepa Trivedi carried out the transplant and said that after the procedure, Kavya’s haemoglobin levels had decreased and there was localised pain for a few days from where the bone marrow was taken, but she’s now fully healed.

She added: “Both Kavya and Abhijit are now completely healthy.” 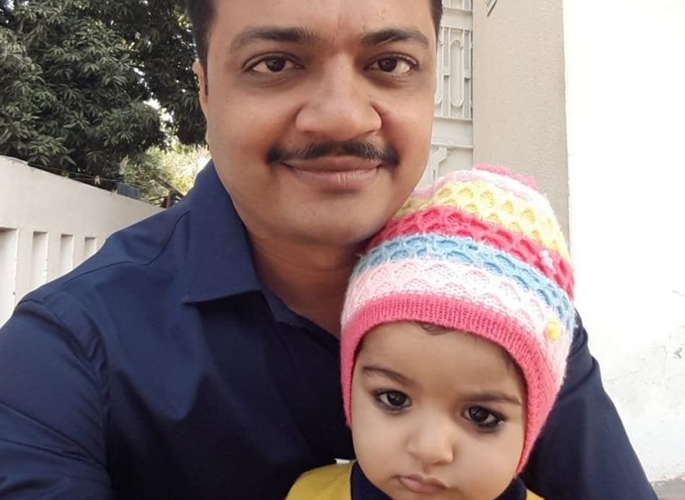 “We love her even more than our other children. She’s not just our child, she’s also our family’s saviour. We’ll be grateful to her forever.”

However, it has raised questions about the ethics of using technology to create a child to save a sibling.

Some experts have said a child is being put at risk without their consent. Others said that it could lead to modifying genes in existing humans.

Sahdevsinh said that it is not right for outsiders to judge his family.

He stated: “We are the ones living this reality. You have to look at people’s intentions behind an act. Put yourself in my situation before you judge me.

“All parents want healthy children and there’s nothing unethical about it to want to improve the health of your child. People have children for all sorts of reasons – to take on the family business or to continue the family name or even to provide company to an only child. Why scrutinise my motives?”

Dr Banker revealed that prior to the treatment, Abhijit’s life expectancy was between 25 and 30 years. Now that he is cured, he has a normal life expectancy.

Dhiren is a journalism graduate with a passion for gaming, watching films and sports. He also enjoys cooking from time to time. His motto is to “Live life one day at a time.”
Billionaire Nirav Modi ‘too depressed’ to Stand Trial
Police to Stop Christmas Gatherings if they Breach Restrictions