A popular Indian takeaway in Bury is celebrating five years of serving up home-cooked authentic Indian food and the empowerment of women.

"these women are being empowered."

Shazia Ansari started the Bury-based business after quitting her sales job at a solicitor’s firm in Manchester.

The business, which also offers a dine-in service, evolved from the dine-for-two service she started while still working in Manchester, realising there was a gap in the market for quality Indian food.

And following a trip to Goa with friends, Shazia was inspired to take her idea further after sampling the foods on street food markets.

She explained: “It is something I always wanted to do, I just wanted to challenge myself.

“I started with dine- for-two, cooking for my neighbours and friends.

“In 2015, I went to Goa with friends and we would go to the nicest hotels but always end up at a place which did street food.

“I said to my friends I am definitely going back and do food, and we took a picture of us there and they said when we get back you are going to do it.”

But Shazia also wanted her idea to be a venture which transformed lives.

Shazia’s Street Food has done for her all-women workforce, many of whom were given the opportunity to work for the first time.

She continued: “I made a conscious decision I just wanted women working with me and they are so talented as homemakers.

“At the same time, these women are being empowered.

“Typically a takeaway such as this is run by men, but from my point of view, these women are stronger and have so much more to bring to the table.

“They have now got financial independence and the confidence to interact with people outside their own community, they have built friendships.

“So many doors are open to them because of this opportunity, it really is exhilarating.

“We have created a great working environment.” 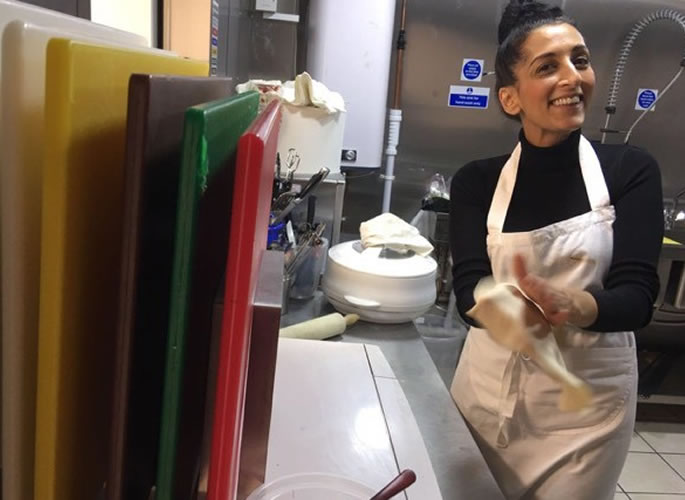 On her business, Shazia said:

“I wanted to create something where people can come and eat and feel like it was home from home.

“We had a coach of people visiting Manchester from London. They had places to visit in Manchester and Shazia’s Street Food was on their list.

“They came for breakfast and had to come back before heading back to London. That was a huge compliment.”

In a five-year period, Shazia feels that her takeaway has built a good reputation. She has now inspired other women to go into the food business.

“It is so hard, you are consumed by your business, it takes patience, focus, you have to manage a team, it’s believing in yourself, not doubting yourself.

“It’s very tough. It’s hard work all the time, we got hit by Covid but thankfully, our customers have continued to support us and for that, we are very grateful.

“We have always got to deliver good food. We will never take shortcuts to make more profit.

“It was never about chasing the money but about financial stability for me and my team.

“It’s fantastic what has been created and I like to think it is different to the average takeaway.”

“Not only do we offer amazing food but it is how we make people feel.

“I make the team feel amazing about themselves and in turn, they will give exceptional customer service. And that is important to me – how we make people feel.”

The takeaway’s opening hours are only during the day, allowing Shazia’s team to have a good work/home balance.

Shazia marked the business’ fifth anniversary by throwing a party for her team.

She told Bury Times: “For me, it was a party for my team, we celebrated the first and second anniversary, missed third and fourth due to Covid, so the fifth had to be a welcome back celebration for my team.

“It was about having a good time and more importantly, to say thank you to our customers, because without them, we couldn’t do what we love to do.”

Dhiren is a journalism graduate with a passion for gaming, watching films and sports. He also enjoys cooking from time to time. His motto is to “Live life one day at a time.”
Curry House hopes to break Christmas Day Meals Record
Indian Man reacts to Chole Bhature in Sweden