A group of influential British Asian women have joined hands to support vulnerable women who are victims of violence in South Asia. The UK organisation has teamed up with Oxfam is a sub-group of Annie Lennox’s The Circle.

"There is tremendous value in the seeds we can plant for the benefit of women in the developing world."

A British Asian charity organisation has launched to offer much needed support to vulnerable women in India and across South Asia.

Set up in the UK, the network includes a number of high profile British Asian women including lawyers, financiers, scientists and business people.

The charity is founded and chaired by Santosh Bhanot, and is actually a sub-organisation of ‘The Circle’ which is part of Oxfam. The Circle was founded in 2008 by the famous singer, Annie Lennox who decided to create an international network of influential women who could bring about change for ordinary women suffering at the hands of violence and oppression everywhere. 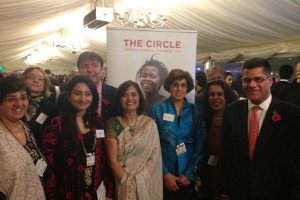 Santosh has a doctorate in Pharmaceutical Sciences and was a Research Fellow at Nottingham University and Kings College London. She decided to create the organisation after visiting women in India.

She underwent a ‘two month mission’ to Kumbh Mela, where she visited a number of charity programmes and NGOs in the area and saw how oppressed women had been living their lives.

The statistics are sadly unsurprising; 35 per cent of women suffer physical and sexual violence. 48 per cent of this takes place within the home. The number of cases in incidences of violence is also rising. In 2004, there were around 156,000 reported cases, while in 2009 there were 205,000.

With this in mind, Santosh decided to team up with Oxfam, and founded the Asian Circle which, alongside Lennox’s The Circle, would do their upmost to support women across South Asia. Santosh believes it is vitally important for influential women to help those who are vulnerable and in dire need of support across the world. 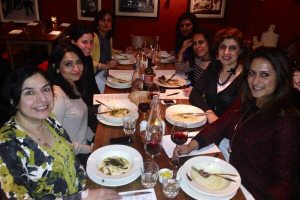 While the organisation was set up in Britain, all its members believe the necessity for Asian women to give back to their homeland in any way they can, and the Asian Circle is a perfect example of professional, hard-working women teaming together to bring about successful change.

One of the NGOs set up by Oxfam India is Humsafar, which offers an outreach programme for women who have suffered domestic violence and physical abuse.

As Santosh explains, the NGO works to ‘provide direct support to women facing domestic violence, through counselling and legal support.’ The NGO also offers education within schools and the community to teach both men and women and boys and girls about gender equality. It has even offered lessons on educating boys to understand domestic violence and know that it is wrong.

But perhaps the most essential aim of Humsafar is ‘advocacy on implementation of domestic violence law.’ Many people get away with committing heinous crimes and remain unpunished, encouraging them to do it again. Humsafar has teamed up with local authorities to ensure that all women are protected under the Domestic Violence Act and that this is suitably enforced.

Using these similar aims of Oxfam’s NGOs in India, Asian Circle hopes to aid women in India who are victims of violence. As Santosh says:

“Violence against women is the most pervasive and least recognised human rights violation. It is one of the most significant mechanisms by which individuals, societies and states retain power over women.”

Discussion of such delicate matters is vital to stop them happening again. Many women in these areas feel that by speaking out, more harm will come to them and so they remain silent on the atrocities that they face on a daily basis. Some women even consider violence acceptable, with an incredible 68 per cent of women believing it is justified, and Santosh believes that this is one behavioural habit that needs to be broken. 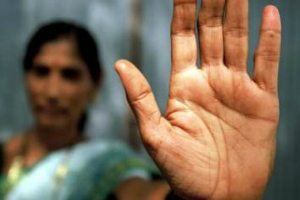 Interestingly, Santosh also adds: “Most women want support, but not to break with their family, so it is necessary to work with the community to ensure that the woman’s situation is improved. In most cases, the goal is to find a way of ensuring that behaviour is modified.”

Thus, finding the right balance between gender equality and family unity is essential for these women. Such a task can be difficult especially as issues around violence are sensitive in the dominant patriarchal society, where 72 per cent of men agree with using violence.

Asian Circle have already begun successful outreach programmes in India and continues to do so with the support of its members and donators. With the organisation quickly becoming such an integral part of Lennox’s The Circle, the singer sent a message to the group saying: 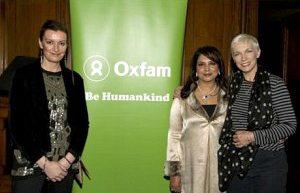 “It’s inspirational to see how you are embracing The Circle credo with such energy, direction and motivation. I truly believe that there is tremendous value and potential in the seeds we can plant for the future benefit of women in the developing world.

“We are trying to establish the best way forward for The Circle, and are very glad to have you on board with us. In my view, we haven’t yet scratched the surface,” Annie adds.

Since its beginning, The Circle has raised £1 million to support vulnerable women and has a network of 400 women across the world.

Taking inspiration from their parent organisation, Santosh hopes that much more can be done to help women across South Asia. By offering much needed guidance, legal support and education many vulnerable women can be saved from the horror of domestic violence and physical abuse for good.

Aisha an English literature graduate, is a keen editorial writer. She adores reading, theatre, and anything arts related. She is a creative soul and is always reinventing herself. Her motto is: “Life is too short, so eat dessert first!”
The Beauty of the Lake District
Asian Neurosurgeon charged with Sexual Assault