Indian Husband cuts off Wife’s Nose due to No Dowry

An Indian husband cut off his wife’s nose after her family gave no dowry after eight years of marriage. Warning this report contains graphic images.

"He’s used belts, slippers, sticks and has always tortured me. "

Sanjeev Rathore, aged 27, is on the run after cutting off his wife’s nose because of demands for a dowry of Rs 50,000 (approx £550) not being met by her family after eight years of marriage.

The couple has a six-year-old daughter and resided in an extended family in Shahjahanpur, in Uttar Pradesh, a northern region of India.

Kamlesh Rathore, aged 25, the scarred wife who now has a mutilated nose due to the attack, said that her husband Sanjeev had been demanding the dowry since their wedding.

Talking about the constant demands and her married life of misery with Sanjeev, Kamlesh said:

“He harassed me every day for the dowry. He was constantly demanding Rs 50,000.

“I repeatedly told him that my father is very poor and he cannot afford such an amount but he did not listen and used to threaten me that he’ll chop off my nose.
“He has beaten me for years.

“He’s used belts, slippers, sticks and has always tortured me.

“He used to accuse me of working as a prostitute and threaten to sell me. He was always drunk. During our eight years of marriage, he was very harsh with me.”

Sanjeev cut off his wife’s nose on September 14, whilst she was cooking dinner after shouting at her and demanding the dowry money from her again. However, he did not act alone in the incident, her in-laws pinned her down after grabbing her from behind while he got a knife and committed the horrible attack on her nose. 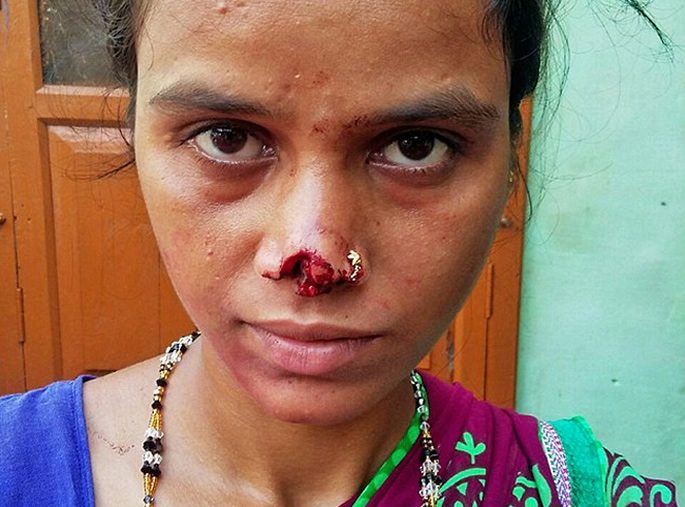 “They all [in-laws] grabbed me tightly. I could not move. And then out of nowhere, I saw a knife and he chopped off my nose.”

After deforming her by the attack, Sanjeev said: “You’ll now be like this forever”.

Immediately after cutting off his wife’s nose, Sanjeev and the in-laws left and fled, taking the cut-off part of her nose with them.

Whilst bleeding heavily, Kamlesh sought immediate help and assistance from her parents nearby and was admitted to the primary health centre, in Shahjahanpur, for attention to her injury.

Doctors treated the wound by bandaging it up but could not do anymore, due to the part of her nose missing.

Coming from a very poor family, getting surgery to help Kamlesh to fix her nose is impossible. Her brother Sachin, aged 26 reacted and said:

“My sister’s husband has been very cruel. He has given her a terrible life and now this.”

A FIR against the husband and in-laws has been registered by Khutar police in Shahjhanpur and the police are in pursuit of them.

Superintendent Manoj Kumar said: “We’re still chasing the husband, mother-in-law, father-in-law, sister and brother-in-law Until we catch them we cannot say any more.”