Indian Bride performs Chenda at Her Own Wedding

An Indian bride went viral for playing the chenda at her own wedding. The celebrations happened in Kerala.

She performs for her guests with enthusiasm.

A Kerala-based bride enthralled social media users by playing the chenda with Shinkari Melam artists at her own wedding.

A chenda is a traditional drum-like instrument from Kerala that is usually played on special occasions such as weddings.

In this case, a bride played the instrument, which is a rarity.

It was reported that her father and the groom joined in with the performance, playing the chenda and cymbal.

In a viral video, the bride is seen dressed in a red saree and playing the chenda, surrounded by other chenda players. 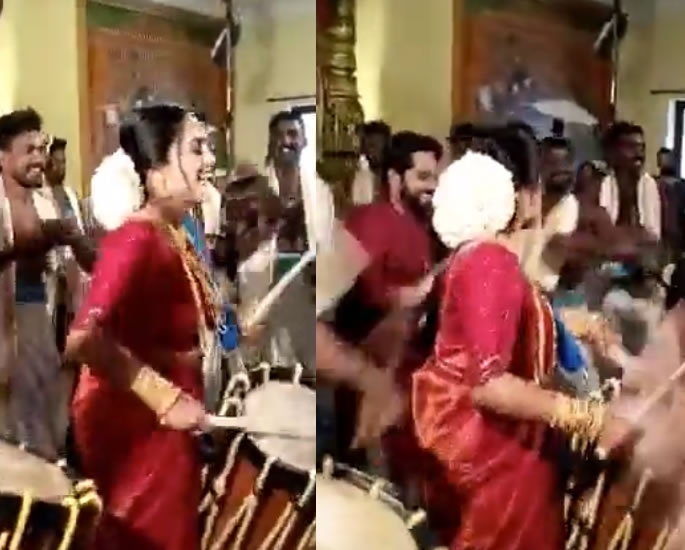 She performs for her guests with enthusiasm.

The bride moves along with the beats but when the tempo rises, the groom joins in.

The camera then pans to her father – who is seen in a green kurta – playing the chenda alongside his daughter.

A marriage function in guruvayoor temple today. The brides dad is Chendai master and the daughter plays it enthusiastically with her dad also joining at the end. The groom also seems to be participating. pic.twitter.com/VgoQbIhwhh

The video went viral and social media users were impressed, with many stating that the bride’s father is an experienced chenda player.

One said: “This is the finest Gurukul tradition on display. The father is a chenda master, and the daughter too gained mastery.”

Another wrote: “Not just awesome! The guy knows he has to play only the second fiddle (jalra) and she knows how to drum up!!! Wah re wah!

“In between, the father will come in from time to time to drum up further!!!

“The groom sure knows what he has signed up for! Clarity of thought.”

A third commented: “Beautiful, so nice to see the bride participate with full enthusiasm.”

One person said: “The joy on the faces of both bride and groom is just mesmerising.

“And her father joining at the end is just wonderful. A great one to start the day.”

One comment read: “Hats off to the bride, who is not only enjoying the instrument but also catching up with the rhythm and showing her professionalism in performing the act… Keep up the tempo.” 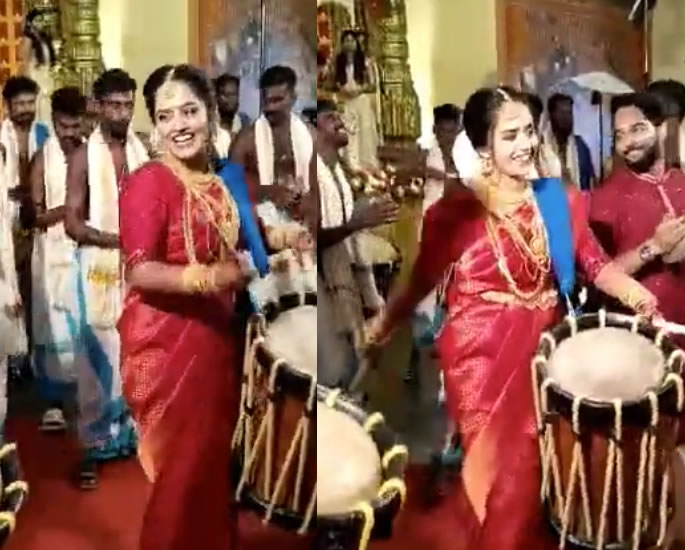 The bride is named Shilpa Sreekumar and according to her social media profile, she is a chenda performer and dancer.

Meanwhile, her groom Devanand is a native of Kannur.

The couple got married in Thrissur.

It is reported that Shilpa has trained in Pandi Melam, Panchari Melam and Shinkari Melam for the last eight years and she has performed on various occasions in the United Arab Emirates.

Her new husband is reportedly working as an engineer in the UAE.

Dhiren is a journalism graduate with a passion for gaming, watching films and sports. He also enjoys cooking from time to time. His motto is to “Live life one day at a time.”
SRK & Deepika set the Stage on Fire in ‘Jhoome Jo Pathaan’
5 Most Anticipated Hip Hop Albums of 2023