Lady K returns to LFW armed with an array of designers and beautiful garments for House of iKons. Official partners DESIblitz have all the inside action.

After a successful global launch in September 2013, House of iKons, and front lady Savita Kaye were warmly welcomed back in London for LFW S/S 2017 on September 17, 2016.

Taking place at the stunning Millennium Hotel in Mayfair, the catwalk was graced by designers from all over the world.

Guest stars included the owner of BritRox, Paul Wookey and host Jo Shah with her parents in the audience, favourites from the television series Desi Rascals.

The star that shone the brightest was Pride of Britain 2012 award recipient and Olympic Torch Bearer, Jay Kamiraz.

Each year, House of iKons partners with The Prince’s Trust to raise money and bring awareness to the work of the charity.

Savita Kaye, an appointed ambassador for the Trust, added an extra special homage to a musical iKon, Prince.

Each show started with a beautiful and touching tribute to the fallen musician. It caused a media frenzy and was aired to televisions in 76 countries and counting. 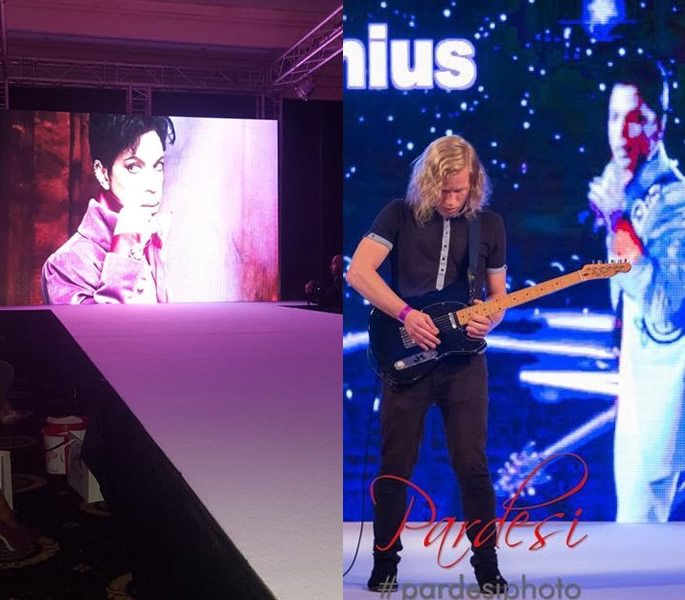 Videos saw snippets of Prince’s music and best moments to the sound of his most iKonic song, ‘Purple Rain’. It was branded with hashtags such as ‘#iKon’ and ‘#ourCenturyMozart’.

For the guitar interlude, a live guitarist came onto the catwalk to play along. Every song played or performed throughout the show was either written, produced or performed by Prince.

The catwalk played host to 21 British and international designers and their new and never before seen collections.

In the evening, the audience were in awe of the collections by Yama, Forever Devine, Shaleena Nowbuth, EmMarie by Emma Curtis, Rocky Gathercole, Raffealla, Boastie of London, Haus of MoHawk, Sajda by Suman, and Mitch Desunia. 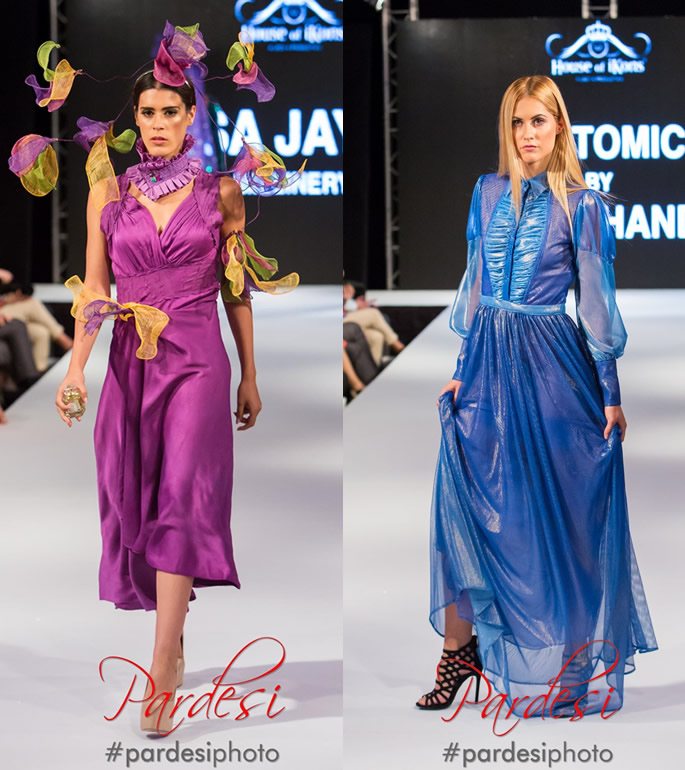 Some designers, including C-Atomic by Geeta Handa and Haus of MoHawk, had exhibition stands outside of the main event ballroom.

Alongside this, Maria Golfinopoulou shared her gorgeous collections of diamond jewellery and the fragrances of HoD Perfumes cascaded through the room.

Common themes across all designers included long-length skirts and gowns, shades of purple and vintage inspirations. Also, a lot of the outfits shown tended to be very form-sitting and figure-hugging.

The best and most well-received trend seen was the designers showing love to their family by including their children to walk on the catwalk, either with them or as a model. 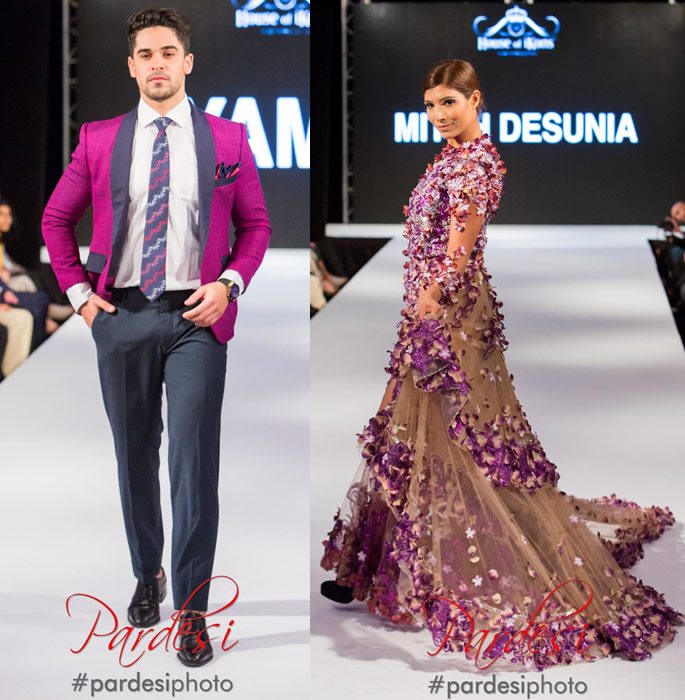 Yen from Abu Dhabi, a crowd favourite, had his pink and purple bodysuits and catsuits parade the catwalk to the accompaniment of ‘When Doves Cry’. The flesh showing designs had a common element of big pleats of fabric around the model’s necks and busts.

U.S. designer Links by Gwen bought buckets of sex appeal to the show with her skin tight outfits, chains and use of flirty feathers. The collection as a whole was very modern and mainly stuck to a purple colour scheme.

Rocky Gathercole, or “Mr Hollywood”, had a very nature-inspired collection featuring feminine florals with pearl details. There was also hints of mesh, glitter and even a few tassels dancing off of some dresses.

His clothes are worn by the likes of JLo and Paris Hilton and the work looked like a tribute to the soft, dreamy vibe of Shakespeare’s A Midsummer Night’s Dream. 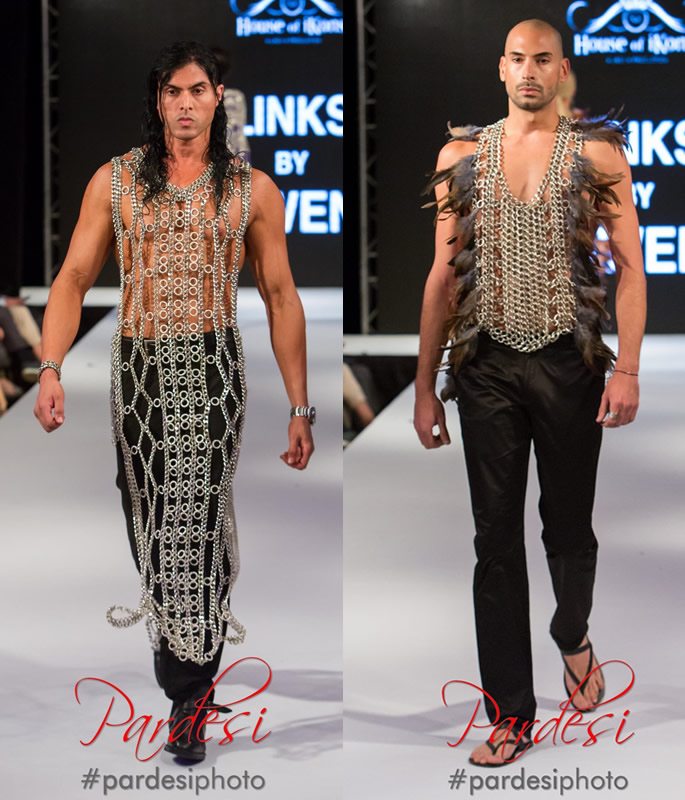 All the way from New Jersey, Punjabi designers Sajda by Suman bought ‘Indian elegance to the Western world’. An array of styles were shown in the forms of saris, lehengas, dresses and even culottes.

This collection was unique as no design was like another and the designer was reassuring that most pieces were indeed “hand stitched.”

The use of thick lace trims, different fabrics and pure attention to detail oozed elegance. A men’s range of sherwanis were also shown, together with a woman’s gown to demonstrate the look of a couple.

Hosts Rick Taylor and Jo Shah took to the forefront by introducing designers, encouraging plenty of selfies with show hashtags and informing the audience of a raffle draw with donations to The Prince’s Trust.

Every seat had an envelope on for people to donate and win prizes such as designer ballgowns, spa weekends and beautiful jewellery. 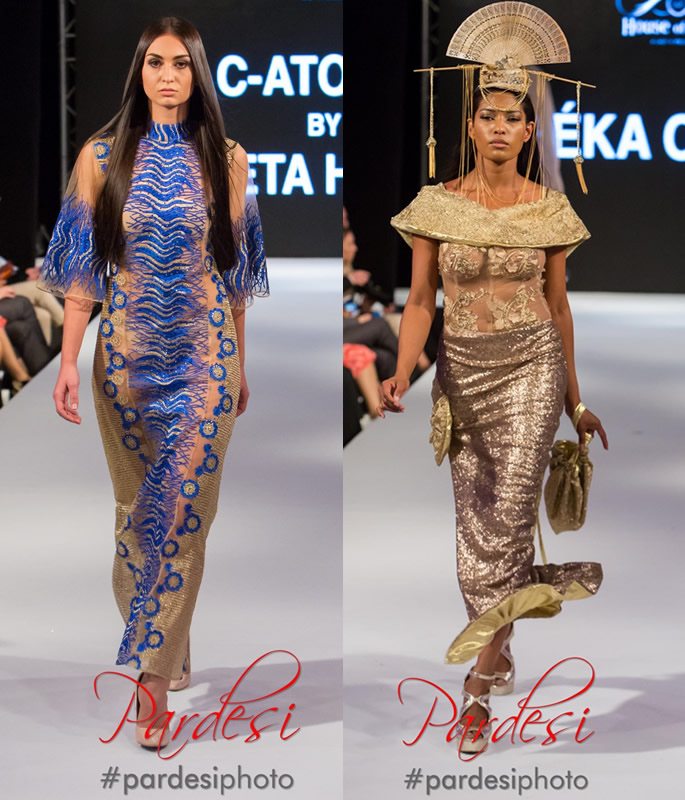 To encourage people further to donate, special guest Jay Kamiraz strutted his fabulous self onto the runway to candidly talk about his work with the charity and his own experience of needing their help. He even touched upon his love of Prince and sang a few lines from ‘She’s Always in My Hair’.

A very touching moment was when Savita Kaye came onto the runway to thank the audience for attending and explained that Prince was very special to her by helping her through “dark times… sad times… happy times, especially when [her] child was born.”

She then went on to thank BritRox owner Paul for coming and gave a lovely speech in honour of his late wife Debbie, who tragically lost her battle to cancer.

The entertainment to end the shows were the musical stylings of Tara Flanagan singing ‘When Doves Cry’ and 14-year-old powerhouse Lydia Singer belting ‘Purple Rain’. 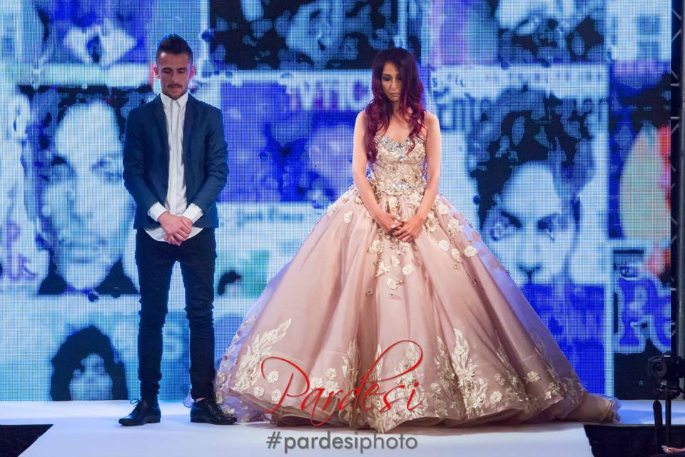 Savita Kaye truly is a visionary and inspirational woman. By giving international designers, models and musicians a platform to jumpstart their careers and the encouragement they need to see them there.

She is very excited about the future and told DESIblitz we’ll see her in “2017, back in this place.”

See more images from the House of iKons in our gallery below: