India are through to the 2017 ICC Women’s World Cup final after defeating six-time winners Australia thanks to an incredible century from Harmanpreet Kaur.

A sensational innings from India’s Harmanpreet Kaur means that India are into the 2017 ICC Women’s World Cup final.

28-year-old Harmanpreet Kaur crashed 27 boundaries on her way to an incredible semi-final match-winning score of 171 not-out.

Injury, however, prevented the all-rounder from Punjab, India, from returning to the field to help defend her side’s total.

But nevertheless, Australia’s chase began disastrously as they lost their top three for just 15 runs between them.

India are now through to the 2017 ICC Women’s World Cup final where they will face the tournament hosts, England.

For Australia, though, it’s a long flight home. The 2017 final will be just the third time in the history of the ICC Women’s World Cup that Australia will not be a part of the final.

Meanwhile, for India, it will be their first final appearance since 2005 when they lost to Australia in South Africa.

Due to a three hour delay, this eagerly anticipated semi-final was reduced to a 42 over match. India, though, won the toss and decided to bat first at The 3aaa County Ground, Derby.

India were in a precarious position in the 9th over as they found themselves 35-2 following the dismissals of Mandhana (6) and Raut (14).

Their wickets, however, proved to be blessings in disguise as they brought the arrival of Harmanpreet Kaur to the crease.

While her Test and ODI captain, Mithali Raj, struck a steady 36 off 61, Harmanpreet begun with early boundaries.

This was to prepare us for what was to come from the Indian all-rounder. Harmanpreet Kaur fired 20 fours and 7 sixes on her way to 171 not-out. In fact, she went from 100 to 150 runs in just 17 balls as she made the fifth highest score in women’s ODI’s.

It wasn’t quite all joy, though. On 98, Kaur was nearly run-out after a mix-up where Sharma didn’t turn straight away for the second run. As a third umpire decision was pending, Harmanpreet Kaur angrily threw her helmet and bat to the floor.

Speaking about the incident, the captain of the Indian Women’s T20 cricket team says:

“I told Sharma to rotate the strike, you don’t need to take the pressure, I could take the responsibility. I said sorry to Deepti Sharma. It was the heat of the moment. I didn’t want to lose her wicket or mine at that moment and I just got a little bit angry but we’re good now.”

Following an apology from Harmanpreet after a not-out decision, Sharma angrily hit back-to-back sixes. India ended their innings with a healthy score of 281-4 which Australia were never really close to chasing.

India captain, Mithali Raj, was glowing in her assessment of the India team. She says: “Harman’s innings was exceptional and the bowlers have done very well. Overall, this unit looks compact now. I’m sure Harmanpreet Kaur will want to play on Sunday, it’s a once in a lifetime opportunity.” 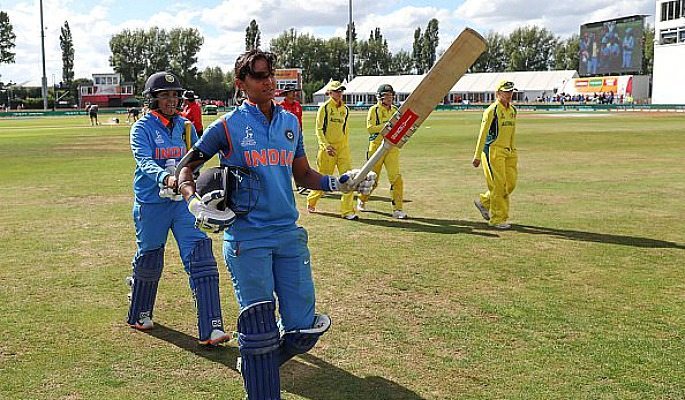 After knocking out the six-time champions, India will now face England in the final at Lords on July 23, 2017.

However, the home crowd will be expectant, and it is sure to make for an exciting Women’s World Cup final.

Follow the link if you want to relive India’s victory over Pakistan in the tournament ahead of the final. Or, you can also find out more about the evolution of the Indian cricket team kit.

You can also read about the success of Indian women in football and bodybuilding by following these links.

Images courtesy of the Official Facebook page of Harmanpreet Kaur