First the SLAM tour, then the grand box office opening weekend! Now the Happy New Year team are back with yet another promotional song, ‘Sharabi’!

After the massive promotional campaign of SLAM in the USA and UK, the blockbuster entertainer, Happy New Year has enjoyed an enormous opening at the box office scraping over Rs 40 crore on the first day and steadily becoming the fastest 100 crore entrant.

Despite this success, director Farah Khan and the rest of the HNY team have now released yet another promotional song called ‘Sharabi’ to entice their fans to visit cinemas, perhaps even a second time around.

In the latest music video, the stars declare that they don’t know the ABCD of dance, however when these sharabis (intoxicated) groove to the bhangra beats, they get your foot tapping. 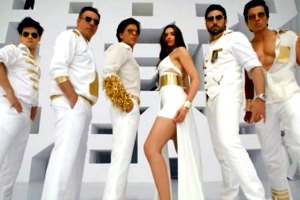 All are intoxicated and dressed in dazzling costumes, as they enjoy and dance to the beats as choreographed by Ganesh Hegde.

The best part is that the track is also a fun tribute to the actors Govinda, Jitendra, Amitabh Bachchan and Dharmendra as the Happy New Year team is seen replicating a few of their signature steps in the music video.

Simply going on this, the song is certain to be a chartbuster; and it has already enjoyed over 1 million views on YouTube in one day. 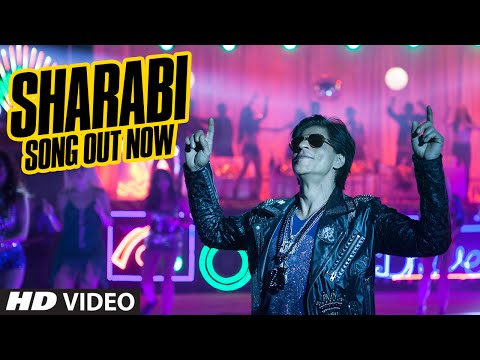 The song ‘Sharabi’ penned by Kumaar, and composed by the musical duo Vishal-Shekhar, has been sung by Manj Musik and Nindy Kaur (both formerly of RDB) and Vishal-Shekhar.

The song however landed into trouble with other RDB member Surj. Apparently, the track was initially released in 2012 by the RDB music group comprising of British brothers; Surj, Manj and Kuly. After the death of Kuly in 2012, the group disbanded.

However in the film, the song has been credited to the music composers of the movie, Vishal-Shekhar and not RDB.

Further details report that the song was sold to Red Chillies Entertainment with fake documents by brother Manj. When Surj learnt about this, he sent a notice requesting credit for the track. 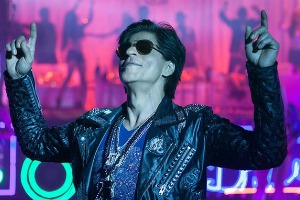 Surj told a leading tabloid: “It’s a shame that the film has been caught in Manj’s and my split.

“As the sole lead member of RDB, we continue to perform new and old hits regardless of other people claiming ownership. In spite of this, I wish Shahrukh Khan and the Happy New Year unit its deserved success.”

Ankit Khanna, who is Manj’s manager, said: “Sharabi was composed by Kuly and Manj while Surj handled the legalities and management side of the business. On papers, Manjeet Singh Ral is credited as the composer so Surj’s claims are baseless. We have all the paperwork sorted and if needed will produce it in the court of law.”

The video track was taken off YouTube and restored once the legal issue had been solved. The President of Marketing, Media and Publishing at T-Series, Vinod Bhanushali, said:

“We got the music rights from Red Chillies and we usually carry credits based on the metadata given by the producers. The track went off-air after Surj struck it down. The brothers sorted the issue among themselves yesterday and we uploaded the track with credits accordingly.”

The ‘Sharabi’ music video was not played at the theatres on the opening weekend but will now be played as the end credits roll in cinemas, showing the star cast dancing on funny moves.

It is a great ploy by Farah Khan and her team to get fans into the cinema halls and watch the film for a second time.

With such catchy beats, the captivating tune, ‘Sharabi’, will be playing in all nightclubs everywhere!

Komal is a cinéaste, who believes she was born to love films. Apart from working as assistant Director in Bollywood, she finds herself doing photography or watching Simpsons. “All I have in life is my imagination and I love it that way!”
Shanti Dynamite Bigg Boss 8’s wild card entry?
Deepika ready to romance Salman?