It was an extravagant show when the Happy New Year star cast and team launched the film’s music worldwide through YouTube’s Live Stream. DESIblitz has all the exciting details of the glamorous event.

Shahrukh Khan, both actor and producer of the upcoming film Happy New Year, is leaving no stone unturned in creating a long lasting impression on his fans and leaving them asking for more before the film’s release.

Post the exciting and different film trailer’s release on WhatsApp, the team came with another unconventional idea to launch the music album on September 15, 2014.

The HNY makers streamed the music launch event live on YouTube to accumulate the eagerness. King Khan made sure that his fans from all the corners of the world could watch it live on their computer screens. 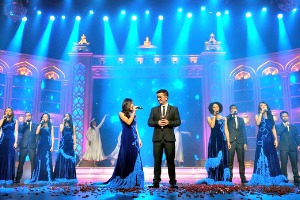 The Bollywood spectacular began with the singer Neeti Mohan’s performance on the by now the super hit song ‘Manwa Laage’. She was joined by Shillong Chamber Choir who too performed on the same song.

Their melodious song was followed by a super enjoyable performance by the ‘Chhaiya Chhaiya’ celebrity singer Sukhwinder Singh on the song ‘Satakli’.

Following that came another performance by the rapper Dr. Zeus and ‘Baby Doll’ singer Kanika Kapoor who hails from the UK. This will be Zeus’ first big break in Bollywood, and is excited to have collaborated with Vishal-Shekhar for what could be the opening song of the film.

Meanwhile, the music composer duo behind the incredible HNY soundtrack, Vishal and Shekhar, were seen enjoying the whole show with the audience. 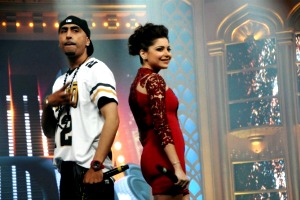 Super entertaining was the London-based digital magician Keelan Leyser, who performed some techno-magic tricks at the event and thrilled not just the audience but also the star cast of the film.

He pulled out a white rose for Deepika from his iPad as well as the blue sun-glasses which SRK is seen wearing in the HNY poster, all to the audience’s delight.

Finally came the most anticipated performance of the event – the ‘Indiawaale’ song which saw the entire star cast dancing on the catchy beats of the party number.

Deepika Padukone looked elegant in a golden net saree by Sabyasachi, while the male actors were dressed up in black high-neck formal suits.

After all the performances, it was time for the album cover to be publicly revealed. The star cast of HNY along with Farah Khan and the music team, launched the album in an extraordinary style by forming a hurdle and repeating the magical words – ‘Aabra ka Daabra’. 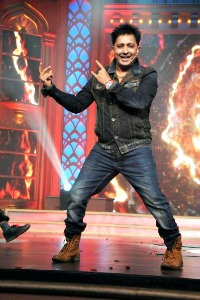 Shahrukh later confessed: “Let me honestly tell you, we 15-20 people are really sad because now the film is leaving us. So it is just the celebration of what we have done for two years.”

Speaking about the film’s music, director Farah Khan said: “Shahrukh is a great inspiration for making music because he has great songs down the years. I always go that extra mile for the songs because they are picturised on him.”

Altogether the event was a grand gala. With so much hype around the film and its events and the standards set so sky-scraping, SRK fans are expecting for the movie to be as entertaining.

Publicised as one of the biggest hits of 2014, Happy New Year is all set to hit the silver screens this Diwali, on October 24, 2014 in Hindi, Tamil and Telugu.

The HNY team will also tour in the run up to the film’s release with their SLAM concert, and will arrive in London on October 5th, 2014.

Komal is a cinéaste, who believes she was born to love films. Apart from working as assistant Director in Bollywood, she finds herself doing photography or watching Simpsons. “All I have in life is my imagination and I love it that way!”
10 Reasons Why We Love Fawad Khan
Sonam welcomes Fawad Khan in Khoobsurat