Happy Bhag Jayegi ~ The Runaway Dulhan that will Steal Hearts

Talking of witty, the film is packed with hilarious one-liners and comical situations

Prior to its release, there was not much hoo-haa about Happy Bhag Jayegi (HBJ) even though the film includes some esteemed names. One is the producer, Anand L Rai (director of Tanu Weds Manu films and Raanjhanaa).

Plus, Happy Bhag Jayegi marks the return of Abhay Deol and Diana Penty, who also share screen-space for the first time. The trailer certainly seemed promising, but how funny is this Indo-Pak rom-com?

The narrative begins in Amritsar, India. Harpreet Kaur alias ‘Happy’ (played by Diana Penty) is getting betrothed to the local contractor Daman Singh Bagga (played by Jimmy Sheirgill). As Happy is in love with Guddu (played by Ali Fazal), she jumps out of the window into a flower-truck, as the pair prepared.

Incidentally, Happy jumps into the wrong truck and ends up in Lahore, Pakistan with Bilal Ahmed (played by Abhay Deol), the son of Pakistani ex-governor Javed Ahmed (played by Javed Khan). Will Happy reunite with Guddu, or will she do another runner… This is the actual ‘masla’ of Happy Bhag Jayegi!

While the director Mudassar Aziz’s last offering Dulha Mil Gaya was underwhelming, HBJ is the complete opposite. Although it follows a stereotypical desi love story, the concept is quite fresh. The Indo-Pak link isn’t poignant as Bajrangi Bhaijaan, nor is it intense like Sarbjit. 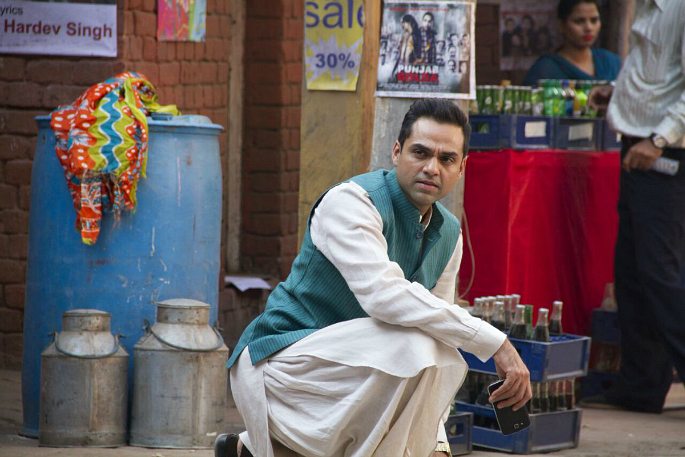 This film is just about making the audience ‘happy’. As a matter of fact, the dialogue exchange between Ali Fazal and Piyush Mishra over Urdu and Hindi, is a witty way of embracing the differing cultures.

Talking of witty, the film is packed with hilarious one-liners and comical situations. From seeing Jimmy Sheirgill dancing like Sunny Deol to ‘Yaara O Yaara’, to the scene of a Pundit conducting a Hindu wedding ceremony, whilst being disguised as a Maulvi.

There are several unique rib-tickling moments. Although in the second-half, this dips slightly since it focuses more on the ‘love’ angle.

Happy Bhag Jayegi‘s soundtrack is composed by Gunday fame – Sohail Sen. Once again, Sohail renders some decent tracks and here’s our pick. Mika’s ‘Gabru Ready To Mingle Hai’ is super-catchy. One wishes that there was another peppy track in the album! 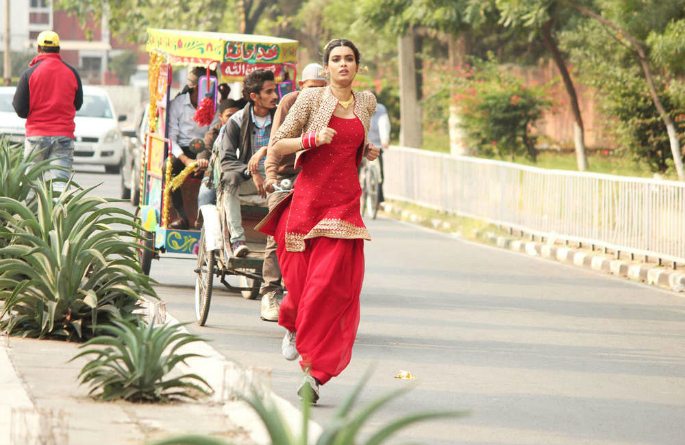 Javed Ali’s ‘Yaaram’ is soothing and weaves well into the narrative. It is reminds the listener of ‘O Saathi Mere’ from Tanu Weds Manu Returns.

Harshdeep Kaur’s ‘Happy Oye’ is perhaps the only song which reflects the craziness of Diana Penty’s character. Maybe another ‘Ghani Bawri’ is all we needed!

“It wasn’t a planned break … I felt it was better to wait and sign a film that I was happy doing,” star of the moment, Diana Penty mentions in an interview. Judging by her performance in HBJ, it seems like this 4-year hiatus since her debut has been rewarding.

From essaying the girl-next-door – Meera in Cocktail, to the girl who’ll break down your door – Happy, Diana leaves a mark.

Her feistiness as a young Punjabi kudi is reminiscent of Kangana Ranaut as Tanuja Trivedi in Tanu Weds Manu. One looks forward to see what Diana has next in the pipeline! 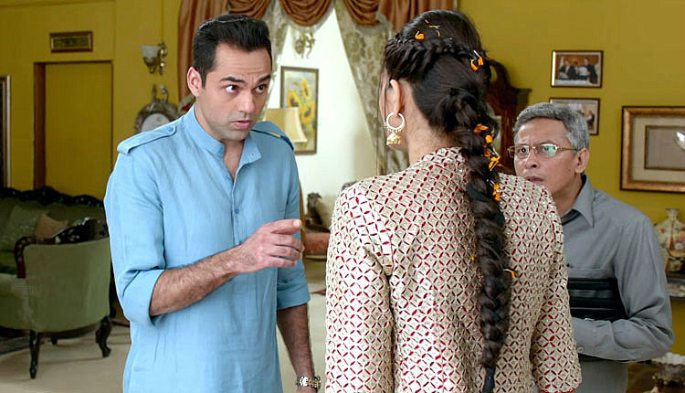 It has also been a while since we’ve seen Abhay Deol on the silver-screen. Regardless of which role he plays, Abhay adds his swag into it. Whether it’s the village-man in Manorama Six Feet Under or the rich romeo in Dev D, Abhay moulds well into every shade of acting.

Jimmy Sheirgill is no stranger to comedies. Earlier in 2016, his Punjabi film with Sunil Grover Vaisakhi List was hilarious. Once again, Jimmy shines as the comical villain. His English-speaking dialogue in the first-half has to be the highlight of HBJ!

Ali Fazal as Guddu, is decent. He seems to improve with every film. Happy Bhag Jayegi also marks the Bollywood debut for Pakistani actress Momal Sheikh. While Diana seems to take the limelight, Momal has quite a strong screen-presence.

Piyush Mishra is effortless when it comes to comedy films. His depiction of the quirky Pakistani police officer is hilarious. Parikshit Sahni, Javed Sheikh, Ayesha Raja and Jagat Rawat have good comic-timing!

Overall, Happy Bhag Jayegi isn’t your typical crazy or childish comedy. It is a witty take on two differing cultures from two sister countries, which provides wholesome entertainment for all audiences.

Anuj is a journalism graduate. His passion is in Film, Television, dancing, acting and presenting. His ambition is to become a movie critic and host his own talk show. His motto is: "Believe you can and you're halfway there."
Best Shows to Watch on Amazon Prime
Banned Pakistani film Maalik releases in UK