Futurologist’s report predicts the future of sex in 2050 to include robots, virtual reality and gender fluidity. But, how will it impact real relationships?

When looking at our evolving world and sex technology, we question what will the future of sex be like in 2050? How will it affect our relationships? Could we fall in love with robots in the future?

Today, we have apps, vibrators and sex toys, but what does the future hold? With technology evolving every day, a new report predicts sex in the year 2050 will include virtual reality sex and sex with robots.

According to Futurologist Dr Ian Pearson ‘Future of Sex Report’, our world will soon have virtual reality technology, dream sex and directly stimulate orgasms by the touch of an icon or instant message. Apparently, this will make sex easier, safer, more frequent and more fun.

Use a 3D immersive environment to interact with graphics and environment customised to your preferences, with a variety of gadgets providing the physical sensations.

VR offers to combine the best of imagination and reality. You can even use avatars as well as real people to fulfil fantasies.

It will need tools to adjust appearance and behaviour, and a range of devices to connect bodies to IT for the sex experience.

Even VR contact lenses will develop where you can see a different person than the one you are having sex with, such as a celebrity, and you can even instantly change their face or costume.

Although Dr Ian Pearson thinks most people will have virtual sex by 2030, he also says, “some might only use straightforward VR without the sex toys as part of that.”

“By 2035 toys will be better developed and most people will be well used to VR sex by then, so will have acquired a collection of sex toys that interwork with VR.”

Dr Ian Pearson predicts that a lot of people will still have their reservations about sex with robots at first, but gradually get used to them. The mechanical behaviour and their feel will improve, they start to become friends with strong emotional bonds, and any squeamishness will gradually go away.

As well as enhancing appearances, the VR is great for those who are too old or restricted to fulfil their sexual fantasies and to get their partner to do things they wouldn’t normally do.

Brothels and strip clubs will soon be using robotic dancers. The robots will be pricey, especially if it features humanlike soft materials and is able to move agile enough like a human can.

The robots even come with a customisable personality and only the emotional baggage you want. A perfect solution for people who want sex with no-strings-attached that excludes emotional feelings and commitment.

Another feature of the future VR headset is that it can be replaced by active contact lenses. Tiny lasers or LEDs will allow written images directly onto the retina.

Ultra-high definition display overlaying will replace whatever or whoever you are looking at. Controlling this could be through one’s thoughts, eyebrow muscles or simply blinking.

Can you keep the contact lenses on while sleeping? The Contact lenses would lie under your eyelids so you could still see images with your eyes closed.

Whilst sleeping, they could be linked to a computer that detects when you are in a dream state, what images you are seeing, and then injects images or video to enhance your dream.

Go one step further and link your dreams to others dreaming at the same time, with a sort of dream-based sex hook-up. 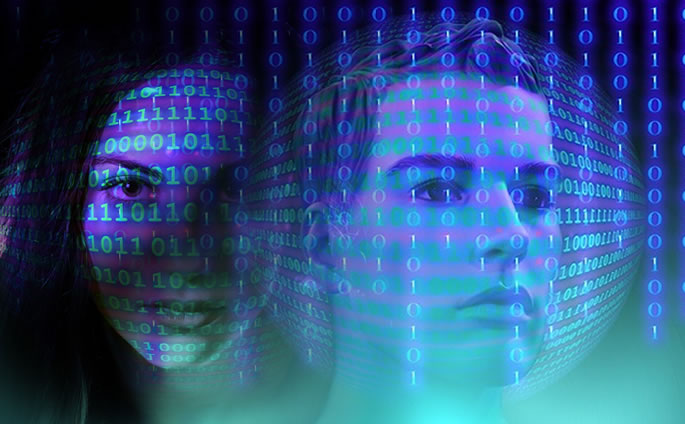 As a face or costume can be customised and changed at an instance, so can the gender. Therefore, you might sometimes have sex with one gender, and sometimes another.

With the whole nature of sex left to engineering and imagination, new sexes can also be created too, including new kinds of genitalia, gender roles and behaviours.

Gender fluidity with robotics is definitely a debated subject.

According to Alan Winfield, a Professor of Robotics at UWE Bristol, he has some “serious doubts about the morality of designing and building robots to resemble men or women, boys or girls”.

He says that designing a robot with a gender is deceptive. Giving robots a gender does not have “any meaningful sense”.

Therefore, he feels by “gendering and especially sexualising robots we surely objectify”. Meaning the robots are no longer an object but a sexual representation of a woman or man.

Hence, he says “sexualised robots will surely only deepen the already acute problem of the objectification of real women and girls”.

So, non-gender specific robots could well be potential sexual partners in the future.

The notion of gender may be secondary in the future versus sexual attraction.

Obviously, people will still have sex if they want to have a baby, but will relationships be more than just sex? Will people still date and have fulfilling relationships or will sex become a recreational activity which also engages technology?

As generations become more modern and their trust in technology increases, it could be possible that countries in South Asia will accept these technologies developed for the future of sex much more readily.

Especially, due to the larger populations and higher use of technology compared to countries like the UK, where it is taken for granted and use by British Asians is different too.

However, doubt arises when questioning if new technology in sex in the future would it fit into cultural ways and how it would impact on real relationships and marriages.

“Culturally we are never going to accept things easily. Look at how strong arranged marriages are still in our communities! So, unless aunty ji is going to find me a suitable robot, it looks like I’m happy with trying to find a real man!”

When looking at marriages, does having sex with robots mean people can have robot marriages?

“When I think of robots I think of transformers and marrying one of them will be extremely weird!”

When asking ourselves whether real marriages deplete, 20-year-old Amrick says:

“Even though there are a lot of advantages of having robots as partners like having an emotionless and uncommitted relationship, there are still things a human can do that robots cannot like having human children.”

Surely, having your partner’s face or body substituted by avatars will affect their confidence. While having robots as a partner may have its advantages, what about what humans can do that robot can’t such as foreplay, real touch and kissing?

“Robots will not be more than a household object or secret belonging people will have an never admit to. Humans cannot be attached to something so inanimate compared to a human. So, marrying a robot is just laughable.”

How sex in the future involving new technology will impact on real relationships remains to be seen but there is no doubt there are changes ahead in the way we interact sexually for sure.

You can read the full Futurizon report here.

Henna is an English literature graduate and lover of TV, film and tea! She enjoys writing scripts and novels and travelling. Her motto is: "All your dreams can come true if you have the courage to pursue them."
The Changing Trend of Tattoos among South Asians
Indian Student Bullied for being Overweight Loses 42 kg