The top term was ‘Indian aunty with young.’

Whilst the USA dominates the traffic trends, India calls in at 4th rank. The average time spent on the site by people in India is 8:20 minutes. This has decreased from 2015 by 1:10 minutes.

This may surprise some, but taboo areas are more often searched because there is more of a fantasy involved with engaging in sexual activity with people it is not considered natural to be with. 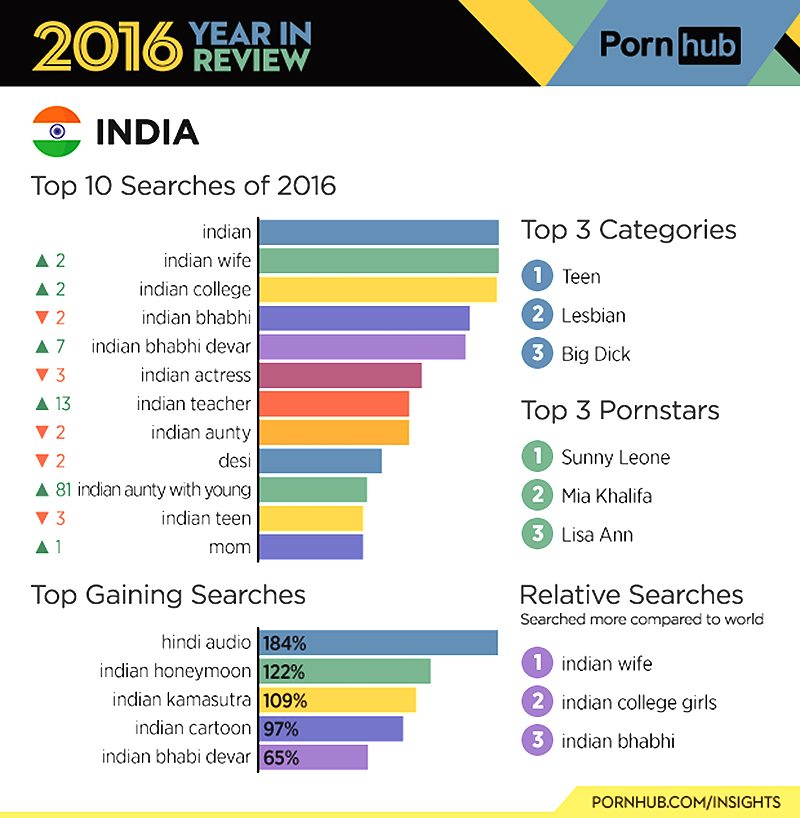 In the review of India, the report said:

“Most countries take great pride in their nationality, but India takes it to a whole other level.”

Ages 18-24 year-olds- take up 48% of Pornhub’s traffic from India. The mobile traffic of India is a massive 70%, as smartphone technology in India becomes the highest way of people visiting the site. This is even higher than the UK’s 60% viewing rate from mobiles.

“One thing is certain; the typical ‘in-out, in-out’ no longer satisfies the masses, who are clearly looking for something different.”

The UK appears second to the USA for most traffic to the website.

In the top searches for both London and Birmingham, terms include: ‘Indian teen’, and ‘Pakistani.’  ‘Pakistani’ and ‘UK Indian’ are ranked very high on the most searched list for Birmingham.

Even events like the Olympic Games, Snow Storms and the Presidential Election affected the traffic on the website.

Alima is a free-spirited writer, aspiring novelist and insanely weird Lewis Hamilton fan. She's a Shakespeare enthusiast, with a view: "If it were easy, everyone would do it." (Loki)
Netflix and Amazon Prime rivalry Heats Up in India
Resident Evil 7 Biohazard ~ Reinvention at its Finest