Ahana Deol married business-man Vaibhav Vora in a star-studded wedding reception in Mumbai on Sunday 2, February. The first Bollywood wedding of 2014, it was attended by the who’s who of the film industry.

"Like a true Hindi film my daughter's wedding will have two halves."

Following her engagement in summer 2013, daughter of Dharmendra and Hema Malini, Ahana Deol, has completed her marriage nuptials with Delhi businessman Vaibhav Vora.

The wedding, which was held in Mumbai on February 2, 2014, saw a star-studded guest list, with much of Bollywood and many notable politicians and personalities coming out to join Hema and Dhamendra in their celebrations.

The ceremony itself was a grand affair, and considerable effort was made to ensure that the younger sister of Esha Deol enjoyed a magnificent fairytale wedding. 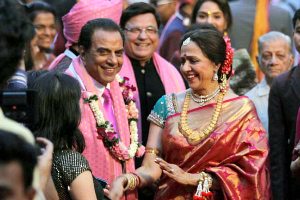 With her parents of different backgrounds, Ahana’s wedding was made up of a half-Punjabi and half-South Indian ceremony. Happy mother of the bride, Hema Malini explained:

The wedding took place over three days. First was the mehndi ceremony on Friday 31, January, followed by a Sangeet party on Saturday 1, January. The baraat and reception took place the following day.

The baraat proceeded with full Punjabi flair from the Hyatt Regency to the wedding venue. The lucky groom, Vaibhav arrived in an eye-catching horse carriage fit for the fairytale occasion. 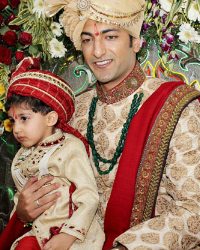 Beginning at the ISKON temple, the couple sought blessings. Later they went to the ITC Maratha hotel in Mumbai where they carried out their ‘pheras’, and also later had the wedding reception.

Veteran legend and father of the bride, Dharmendra wore a chic black suit and carried out the ‘kanyadaan’ ritual, while the ever-elegant Hema was draped in a beautiful mint green kanjivaram saree.

Ahana wore a stunning Manish Malhotra floor-length anarkali gown of peach and silver at the evening reception, with diamond baubles and her hair up in a braided bun. Her new husband, Vaibhav wore a black sherwani with a pleated Patiala shalwar to match.

Older sister Esha Deol opted for a non-traditional one-shoulder gown by Amy Billimoria. Esha sadly had suffered a shoulder injury in the run-up to the wedding and spent most of the multiple ceremonies in brightly coloured matching arm casts.

Attending the reception were close friends of Dhamendra and Hema, including their Sholay (1975) co-stars, Amitabh and Jaya Bachchan. Joining them were Abhishek and Aishwarya Rai Bachchan who looked beautiful in a pink suit that matched her mother-in-law’s saree.

Continuing the Bollywood train, the likes of Rekha in a stunning kanjivaram saree of blue, green and golden hues. Also attending was Jeetendra in a maroon velvet waistcoat, Asha Bhosle, Javed Akhtar with wife Shabana Azmi, Ramesh Sippy and his wife Kiran, completing the Sholay quota. 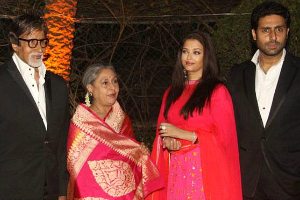 Of the newer and younger crowd were Dia Mirza, Ranveer Singh, Deepika Padukone and Sonakshi Sinha.

It wasn’t just B-town who gathered for celebrations, politicians also emerged to join the first celebrity wedding of the year. 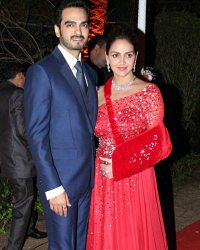 While it may not come as a surprise to most, step-brothers Bobby Deol and Sunny Deol were nowhere to be seen.

Rumours that they might miss the wedding had already begun to make their rounds a few days before the ceremony, and it seems that they became true by their absence. Dhamendra’s nephew, Abhay Deol, however did attend and was in the family photo.

Tensions between Dhamendra’s two families from his first and second wife are no secret; Sunny and Bobby famously missed Esha’s wedding in 2012 when she married Bharat Takhtani, a Mumbai-based businessman. They claimed that rigid shooting schedules were the reason they could not attend.

Interestingly, it was at older sister Esha’s wedding where Ahana met Vaibhav and they instantly hit it off.

But while family politics will always be part and parcel of any big Indian wedding, Ahana and Vaibhav have much to look forward to with future marital bliss on the horizon. Congratulations to the beautiful couple.

Aisha is an editor and a creative writer. Her passions include music, theatre, art and reading. Her motto is “Life is too short, so eat dessert first!”
It’s One By Two for Abhay Deol
Parineeti is crazy in Hasee Toh Phasee