A delivery driver won a luxury Mercedes worth £189,000 in a competition. He believes the win is due to his mother “looking down on me”.

An ecstatic delivery driver from Birmingham has won a luxury Mercedes plus £50,000 in cash.

Saleem Chaudhary, from Erdington, was “stunned” when he was approached by Virgin Radio presenter Christian Williams, who also works for BOTB.

Christmas told Saleem he had won the top prize in the company’s dream car competition.

Saleem opened the boot and was left “shell-shocked” as he discovered a further £50,000 in cash.

Saleem said he will keep the car and give the money to his sisters.

The lavish prize came just before his 32nd birthday. He believes it was down to his mother, who had passed away earlier in 2022.

He said: “I lost my mum in July so the last few months have been incredibly hard for us all.

“Mum had a lot of ill health throughout her life and my sisters brought me up really, so I’m going to give the cash to them so we can all enjoy this win together.

“It’s my 32nd birthday later this month and my mum must have been looking down on me. I know this is from her.”

Saleem has been playing BOTB’s ‘dream car’ competition for the last three years, missing just one week of entries in that time. 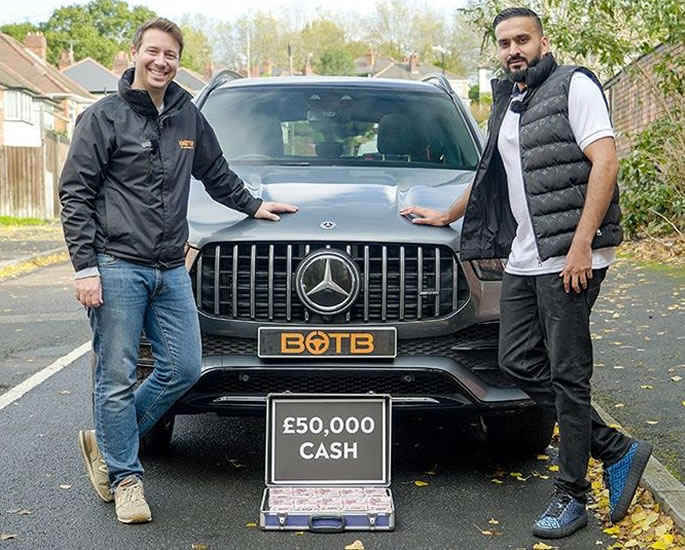 He said: “I’ve always loved my cars – my dad was a huge Mercedes fan, so to be honest those are the only cars I’ve ever played for.

“And of course, I was hoping that one day it would be my turn, but when Christian turned up I was just speechless.

“Nothing can prepare you for that knock on the door.”

The Mercedes Brabus is said to be “favoured by celebrities and royalty alike”.

Christian said: “This really is a beast of a car, and while Saleem was shocked into near-silence when we showed him the prize we know he’s going to enjoy every minute of it.”

He found out he had won the grand prize when Christian turned up at Ilett Estate Agents to reveal the news.

William Hindmarch founded the competition in 1999. Since then, it has given away over £48 million worth of luxury cars and lifestyle prizes.

BOTB is listed on the stock market and has a high-profile stand at airports although most people play online at BOTB.com.

Dhiren is a journalism graduate with a passion for gaming, watching films and sports. He also enjoys cooking from time to time. His motto is to “Live life one day at a time.”
Does Mia Khalifa ‘Scam’ OnlyFans Subscribers?
Imran Khan shot in ‘Assassination Attempt’