An estate agent was left “speechless” when he won a £91,000 Nissan GT-R after entering a competition. He said the win “lifted” his spirits.

An estate agent from Birmingham won a £91,000 Nissan GT-R Recaro in a competition after buying a £2 ticket.

Jay Khan had been on a work call when he received the good news.

The 29-year-old from Great Barr was so shocked, he immediately hung up and left his desk.

Jay, who works at Ilett Estate Agents, paid just £2 for a ticket into the draw for the sports car with online competitions company BOTB.

Jay, who also runs Ruchie Indian restaurant in Norton Canes, said winning his dream car had “lifted” his spirits after struggling during the Covid-19 pandemic.

His restaurant has been forced to close several times due to government restrictions.

Jay said: “Things like this don’t happen to me. It’s been a very tricky 18 months.

“Our restaurant had to close a few times because of Covid-19 and it put us all under pressure, financially.

“We’re back open now and things are looking brighter. I’ve been close a few times. But I never expected to win.”

Jay, who is getting married in 2022, now hopes to take the Nissan GT-R across to the Isle of Wight for a drive.

He found out he had won the grand prize when BOTB presenter Christian Williams turned up at Ilett Estate Agents to reveal the news. 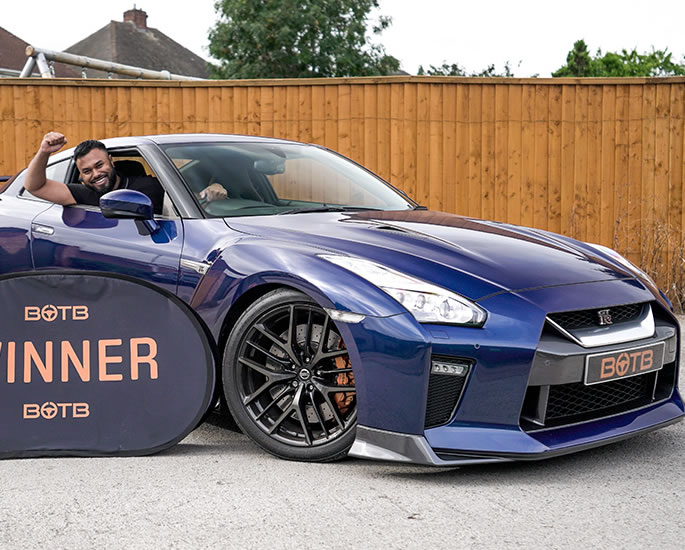 Jay, who had been playing BOTB for just over a year, said:

“I just never thought something like this would ever happen to me.

“This has just lifted me up again, it’s a dream come true, honestly. If I can win, anyone can win.”

The Nissan GT-R Recaro Jay has a 637 Torque engine which boasts 565bhp.

Christian said: “I love my job getting to surprise the lucky BOTB winners each week and this week was no different when we got to go to Birmingham to meet Jay.

“He played for a fantastic prize and I’m super excited for him to get behind the wheel.”

BOTB hands over the keys to two stunning cars each week as well as a lifestyle prize.

One previous winner was Hussain Patel from Blackburn who won a £22,000 Abarth 595 Competizione in March 2020.

Hussain and his wife had been looking to get a second family car as she was due to finish maternity leave after the birth of their second son.

However, they decided to wait due to the uncertainty created by the Coronavirus.

Hussain said: “I was in bed when I got the videocall from Christian.

“I was quickly up and about celebrating with the family. I just could not believe that I had won the car.”

Dhiren is a journalism graduate with a passion for gaming, watching films and sports. He also enjoys cooking from time to time. His motto is to “Live life one day at a time.”
Rajasthan cuts off Internet to Prevent Cheating in Exams
Man charged with Murder of Sabina Nessa