Married financial consultant, Sanjay Naker, has been jailed for raping and sexually assaulting a teenage girl who was drunk and vulnerable.

"Naker deliberately targeted his victim as someone intoxicated and vulnerable."

Sanjay Naker, aged 28, a married financial consultant, from Wood Green in London, has been jailed for eight years after he forced a drunk 18-year-old girl into a filthy dark alleyway to rape her.

On Thursday, July 5, 2018, Sanjay Naker was found guilty by the jury at Inner London Crown Court, of three counts of oral rape, one count of attempted rape and one count of sexual assault.

Naker a consultant at PriceWaterhouseCoopers (PwC), saw the women being told to leave the Number One nightclub in Tolley Street, SE1 on the night of March 11, 2017, because she was too drunk and not able to stand up.

A bouncer was ejecting her after she had spent the evening drinking vodka and champagne in the VIP area of the nightclub.

At his hearing, the court heard that Naker then started to chat with the victim outside the bar.

Footage from CCTV showed them having a conversation at about 4.00am early in the morning and then Naker is seen to be showing concern by helping her up from when she fell. He then offers his jacket to her and is even seen giving her a piggyback.

Subsequently, Naker tries to kiss the girl but she pushes him away. Persistently he tries to pull her into the opposite direction of where she was trying to go.

At one point, the drunk victim falls from Naker’s back and bangs her head on the ground. He then begins to drag her along by the arm.

Naker then succeeds in dragging the victim to a filthy secluded area of The Queens Walk, London Bridge, where he could carry out his sexual attack.

Naker stripped the girl from her waist down as she lay in a very drunk and semi-conscious state on the urine-soaked ground of the alleyway. He then raped her and sexually assaulted her a number of times, for about 30 minutes.

It was a passerby who saw what was happening at about 4.45am, who went and stopped him. The witness saw the half-naked girl lying on the ground unconscious and Naker standing above her pulling up the zip on his trousers. 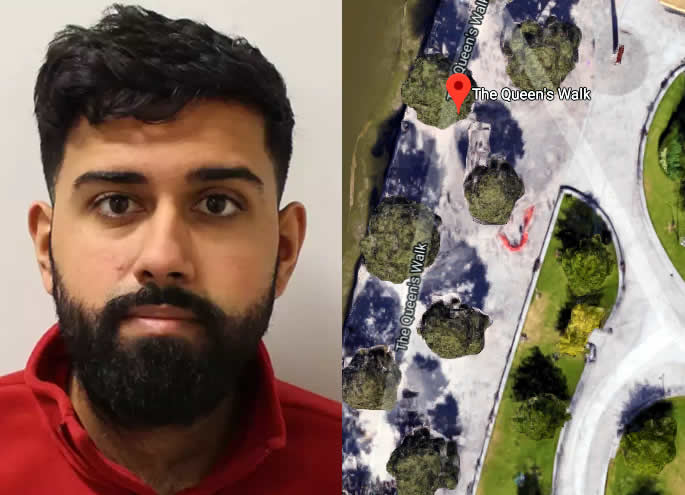 Having seen the dubious activity on CCTV, security staff who worked nearby went to the scene.

They were told by Naker that he met the victim in a club and he gave them his details and left taking a taxi back to his marital home, where his wife of two years was asleep.

When the staff found the victim on the ground not wearing her underwear, they called the emergency services.

Police and paramedics arrived at the scene and the girl was immediately taken to a hospital. She was then taken to a Haven where it was concluded that she was a victim of rape and a sexual attack.

Police put out a warrant for his arrest and he was taken into custody the next day.

Prosecutor Neena Crinnion talked about Naker’s persistence to assault the victim and said:

“Mr Naker gets hold of her and drags her along the walkway. When passers-by come along, he leaves her alone but as soon as they are out of view he goes back to get her.”

The court heard that Naker had been drinking in the area with people from work and when he tried to enter the club he was denied by bouncers.

When he was asked why did he not tell the passerby that he had sex with the woman, Naker said that he:

Naker’s family who stayed away from the trial, sobbed as he was found guilty and jailed for the rape offences.

“You have a respectable life who had a good future ahead of you, with your background you have a network of caring friends and family.

“If you formed a view that the woman wanted to have sex with you, you were very much mistaken.

“It was quite clear that you decided that you wanted to have sex with her and she had no recollection of what happened but you saw an opportunity.

“It was a mixture of your own desire and arrogance regardless of any intoxication on your part.”

Detective Constable Aidan Kersley who was the Investigating officer, from the Met’s Child Abuse and Sexual Offences Command, said:

“Naker deliberately targeted his victim as someone intoxicated and vulnerable.

“After talking to her for a matter of minutes, he managed to drag her to a secluded area where he raped her. She has no memory of what happened.

“This case shows that no matter what the circumstances, we will work tirelessly to bring rapists and sexual offenders to justice. Anyone who sadly finds themselves in similar circumstances should take courage from this case and the conviction we have seen today. Our officers are experienced, highly trained and treat victims with the sensitivity and compassion they deserve.2

The victim is now very anxious and scared about having relationships and is living reclusively.

Besides his guilty verdict and imprisonment on July 5, 2018, Naker was put on the sex offenders’ register for life but cleared of an additional charge of assault by penetration.

Amit enjoys creative challenges and uses writing as a tool for revelation. He has major interest in news, current affairs, trends and cinema. He likes the quote: "Nothing in fine print is ever good news."
Father and Twin Sons sentenced for Selling Drugs from Home
Indian Man shoots Himself to Prove Love to Girlfriend’s Father