The fifth episode of Indian Summers invited a new political twist to Simla’s brewing revolution. More secrets are revealed for our British and Indian characters. DESIblitz has more.

“Breaking bread with an Untouchable guest... I'm disappointed in you.”

Ralph and the Viceroy decide to engage discussions with the Untouchables, in an attempt to thwart Gandhi’s Congress Party who are gaining momentum and popularity among the natives.

Ralph has unconvincingly made up his mind up about Madeleine, although he is still unsure whether the impending marriage is out of love or career gain.

The Viceroy hosts an engagement party in their honour and invitations are sent out to all, including Aafrin and Leena.

Ralph naturally uses the engagement party as an attempt to further his political campaign against Gandhi. 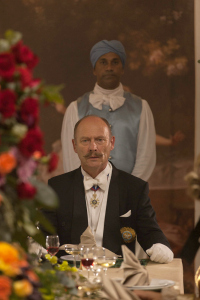 In a bold move, he invites an Untouchable, Dr Kamble, much to the angst of the Viceroy, who says to him: “Breaking bread with an Untouchable guest… I’m disappointed in you.”

Ralph in his so-called sincere façade believes he is doing the right thing, but it is clear that he is playing with fire, at the expense of the traditions of the Indians that have stood resolutely for centuries.

While the issue of cast and untouchables is a delicate one, Ralph’s stubbornness to bulldoze through hierarchal structures is a perfect example of the British indifference towards those they have colonised.

As Ralph says: “If we win over the untouchables, we smash any chance of a deal between them and Congress!”

Ralph has made many promises to Dr Kamble, who recalls how his father was killed for simply drawing water from a community well. Ralph uses the underdog to his advantage, and offers the chance to be represented in Parliament.

But Kamble is not convinced: “You have been here 100 years. Why after all these years do you wish to help?” 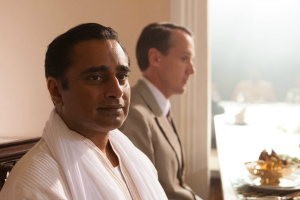 Kamble reluctantly agrees to the engagement party, but as expected, the Brahmin Maharajas are keenly offended and even the servants refuse to serve him.

Ralph appoints Aafrin to take care of Kamble, and although he is unsure of what to say to him, Aafrin soon finds that he has more in common with the untouchable than he initially thought.

Ralph is not the only one who is attempting to manipulate social structures; Sarah is also keen to work her way up the social ladder and she exploits her dirt on Alice to gain a seat near the Viceroy at the head of the table.

The engagement itself turns into a sordid affair, the ‘supposedly’ happy couple are dressed as Marie Antoinette and King Louis, and the makeup and wig of Ralph simply adds to his many masks and guises.

Following their intimate encounter in the previous episode, Alice feels betrayed by Aafrin for having stolen the forged evidence from her bother. The alarmingly close relationship between Alice and Ralph is uncomfortable at best and borders on incestuous. 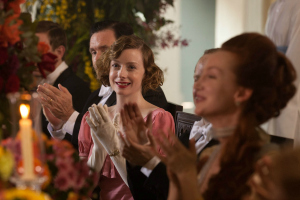 But later at the end of the episode, Aafrin’s frustration at being used as a puppet for the British leads to an outburst. Their desire for each other finally ignites and they share a passionate kiss among the foliage.

This of course does not bode well for sweetheart Sita, who is lying about giving Sooni Aafrin’s letter. Aafrin’s mother severely disapproves the relationship between the two and insists that Sita is a disgrace.

But Aafrin’s father Darius (played by Roshan Seth) is more opened minded: “I imagined her to be a larger girl!”

Interracial and interfaith love also extends to Leena and Dougie. Since Dougie’s confession to Sarah, he has been doing his best to avoid going to the orphanage school and Leena is naturally upset.

Her new friend Alice however sympathises with the two, and tries to encourage Leena to accept her love for him: “He is in love, but so are you, that’s all there is.” But the stunningly dressed Leena runs away from the party to avoid Dougie. 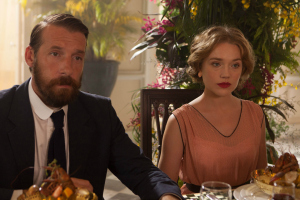 The feeling of a ‘Britisher’ working for a native is nicely highlighted and explored in Indian Summers. Ian is still dealing with landowner Ramu, and is confused as to why the Indian wants to employ him.

Ramu’s response really undermines the philosophy of British imperialism as he twists the ‘superior than thou’ mindset to his own advantage, much to the surprise of both the viewers and Ian:

“I am a businessman. I do not want you, but your name. I will raise you from your ignorance, teach you how to make this land pay.”

Cynthia who refuses to have Ian working for a native, still tries to dissuade Ian, but Eugene inadvertently blindsides her with an unexpected bombshell.

Following a series of poor money choices, Eugene is now penniless, which means that Ralph’s new fiancé Madeleine has no money to her name. Will a severely annoyed Cynthia now break the union, which she has worked so hard to create?

The end of the episode confronts yet another well-kept secret by Ralph that unravels in a climactic end. Adam has reunited with his homeless mother. But she is both forceful and desperate, making us worry for the young boy.

Keen to expose Adam’s father, she aggressively says: “We will make your father see … you don’t know suffering.”

But as she gate-crashes the party, Ralph sees her and orders her to be taken away amidst screams before Madeleine has the chance to notice what is going on.

Will Ralph be able to execute yet another cover-up? Indian Summers returns on Sunday 22nd March, 2015 at 9pm on Channel 4.

Ranveer thinks Shahrukh Khan is the Perfect Man!
PREMature has a ‘Tripping’ time with Consequences