Mumbai-born Chef Cyrus Todiwala has urged restaurateurs to up their game when it comes to healthy dishes and quality ingredients. DESIblitz reports.

Popular Indian chef Cyrus Todiwala had a key message for restaurateurs during the Asian Catering Federation roadshow in Bristol in May 2016: “Don’t buy cheap.”

The Mumbai-born chef, who received an OBE in 2010, stressed the importance of restaurants focusing on higher standards and better quality ingredients rather than competing on price, as the motives of the consumer market have changed.

Modern diners expect healthier, higher quality meals, catering to a range of dietary specifications. A rise in gluten free, vegetarian, vegan and paleo diets have seen a response from some restaurants altering dishes to meet these new dietary paradigms.

Todiwala warned against the use of harmful food colourings and corn oil, and that chefs should lower the amounts of salt and sugar in recipes. Food lovers are willing to pay more for better quality dishes, he assured.

Traditional Indian recipes are reasonably healthy, but the takeaway favourites of the UK’s curry fanatics are often quite bad for you. A lot of locations use artificial colourants in their most famous dishes, especially the iconic deep red hue of tandoori chicken.

The UK is one of the fattest countries in Europe, statistics taken from the 2014 Health Study for England found that 61.7% of adults in the UK are classified as overweight or obese. 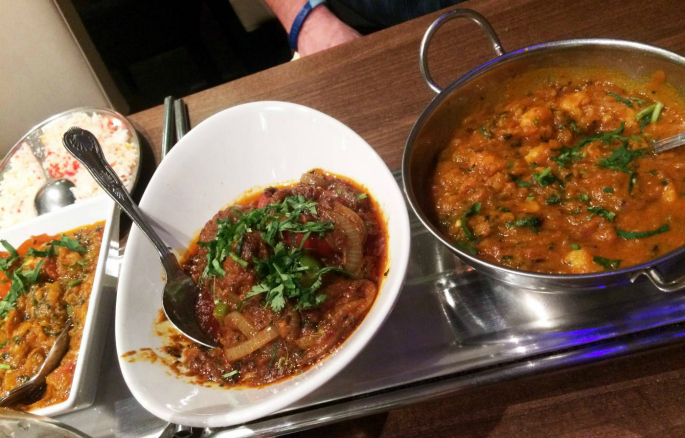 But the move towards healthy eating has gained popularity thanks to the efforts of social media platforms, and the campaigns of TV chefs like Jamie Oliver, and Todiwala’s own work.

Changing consensus on the stigma of healthy eating has encouraged more people to think about their own diets.

Meat and dairy free diets have gained popularity thanks to celebrity endorsement, and the ‘paleo’ diet is the latest craze, whereby the consumer eats only what would have been available in pre-arable hunter-gather societies.

Paleo dieters can’t eat processed crops, and certain meats are off limits too, the diet is purportedly the most effective way to maintain a healthy lifestyle as it only contains foods that the human body is naturally inclined towards.

Gluten free diets have also become popular, some 15% of the public avoid any gluten in their diets completely.

Studies into the effects of gluten on the body have shunned consumers away from conventional wheat and rice based cuisine in the pursuit of dietary well being.

There is a definite rising trend in low-carbohydrate, high-protein diets, with around 3.8 million people in the UK describing themselves as ‘part vegetarian’, according to nutritionist Ruth Tongue MSc.

22% of the public claim to have allergies or are intolerant of certain foodstuffs, and 67% of polled customers said that they want to see the caloric information on menus.

The popularity of these dietary paradigms have given mainstream restaurants and takeaways a perfect opportunity to improve the standards of their craft.

The UK takeaway industry has remained strong in the wake of an economic recession, responsible for 220,000 jobs and is worth around £9 billion to the UK economy.

Its continued popularity means that the onus is on restaurants to set an example by making their dishes healthier, and with better quality ingredients.

Being health conscious needn’t be a compromise, however, as Todiwala advises subtle changes to recipes that will make a big difference.

A Delicious Chicken Dopiaza recipe
Where can Vegans get their Protein?