The Celebration of Raksha Bandhan

The festival of Raksha Bandhan strengthens the bond, love between brothers and sisters. As the sister ties rakhi, the brother pledges to protect her always, DESIblitz finds out how British Asians celebrate it each year.

"We plan to go out for a brother-sister date which includes movie, shopping and dinner!"

Raksha Bandhan, also called as Rakhi Purnima is a festival of brothers and sisters.

It is widely celebrated in India, Pakistan and a few other neighbouring countries.

Raksha Bandhan in Sanskrit literally means ‘the knot of protection’.

How is Raksha Bandhan celebrated?

On the day of Raksha Bandhan, sisters tie Rakhi (the sacred thread) on their brothers’ wrists. It is believed that the Rakhi is a blessing which gives the brother the power to fight against evil.

The customs are performed and as the sister ties Rakhi, she prays for the well being and happiness of her brothers. 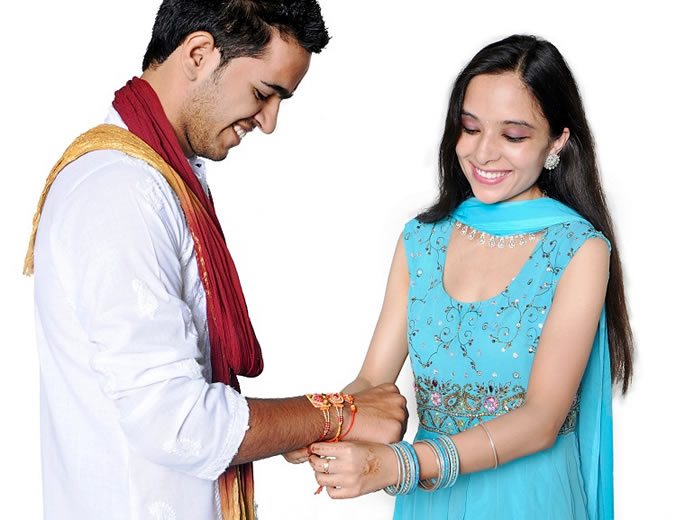 In return brothers promise to protect the sisters from all the evils of the society and always be by her side. The brothers usually gift something to their sisters as shagun in the form of money, clothes, or chocolates.

The festival is a prehistoric event and has several myths and legends attached to it.

The legend of Indra Dev: A myth is that once there was a war between the Gods and the demons where in the King of Demons had overpowered Lord Indra Dev.

Then, Devi Sachi (wife of Indra) tied the sacred thread around Indra’s wrist. It is said that the thread gave Indra the power to defeat the demons.

The legend of Goddess Laxmi and King Bali: On defeating King Bali, Lord Vishnu was requested to take his place by Bali himself. However Goddess Lakshmi (wife of Vishnu) wasn’t happy with this and wished to go back to Vaikuntha. 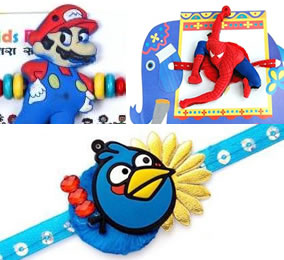 She tied a Rakhi to Bali’s and in return asked for the permission to send them back to Vaikuntha. King Bali happily accepted his sister’s request.

Legends of Mahabharata: As the myths suggest, during the period of Mahabharata, Draupadi tied Rakhi to Lord Krishna for her husband’s security and welfare and Mata Kunti, too tied Rakhi to her grandson Abhimanyu for his protection before the Great War.

Rakhi of course plays a crucial role in the Raksha Bandhan festival. As the day of the festival approaches, sisters start buying a variety of Rakhi threads for their brothers.

Times have changed and festivals are more commercialised these days. Apart from the typical ‘Traditional Rakhi’ that you can find, there are also some very unique Rakhis in the market.

DESIblitz also asked a few Brit Asians on how they usually celebrate Raksha Bandhan each year. Chaitrali Chitre from the West Midlands has a unique way to start off the celebrations, says:

“Every year I first tie Rakhi to Lord Krishna. This year since I’m away from my brothers, I have already posted them a Rakhi along with handwritten letters. I will also tie Rakhi to my husband and kids on behalf of their sisters who are in India.”

Swati Sharma too, who is away from her brother is requesting her cousin sister to tie Rakhi to her brother on her behalf. She plans to fast for the day to pray for his well-being and happiness.

Rohan who lives with his sister said: “I will be pampering my sister all day long. We plan to go out for a brother-sister date which includes movie, shopping and dinner!”

Many others who are away from their brothers are planning to spend the day on Skype. Few are sending Rakhis in the form of e-greeting cards.

The Raksha Bandhan festival symbolises love, conviction and and promise between a brother and sister to be there for each other. The festival celebrates the coming together of families and the blessed bond between siblings and cousins.

DESIblitz wishes all the brothers and sisters a Happy Raksha Bandhan!

Komal is a cinéaste, who believes she was born to love films. Apart from working as assistant Director in Bollywood, she finds herself doing photography or watching Simpsons. “All I have in life is my imagination and I love it that way!”
Include Me TOO highlights Asian Disability Stigma
Big Drop in A Level Results