Drinking trends among British Asians is changing – with more emphasis now on young Brit Asian women who like to enjoy a drink or two on a night out. DESIblitz explores the stigma surrounding alcohol and women, and how lifestyles are changing.

Such types of drinking was not the case in earlier generations.

Drinking alcohol and a high consumption of it, has been associated with Brit-Asian men for many generations but today the trend is veering towards young Brit-Asian women.

Changes in lifestyle, more personal freedom, professional careers, increased socialising and financial independence has led the new generations of Brit-Asian women in the UK, using alcohol as a means to project these advances and shift in social status.

However, as with any habit, it is difficult to control if it gets out of hand, and this habit of drinking alcohol, especially amongst young Brit-Asian women, is becoming noticeable. In particular, binge drinking with a difference.

The difference being that an increase in young Brit-Asian girls being drunk, is more visible on nights out during university and college term times, than at other times in the year.

The belief that Brit-Asian women do not drink or drink very little compared to their counterparts of other races in the UK is a misnomer today.

Seeing a young Brit-Asian girl, possibly in her early 20’s, very drunk, slightly conscious, lying on her back alone on the footpath, next to a pool of vomit at the front of a public Cinema entrance, is not exactly the picture that would be a respectful advert for the Brit-Asian youth and culture of today.

But sadly, this is the case and this kind of scene is becoming a norm amongst many Brit-Asian youth on a night out in a popular British city or town like Birmingham or London.

This possibly implies that these young women are drinking more during their newly found freedom of studying, working or living away from their controlled or more strict family environments. Plus, the affect of peer pressure and being part of a crowd that encourages drinking plays an influential role.

Also, it’s evident that many Brit-Asians now accept drinking as a way of life more readily now than in the past amongst both sexes. For example, Asian women are drinking at weddings and social functions openly now, which is something that was not so common say a decade ago in the UK. 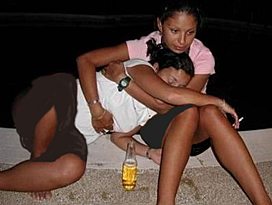 Activities of drinking alcohol in large volumes amongst Brit-Asian girls, especially on club nights, is much more prevalent.

It is a fact that such types of drinking was not the case in earlier generations of Brit-Asian women, where drinking was primarily a male habit, and women did not actively go out as much socially or in fact were not allowed out by their families, in order to protect respect and cultural differences.

It is argued by those Brit-Asians that do drink that they cannot have a good time socially without drinking but is the objective here to have a good time where you are in control of your actions or to completely submit to a time of high alcohol consumption with no limits, leading to complete loss of self-control, consciousness and respect for your own body?

The latter seems to be on the increase. Many young Brit-Asian girls have admitted that they have been so drunk that they did not know what they did, where they went, how they got home the night before. In some cases, they have admitted to having had sex in this state without fully being in control of where and with whom. 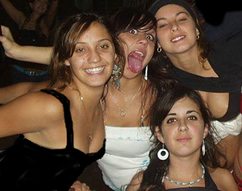 A generation gap amongst Brit-Asian women is developing with changes in social habits that reflect the Brit-Asian way of life for them in the UK today.

There are still many Brit-Asian women that do not drink and agree with the notion that you need to drink to enjoy yourself but they are no longer the majority they once were.

Newer and younger generations of Brit-Asians do not share the same views, values or opinions.

Not that such changes in social habits are not the same or even more progressed in other countries such as the US, Canada and even in some parts of India too.

However, the changes in the UK seem to show a melancholic loss of identity of the cultures once brought from India, Pakistan and Bangladesh by earlier generations, now being replaced by the modern ways of Brit-Asian life and introducing trends like Brit-Asian girls drinking themselves onto footpaths – something that was never envisaged in the past.

Nazhat is an ambitious 'Desi' woman with interests in news and lifestyle. As a writer with a determined journalistic flair, she firmly believes in the motto "an investment in knowledge pays the best interest," by Benjamin Franklin.
ID Card for UK unveiled
Buddhist Kathina Ceremony