Is Bodybuilding a new Obsession for Women?

Our generation is becoming more and more gym obsessed. DESIblitz asks whether women choosing bodybuilding shows our generation’s vanity or is an admirable motivation.

"No one knows more about their bodies and what they put into it than bodybuilders do.”

Muscle-building is more commonly associated with males (“do you even lift, bro?”) It’s also actually more difficult for women to build muscle mass due to their body structure.

But lately, many female bodybuilders are hitting the gym to complete hardcore workouts. So why do they do it? Is it self-obsession? Or should it be viewed as dedication to self-improvement?

Fitness enthusiast Amrit Pnaiser visits the gym 5 times a week and has a strict diet regime:

“Originally I enjoyed doing weights just because I wanted to look and feel good. Then I started seeing results and it made me want to work harder.

“You get a great buzz from it and feel pumped after a session. Eventually I want to compete, so now I take it a lot more seriously.”

Worryingly, recent statistics reveal 64 per cent of adults in the UK are now overweight or obese. Heading to the gym is wise simply to keep fit, and keeping active helps prevent health problems such as heart-related diseases and obesity. 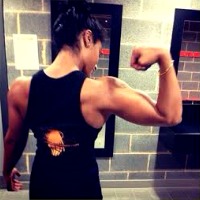 The sport of bodybuilding has many health benefits, including keeping joints strong and flexible and decreasing the risk of developing coronary heart disease.

Amrit has a very positive view of women who frequently workout: “I think Jodie Marsh has worked really hard to be known for something other than posing with her clothes off. It takes a lot of dedication to reach that level and I respect any woman who can show that kind of commitment.”

Women’s genetic set-ups mean that reducing body fat is important for muscles to become apparent. Genetically, men are designed to carry more muscle, so women who dedicate themselves to hitting the gym should arguably be respected.

Stereotypically, women are expected to be skinny and weak, so bulked-up ladies go against everything engrained into us by society.

Maxwell Kalu founded Mr University, a competition showcasing some of the UK’s most athletic bodybuilding students.

He explains that females all over the country inquired about getting involved with the Women’s Bikini and Athletic category: “When most people think of bodybuilding, the first thing that springs to mind is huge men and bulging biceps. 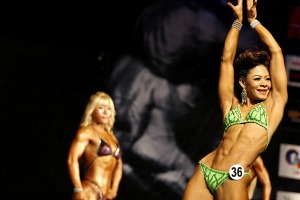 “[But] female bodybuilding is empowering as it shows that women can be strong and fit whilst retaining their femininity.

“It challenges ideas that women must be waif-like to be considered ‘attractive’ as well as promote healthy living and lifestyle choices.”

As for whether or not it would be vain to focus on bodybuilding, he said: “No one should be considered ‘self-obsessive and vain’ for taking care of their body, after all it’s not like you can trade it in for a new one at any point!”

“You need to train hard and eat clean. Squats and deadlifts are particular popular, along with walking lunges.”

It is often recommended to follow detailed workout plans, because without them there is a high failure rate. 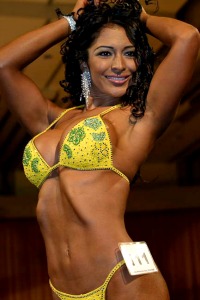 Some might argue spending so much time on one’s appearance is self-obsessive. With our Internet-crazed generation comes the trend of uploading ‘selfies’ of muscle developments, and some may argue that this is self-indulgent.

Gym-lover Kayla Maryon says: “It might be vain, but no one knows more about their bodies and what they put into it more than bodybuilders do.

“There’ll always be haters. But top athletes can inspire others and if they can do that through social media, that’s a good thing.”

Avid gym-goer Neillian Maclachlan believes it’s a mixture of both vanity and dedication: “It depends on the goal. Some people are focused on strength and the gaining from it. Then others are focused on the aesthetics.

“Either way, female bodybuilding should be admired. It takes a lot of determination and discipline.”

It seems the future of bodybuilding is bulking up. BodyPower Expo, a global fitness brand, expanded to India and South Africa this year after the success of its UK equivalent. BodyPower India was held in Mumbai in March this year, aiding the growth of the Asian fitness market.

These global developments provide female bodybuilders from all over with the means to showcase their muscular bodies.

Whatever their motivations may be, it is clear that there is a growing platform for these feisty flexing females.

Grace is a first class Media and Communications graduate who is passionate about top quality journalism. She loves reading, writing and being creative. She believes: ‘You are confined only by the walls you build yourself.'
10 Tips to Control your Anger
Homemade Desi Face Masks for Beautiful Skin