Athiya Shetty tied the knot with cricketer KL Rahul in a low-key ceremony at her father Suniel Shetty’s farmhouse in Khandala.

"I am officially now a father-in-law"

It is reported that it was a low-key ceremony but a star-studded one.

The likes of Krishna Shroff, Anshula Kapoor and Ishaan Sharma were among the guests. Their cars were spotted arriving at the venue.

Athiya and KL Rahul have been together for some time now and do not shy away from sharing each other’s pictures on social media.

But they remained quiet about their wedding.

As a result, there were only rumours and media reports about the wedding.

In pictures shared on social media, Athiya looked elegant in an intricately detailed ensemble. It was a serene soft pink Anamika Khanna lehenga.

Her look was accessorised with extravagant jewellery. 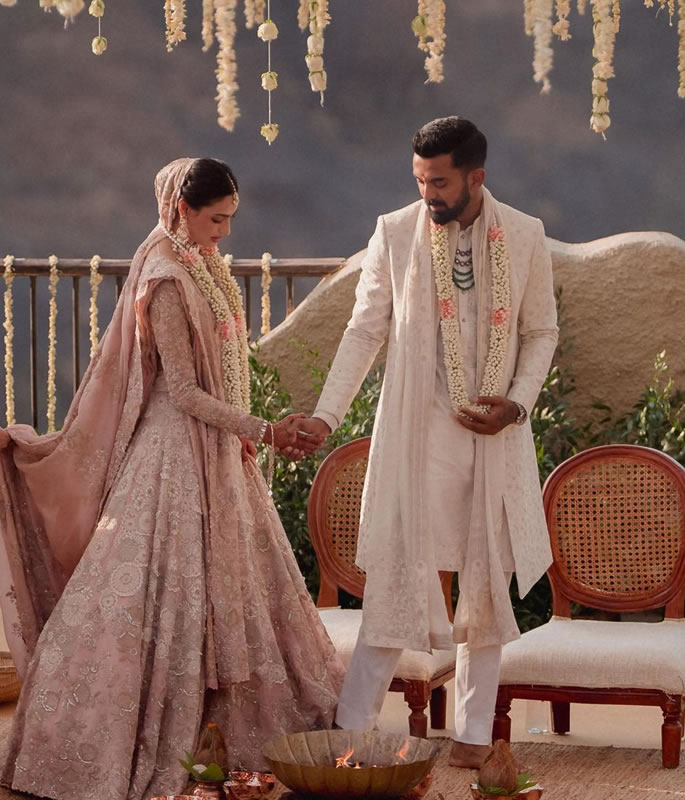 “In your light, I learn how to love.”

The couple then wrote:

“Today, with our most loved ones, we got married in the home that’s given us immense joy and serenity.

“With a heart full of gratitude and love, we seek your blessings on this journey of togetherness.” 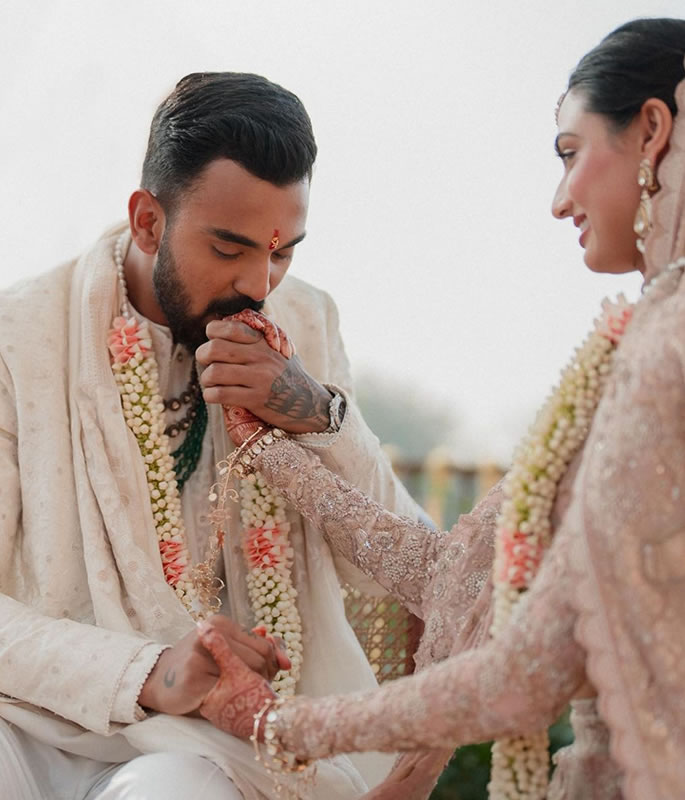 Suniel Shetty confirmed that his daughter had officially tied the knot.

Speaking to paparazzi outside the venue, he said:

“Finally, even pheras are done now, the wedding has been performed, I am officially now a father-in-law and it was a small ceremony with very close relatives but it was beautiful.” 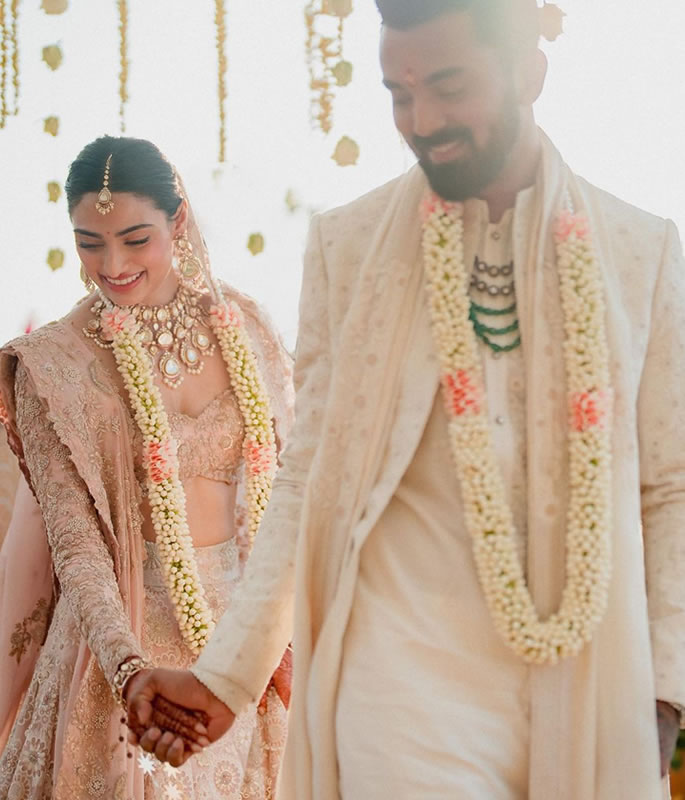 “KL Rahul was always like a brother to me. I am so glad he is part of the family now.”

After confirming the marriage, Suniel was asked about the much-anticipated wedding reception, he said it will happen after the IPL, which KL Rahul is a part of with the Lucknow Super Giants. 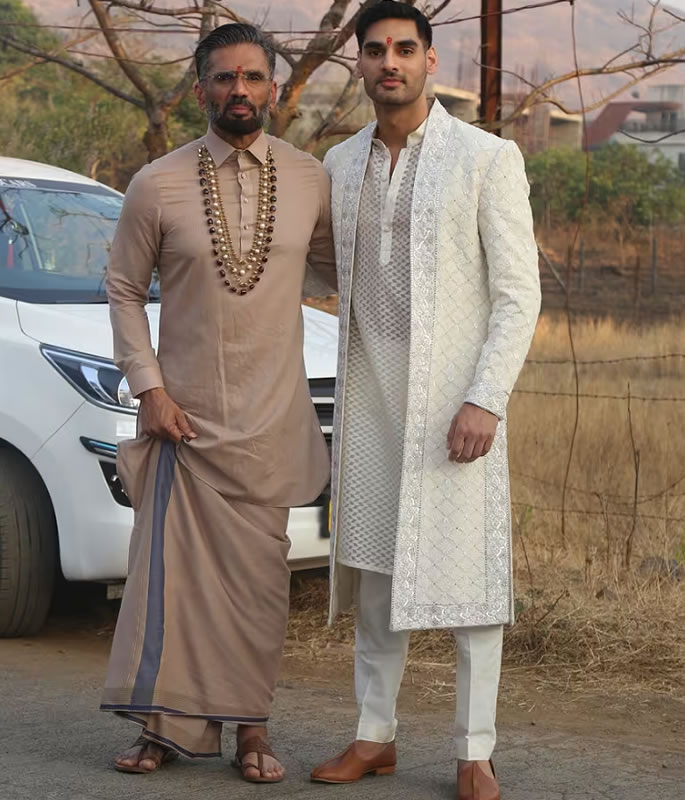 The father and son duo had been outside the venue, greeting the paparazzi and presenting them with sweets, whilst also updating them about the proceedings.

Suniel dressed in a traditional kurta-dhoti and sandals. Ahan wore an ivory-coloured sherwani.

On Twitter, Ajay Devgn congratulated the newlyweds. He wrote:

“Congratulations to my dear friends Suniel and Mana Shetty for their daughter Athiya’s marriage to KL Rahul.

“Here’s wishing the young couple a blissful married life. And, Anna, here’s a special shout-out to you on this auspicious occasion.” 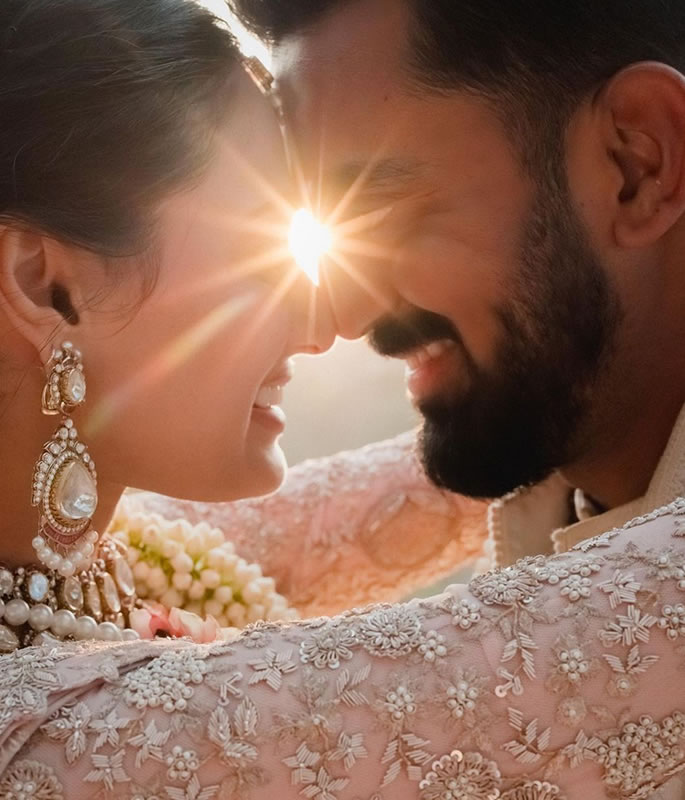 Other celebrities congratulated the couple.

“Congratulations Athiya! So so happy for you both! Lots of love!!”

The couple had enjoyed pre-wedding festivities and videos taken from outside the Khandala farmhouse showed guests having a good time.

At the Sangeet night, guests were spotted dancing to hits such as ‘Besharam Rang’ and Amitabh Bachchan’s ‘Jumma Chumma De De’.

Arjun Kapoor’s sister Anshula was also spotted taking over the dance floor at the pre-wedding festivity.

Dhiren is a journalism graduate with a passion for gaming, watching films and sports. He also enjoys cooking from time to time. His motto is to “Live life one day at a time.”
Fahadh Faasil to be part of Lokesh Kanagaraj’s ‘Thalapathy 67’?
Ranbir Kapoor grabs eyeballs in ‘Tu Jhoothi Main Makkaar’ trailer