With Salman Khan getting ready to launch Bigg Boss 12 in Goa, it looks like he still seemed ‘upset’ with Priyanka Chopra at the press conference.

"Now, she should get married and have children."

Everyone knows Salman Khan likes to have his digs when he can. One such dig seems to have been targeted at Priyanka Chopra for walking out of the film Bharat at the Bigg Boss 12 press conference on September 4, 2018, in Goa.

So, is Bhai still ‘upset’ with PeeCee?

If rumours are anything to go by, Salman is still quite upset with Priyanka’s exit from Bharat and does not want to work with her again.

Khan’s sense of humour intertwined with that hint of sarcasm can get the sniggers and attention in a room. When he was asked about the Bharat saga at the conference, he could not but hint his distaste in the way Priyanka conducted herself, saying:

“It was sweet of her to tell us five days before the shoot that she couldn’t do Bharat. I’m glad Katrina is part of the film. She was Atul’s [Agnihotri, producer] first choice. But Priyanka called Ali and said she wanted to do Bharat, so we considered her.”

When he was asked if he was upset with her, he replied, of course in his usual way:

“No, I am not. Bilkul bhi nahi. She got engaged, I am really happy for her. My sister Arpita even went for the engagement. We are all very happy. Now, she should get married and have children. But, woh baat buri lagi ki woh picture nahi huyi but I hope that happens in future.”

Priyanka’s reason for her exit from Bharat was not just the engagement, she also allegedly signed up for her Hollywood film, Cowboy Ninja Viking, co-starring with Chri Pratt (Guardian Of The Galaxy).

According to ANI, Salman expressed his dismay as to why Priyanka did not reveal her signing of the Hollywood film, saying:

“I am really happy for her. Had we known earlier that she has signed a big film in Hollywood, we would have never stopped her.

“My shooting had begun. We got to know about her decision of leaving the film at the end moment – just 10 days before her schedule.

“Priyanka had come home and I told her, ‘It’s okay if you don’t want to do it’.

“At that time, we were given some other reason. Whatever may be the reason – be it marriage or picture or her not being willing to work in India or with me, it’s her reason and we are really supportive about her doing good work.

“If she does not want to work with Salman Khan, it’s okay; she’s working with a big hero in Hollywood.”

The cynicism in Salman’s responses does say a lot about he feels about the whole ‘Bharat-gate’ affair with Priyanka. It certainly looks he is not happy in the way the whole matter was communicated to him and his team. 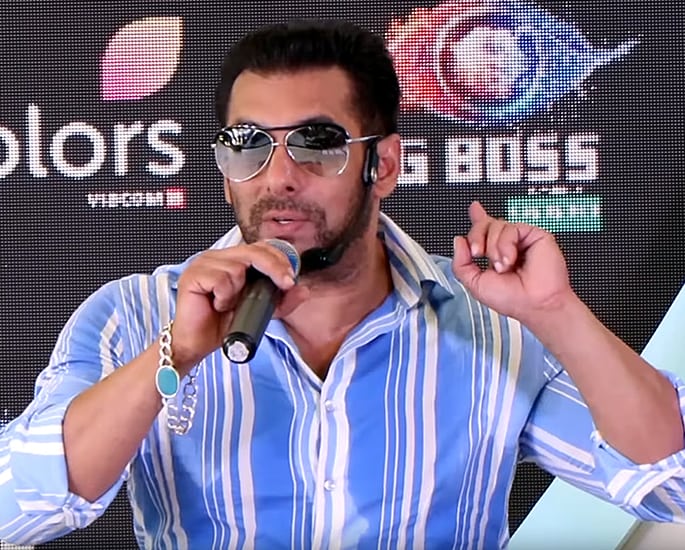 “When I signed Big Boss, the one being considered to sign Big Boss was Shahrukh Khan.”

“So, Shahrukh was the original choice of Bigg Boss.

“But he was shooting and he had shoulder ka jo injury tha us ka pehle. He was shooting somewhere in Prague so he couldn’t make it down to do the show.”

At the press conference, he was also asked would he doing a film with Sanjay Leela Bhansali and Khan replied:

“I am doing a film with Sanjay. I haven’t heard the script yet. I have heard the line of it. I have been trying to call him but he isn’t attending my calls. Just tell him to call me up.”

Then the golden question about him getting married came up and cunningly he replied:

“They ask me lame questions like, ‘When are you getting married? ‘Bigg Boss is one of the biggest properties on television with which I have had the longest relationship in my life so far. Maybe I should get married to Bigg Boss, there are various advantages to it.”

Reports say that as the front-man for Bigg Boss 12, Salman Khan is adament that Priyanka will not be coming on the show for any promotional means either.

Amit enjoys creative challenges and uses writing as a tool for revelation. He has major interest in news, current affairs, trends and cinema. He likes the quote: "Nothing in fine print is ever good news."
It’s a Baby Boy! For Shahid Kapoor and Mira Rajput
Aishwarya Rai Bachchan given first Meryl Streep Award for Excellence