Actress Ankita Lokhande has tied the knot with Vicky Jain in a lavish ceremony in Mumbai, sharing pictures of the wedding.

Since festivities began on December 11, 2021, their wedding has been talked about a lot.

The couple got married on December 14, 2021, in front of family members and friends.

Some of the guests included Amruta Khanvilkar, Srishty Rode and Aparna Dixit. 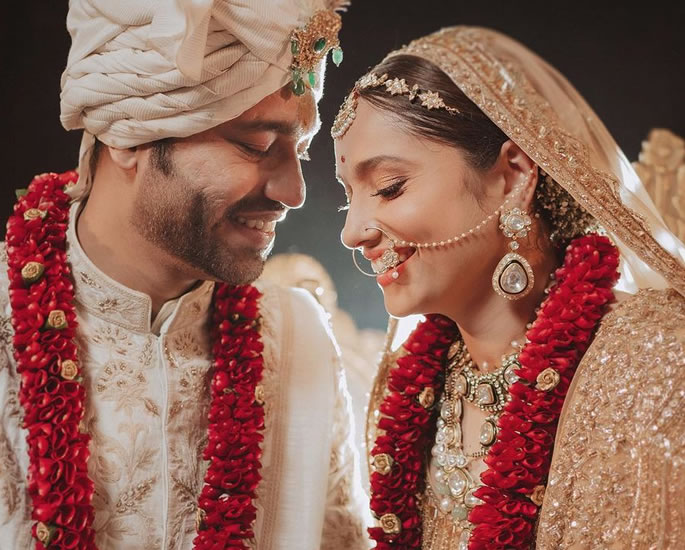 The couple opted for coordinated outfits designed by Manish Malhotra.

Ankita stunned in a golden lehenga. The golden sheer veil attached gave a princess feel to her whole look.

Meanwhile, her new husband wore a white sherwani that was adorned with intricate gold details.

“Right from her Pavitra Rishta days to her relationship with Sushant Singh Rajput and then him passing away, and she going through many trying times, to finally meeting her soulmate, Vicky Jain, I have seen what a strong woman Ankita has been.

“And during this time, Vicky stood by her like a rock and he has helped her face these tough times.

“Of course, Ankita is an amazing woman but Vicky also helped her sail through some of her toughest times.

“So, seeing them get married was a very happy moment for me.

“Vicky and Ankita are made for each other and I am happy that she is now looking forward to new, happy beginnings.”

Amruta went on to say that due to the pandemic, the number of guests had to be cut down but nevertheless, it was a special wedding. 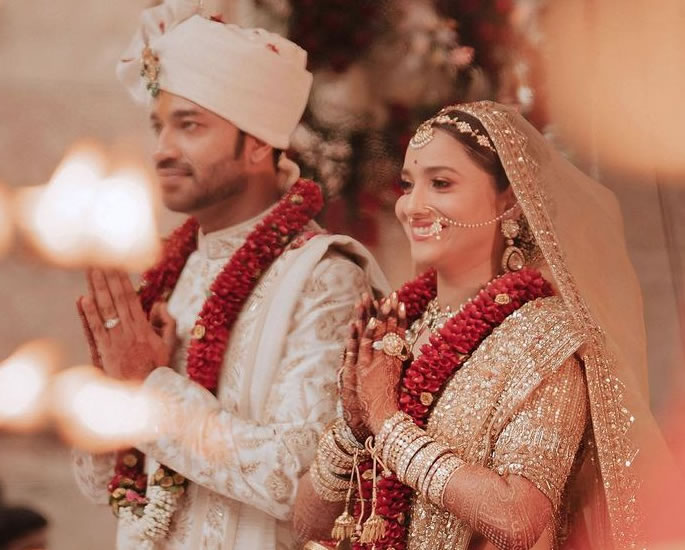 Ankita and Vicky were in a relationship for three years before getting married.

On December 14, 2021, Ankita posted photos from her sangeet ceremony.

In the photos, she and Vicky are seen wearing outfits from Shantanu and Nikhil.

In the caption, Ankita wrote:

“Once in a while right in the middle of ordinary life love gives us a fairytale.”

Following the intimate wedding, the couple hosted a reception for their guests.

While Ankita Lokhande has transitioned to films, she is best known for her performance in the series Pavitra Rishta, which also starred her late ex-boyfriend Sushant Singh Rajput.

Dhiren is a journalism graduate with a passion for gaming, watching films and sports. He also enjoys cooking from time to time. His motto is to “Live life one day at a time.”
Minal Khan and Ahsan Mohsin Ikram criticised for PDA Video
Alia Bhatt Recreates Iconic ‘Poo’ Scene from K3G