Randeep Hooda, the star of Sarbjit (2016), has received the utmost recognition from the legendary Amitabh Bachchan in a special handwritten note.

“The Mrs. is the bravest of them all. So proud!”

Sarbjit is the only Bollywood film on every one’s lips right now. Even the legendary Amitabh Bachchan could not help but praise its lead actor with a special gesture.

Big B expresses his admiration for Randeep Hooda’s performance in the film in a handwritten note.

Randeep, who plays the wrongfully convicted Sarbjit Singh in the biopic, tweets with excitement in response to the letter which reads:

“I had always admired your talent, but after watching you in ‘Sarabjit’ last night I could not resist writing to you and expressing my immense admiration for your work in the film.

“May you continue to prosper and may you give us many more occasions to applaud you and your tremendous talent.”

The cast of Sarbjit attended the film premiere in Mumbai on May 18, 2016, after a successful screening at the 69th Cannes Film Festival.

Speaking about being tasked with translating the painful story of Sarbjit Singh on the big screen, Randeep said: “The nervousness part was before I did it and while I was doing it. Now it’s over, it’s not in my hands so it is an excitement to share it with people.

“It is challenging and that’s the way it should be. If it is not challenging then you should not do it.”

The Bachchan family made a special appearance at the star-studded event to support Aishwarya Rai, who essays the role of Sarbjit Singh’s sister, Dalbir Kaur.

Together with her dashing husband Abhishek and parents-in-laws Amitabh and Jaya, they posed for a happy family photo on the red carpet.

At the premiere, Ash said: “It’s a very sincere piece of cinema straight from the heart. Most important for us as a team is that this is being made very sensitively, keeping in mind the sensitivity of the subject and the members of [Sarbjit Singh’s family] most importantly.

“And the fact that Dalbir Kaur and her family feels validated, that’s been by far the most precious aspect, that was something that meant a lot to me personally and to the whole team.”

The beautiful actress added: “As a team we always make movies to bring it to the audience. So we’re glad that today onwards it’s open to all of you to view and we hope that you appreciate the efforts of the team.” 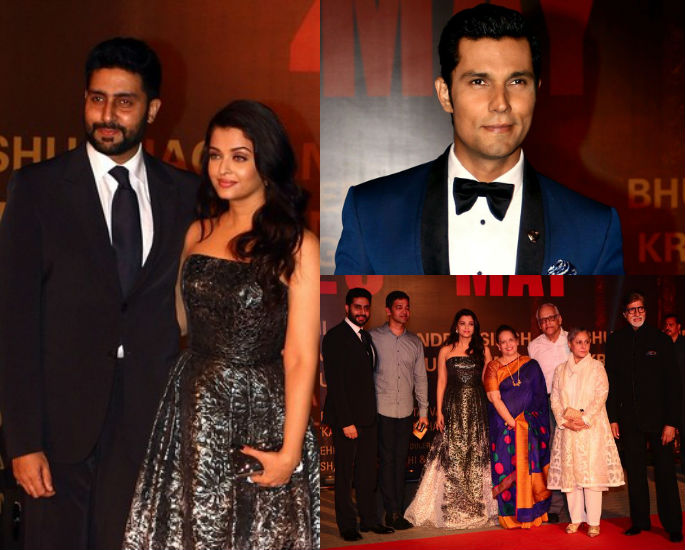 Abhishek has been showing immense support for Ash and her film on Twitter, saying: “It’s immensely brave of any actor to perform with such honesty and fearlessness and the Mrs. is the bravest of them all. So proud!”

He truly has her back through thick and thin. When the Internet pokes fun at Ash’s purple lips at one of her red carpet looks at Cannes 2016, he responded: “I think she looked fantastic … She always does.” Isn’t he the sweetest?