Amir Khan shared a bathroom selfie, flaunting his physique. However, netizens were not impressed and trolled the boxer.

Amir Khan was trolled for flaunting his abs in a bathroom selfie.

The Bolton boxer decided to tell his fans about how much he is “getting back in shape”, showing off the results of his time spent in the gym.

However, some netizens were less than complimentary.

On Facebook, Amir stood in front of a bathroom mirror in his underwear, showing off his biceps and abs.

He captioned the post: “Slowly getting back in shape.

“Last few weeks been smashing the gym hard in Dubai.”

Many of his fans praised the boxer’s physique.

One person said: “Great. Is there any upcoming fight?”

Another wrote: “Need more of your hardwork champ because I wanna see you in ring once again.”

A third posted: “Looking good. When do you think you will be fighting next Amir?” 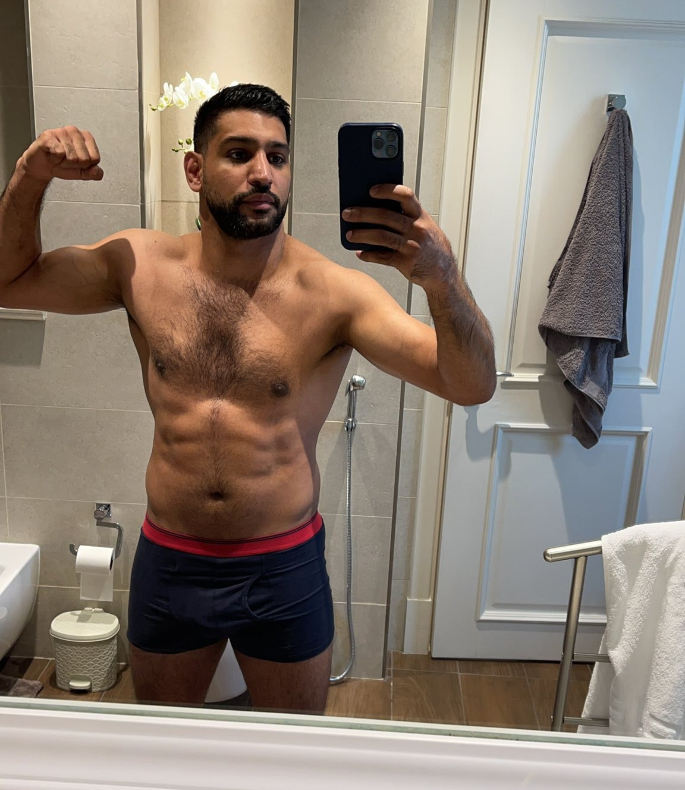 However, not everyone was impressed by Amir’s appearance, with several critical comments being directed at the former world champion.

One person commented: “If I didn’t know you and you said you were a world champion boxer, posing at me with that melted ice cream look, I’d never believe you.”

Another said: “Dad bod coming bro… Time to gracefully retire. You’ve done your bit. Don’t want you to get hurt.”

One user warned the boxer, writing:

“Not looking too good, don’t think about a return, you will get sparked out.”

One netizen said that Amir is “not looking fit” after getting married, while another said:

In April 2021, Amir Khan said he was preparing to agree to a long-awaited battle with British rival Kell Brook, saying “now is the right time to make that fight happen”.

Despite the talks, nothing has come to fruition as of yet.

The trolling aimed at Amir Khan comes just days after his wife Faryal Makhdoom was accused of editing her pictures.

She had shared a picture with her son Muhammad on a swing in Dubai.

Faryal wore a tight black sleeveless top but her waist looked very distorted, with grey blurred lines along the outline.

Her trousers also looked crumpled and not in line with her hips and waist in the picture.

Faryal’s followers were quick to point out the fail, taking to the comments section and accusing her of editing her pictures in order to make her waist look slimmer.

One person said: “Very nice pic… But we can clearly see the photoshop.”

Another wrote: “God bless the family photos but this is the worst Photoshop I’ve ever seen.”

Dhiren is a journalism graduate with a passion for gaming, watching films and sports. He also enjoys cooking from time to time. His motto is to “Live life one day at a time.”
Pakistani Citizens not Married at 18 face Fines?
Indian Man Stones Brother to Death over House Repairs