The influential Nobel laureate Amartya Sen is a rare combination of culture, philosophy and economics. DESIblitz takes a look at his life and contribution to the world.

Amartya Sen has received over 90 honorary doctorates from universities around the globe and his books have been translated into more than thirty languages.

He is a charismatic thinker who bridges history, culture, literature, economics, and politics.

Time magazine listed him in their ‘100 most influential persons in the world’ in 2010.

Serving as the Master of Oxford and Cambridge Universities from 1998 to 2004, he is the first ever Asian and the first Indian scholar to head an Oxbridge college.

DESIblitz looks into the life of this charismatic personality in detail. 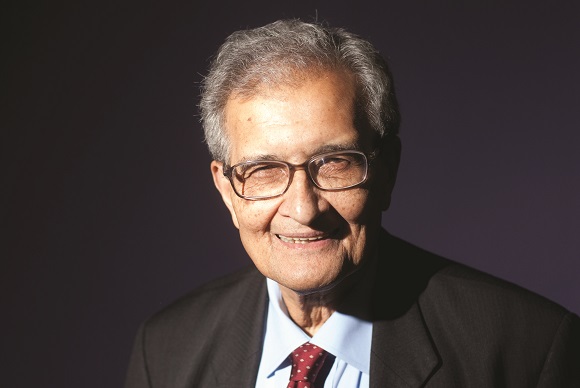 At the moment, Sen is still active and contributing in his efforts to create a fair and free society.

Coming from a pedagogic lineage, Sen’s father was a lecturer in Chemistry at Dhaka University. Amartya proudly recalls the name ‘Amartya’ being suggested by Tagore himself to Sen’s mother.

Initially, Sen was unsure about which educational pursuits to follow:

“My planned field of study varied a good deal in my younger years, and between the ages of three and seventeen, I seriously flirted, in turn, with Sanskrit, mathematics, and physics, before settling for the eccentric charms of economics,” Sen says in his biography.

When the economists were focusing on the accumulation of wealth and development, Sen was thinking differently.

Deeply concerned about the poor, Sen was constantly absorbed in the problems of the underprivileged and the destitute people of society.

Amartya Kumar Sen was awarded the 1998 Nobel Prize in Economic Sciences acclaiming his inputs to welfare economics and social choice theory, and for his focus on the problems of society’s poorest people. 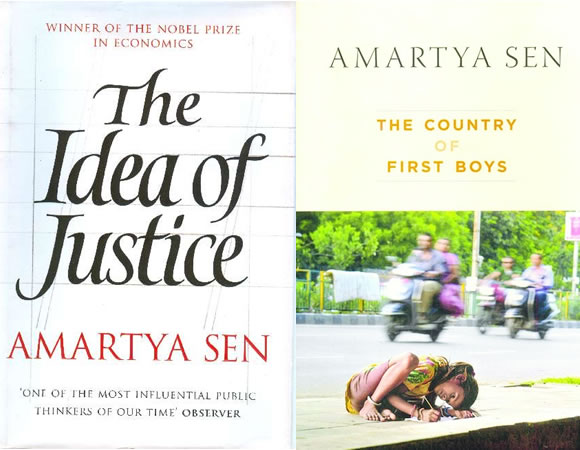 “This was a co-educational school, with many progressive features. The emphasis was on fostering curiosity rather than competitive excellence … any kind of interest in examination performance and grades was severely discouraged.”

In his growing years, Amartya witnessed a terrible famine as well as horrendous communal violence in which thousands of people were buried alive.

Sen expresses his thoughts in his book The Argumentative Indian that the success of India’s democracy is in the elimination of inequalities related to class, caste, gender and community. 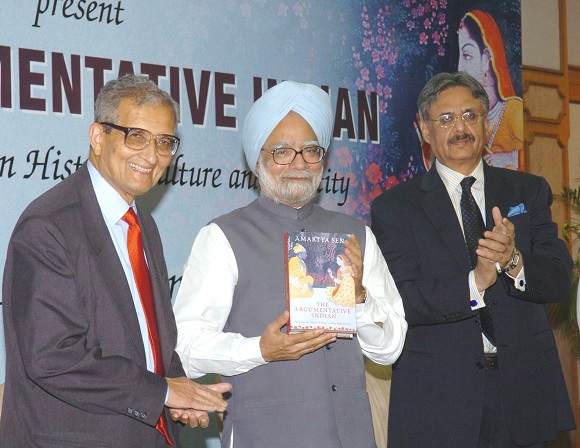 Studying at the Presidency College, Calcutta, he saw the unattended economic misery of the poor, hidden behind the classy and noble lives of the rich.

In 1953, Sen moved to Cambridge to read another degree at Trinity College.

At the age of 23 he returned to India for 2 years to do his research.

He was then appointed as a professor to the new department of economics of Jadavpur University.

Amartya Sen’s marriage with Nabaneetha Dev, a celebrated Bengali author, failed in 1971. They had 2 children, Antara, a journalist and Nandana, a Bollywood actress.

In 1978 he remarried Italian economist Eva Colorni with whom he had Indrani a journalist and Kabir, a musician. 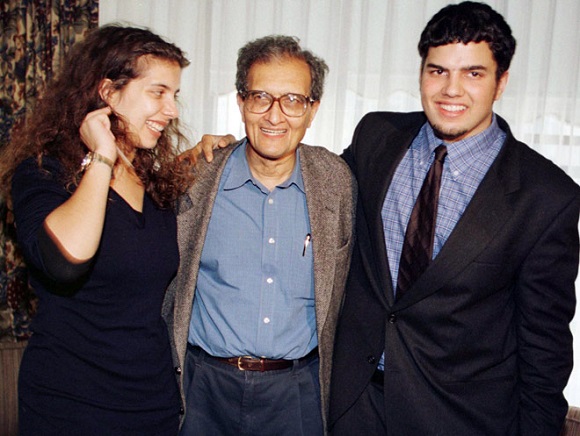 Following Eva Colorni’s sudden death from cancer Sen moved to USA with his children, where he found himself lecturing at Harvard University.

Amartya has always been emphasising that women’s intervention and freedom are among the essential means for enhancing development:

“The way in which economic progress is judged in the contemporary world tends to give a much larger role to men’s needs and demands despite all the progress that has been achieved in enhancing the voices of women in the last half-century.”

He further adds: “There is an overwhelming need to pay attention to the needs of girls and women.”

Amartya Sen’s latest book, The Country of First Boys was published in 2015.

It is a collection of essays which reflects his philosophical voyage through social justice to illiteracy, alienation to globalization, and freedom to exploitation.

Amartya said: “Poverty is not just a lack of money; it is not having the capability to realize one’s full potential as a human being.”

DESIblitz is proud to present this living legend and hopes his life will inspire many.

Images courtesy of Ministry of Information and Broadcasting India/Photodivision, University of Glasgow and Reuters