Aishwariya and Rajnikanth in ROBOT

Hollywood style special effects and animation, jam-packed action and colourful songs; starring Rajnikanth and Aishwariya Rai Bachchan, and music by AR Rahman, are the formula for ‘ROBOT’ (Enthiran) – the most expensive Bollywood movie to hit the screens.

ROBOT is reported to be the biggest budget Indian movie ever to be made. The film is also called called Enthiran and ROBO which are the Tamil versions of the film. With a budget of over Rs. 162 crore, it is speculated to become Asia’s biggest movie too.

The film stars one of the biggest actors from South India, Rajnikanth, in the lead role, alongside, Aishwariya Rai Bachchan in the lead female role. The lead villan role is played by Danny Denzongpa. Directed by S Shankar and produced by Kalanidhi Maran, the music for the film is scored by Oscar winning A R Rahman.

Other actresses considered for the lead female role were Priyanka Chopra, Deepika Padukone, Asin Thottumkal, Trisha Krishnan, Shriya Saran and Priyamani but it was Aishwariya who was selected. And her signing fee was significant too for the film: Rs 6 crore (approx £850,000), making her the highest paid actress in India for one movie. 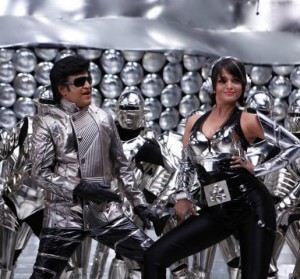 Aishwariya has found the experience of working with Shankar once again very enriching, her previous Bollywood movie with him was ‘Jeans.’ And as for working with Rajnikanth she said: “Rajni sahib. A legend! He’s just an incredible artist, so dedicated, so committed. I mean however much we wax lyrical [about him] it won’t be enough.”

Aishwariya’s role in the film is of a more typical heroine and said: “It’s what the audience would like to see a heroine do. In that sense in my career I have not done that very often. I’ve done maximum character driven roles in my films. Whereas in this movie obviously, Sanna the name of my character is very intrinsic to the story line.”

The film has some of the most Hollywood like blockbuster special effects and animation. Stan Winston Studios best known for the Avatar, Shutter Island, Terminator series, the Jurassic Park series, Aliens, the Predator series and Iron Man delivered the animatronics for Enthiran. The stunning special effects were created by Industrial Light & Magic who have huge credits to their name including the Avatar, Harry Potter, Star Trek, Wall-E, Iron Man, Mission Impossible, Chronicles of Narnia and The Last Airbender. 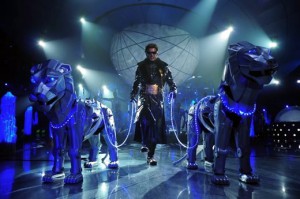 The science fiction story of the film is about the struggle of a scientist Dr. Vaseegaran (Rajnikanth) to control an android robot called Chitti created by him (also played by Rajnikanth). The robot is given the ability to understand and communicate human emotions. This leads to the robot meeting a beautiful women, Sanna (Aishwariya Rai Bachchan), and developing feelings and love towards her. The robot writes romantic poems expressing his emotions using its artificial intelligence. The scientist too has love for her and this results in conflict between robot and its creator over the woman.

Being aware of the extraordinary artificial intelligence of the robot, the villains try to get hold of the robot. The scientist then fights back to prevent the robot from falling prey to the enemies. The story then revolves around the battle between the scientist and the evil forces.

Here is an official trailer for ROBOT (Enthiran): 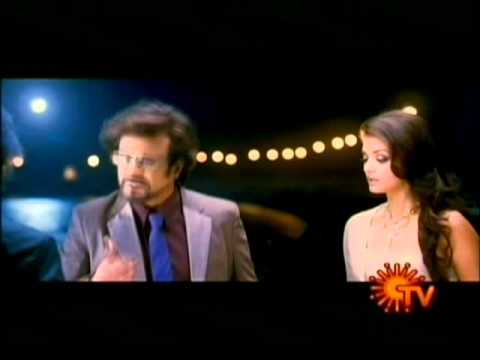 Robot has taken over two years to make is distributed by Sun Pictures. Hansraj Saxena, CEO of Sun Pictures said: 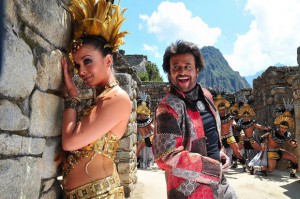 Shankar and the cinematographer R. Rathnavelu went on a world tour for location-hunt, visiting Vienna, Rio de Janerio and Hanoi to find suitable locations. The historic site of the Machu Picchu in Peru, was selected for a song sequence featuring Rajinikanth and Aishwarya Rai Bachchan under the choreography of Raju Sundaram and Claudia Bruckmann.

The film sold out especially in South India, for its opening on 1st October 2010 with many advance bookings. Over thirty theatres in Chennai were sold out in the week prior to the release. Fans of Rajnikanth the biggest star from the South are going crazy about the movie and it is expected to be a huge blockbuster.

Critics have given it a thumbs up and with the crew being as prolific as the cast, it’s obvious that the big budgets are giving Bollywood the chance to make films utilising world-wide skills with the passion and aim to please audiences even more.

Amit enjoys creative challenges and uses writing as a tool for revelation. He has major interest in news, current affairs, trends and cinema. He likes the quote: "Nothing in fine print is ever good news."
Bollywood Gay film faces Censors
John Abraham gets Jail sentence