Dr Priyamvada Gopal, an academic at the University of Cambridge, received a wave of abuse for her “White Lives Don’t Matter” tweet.

Dr Priyamvada Gopal, aged 51, an academic at the University of Cambridge was hit by a wave of abusive messages and death threats for tweeting “White Lives Don’t Matter”.

She then added: “Abolish whiteness.”

However, the controversial message, which has since been deleted by Twitter, was met with a barrage of outrage, with many people responding both publicly and privately with death threats and racist abuse.

She said that she has received more than 50 abusive emails and hundreds of tweets.

One of the most disturbing messages directed at the academic included a man sending her a picture of a noose and writing: 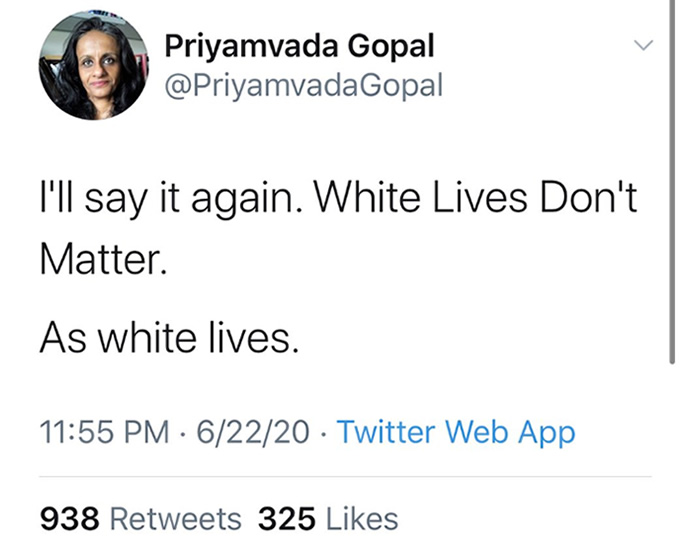 A petition titled ‘Fire Cambridge Professor for Racism’ was also launched, demanding that Dr Gopal be fired by the university.

The organiser of the petition, Renee Myers, who is from the US, said:

“Allowing Ms Gopal to continue lecturing at Cambridge sets a precedent that this behaviour is acceptable and welcome amongst teaching faculty. Racism cannot be tolerated.”

The University of Cambridge defended the academic. They released a statement:

“The University defends the right of its academics to express their own lawful opinions, which others might find controversial.

“[It] deplores in the strongest terms abuse and personal attacks. These attacks are totally unacceptable and must cease.”

Dr Gopal said: “It’s not the first time. I’m routinely targeted, but this is the biggest campaign, mainly coming from the USA.

“It’s like watching a huge amount of sewerage flowing past you.

“You realise how much hate there is out there and how much work needs to be done.”

On June 23, 2020, Dr Gopal announced that the university promoted her to a full Professorship.

She added: “I would also like to make clear I stand by my tweets, now deleted by Twitter, not me.

“They were very clearly speaking to a structure and ideology, not about people.

“My Tweet said whiteness is not special, not a criterion for making lives matter. I stand by that.”

I would also like to make clear I stand by my tweets, now deleted by Twitter, not me. They were very clearly speaking to a structure and ideology, not about people.

She clarified her tweets to CambridgeshireLive:

“I was saying whiteness isn’t the reason lives should matter. Lives do matter, but not because they are white. I say the same thing about my own community.

“When I talk about abolishing whiteness, I talk about political practices and ideologies. Systems of oppression, whether white or brown, should be abolished.

“It’s about abolishing a race hierarchy where whites are at the top.”

A spokesperson said: “After receiving multiple complaints in relation to the content, officers have reviewed it and concluded no offence has been committed.

“We have also received several reports of malicious communications targeting the author of the Tweet.

“This content is now also being reviewed by officers.”

Dhiren is a journalism graduate with a passion for gaming, watching films and sports. He also enjoys cooking from time to time. His motto is to “Live life one day at a time.”
Shiv Chand talks RAF Career, Diversity & Innovation
TikTok star Siya Kakkar commits Suicide after ‘threats’