Destination weddings are common amongst our favourite celebrities. DESIblitz explores the most expensive and grand Bollywood weddings.

“Don’t we look great together?”

If there’s one event that defines extravagance and grandeur in the country, it’s the great Indian celebrity wedding.

With each passing year, the list of lavish weddings seems to get bigger and better.

From expensive wedding invites, and unusual destinations to an elaborate culinary spread, these couples and their families spent big bucks to tie the knot.

Weddings are a time to celebrate love with your closest friends and relatives.

When you’re a celebrity, you tend to have the resources to do so in quite a bit more style and grandeur than the rest of us.

Some Bollywood celebrities, in particular, have spent gobs of cash on their special day.

Our superstar couples certainly leave no stone unturned to make their holy union a memorable one.

This list of the 8 most expensive Bollywood celebrity weddings is sure to leave you in awe. 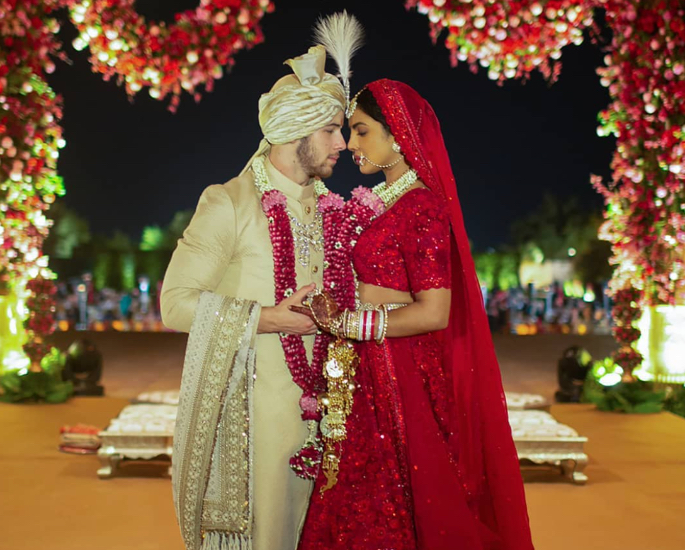 Nick Jonas slid into Priyanka Chopra’s Twitter DMs in 2016, but they didn’t begin dating until a year and a half later.

He proposed in Crete with a $200,000 Tiffany cushion-cut diamond ring and shut down the entire London store to pick it out.

Priyanka Chopra and Nick Jonas got married in Umaid Bhawan Palace in Jodhpur, Rajasthan in 2018.

The celebrations were a three-day affair, with a Hindu wedding ceremony and a Christian one.

Priyanka and Nick spent a whopping $4,61,000 on the hotel itself, which included rooms for the guests and the venues.

Add the cost of the designer outfits, jewellery and food, and you will know that this was an extravagant wedding.

Her wedding saree, designed by Tarun Tahiliani, was estimated at Rs 50 lakh, while her engagement ring reportedly cost Rs 3 crore.

Raj Kundra had proposed to Shilpa Shetty in Paris.

Talking to Shibani Dandekar on The Love Laugh Live Show, Shilpa talked about how Raj took her by surprise with the proposal:

“I was in Paris for the Karl Lagerfeld show. Raj flew down and proposed to me.

“He had booked out the whole banqueting hall at the Grand.”

Raj planned a fancy meal for Shilpa and proposed with a diamond ring during the last course.

Shilpa added: “It was a five-carat diamond ring and I might sound really materialistic but I was like, ‘It’s just five carats.’ I took a while to say yes because I was like, ‘This is not what I imagined.’

“No, no, I am just joking. Because I took two seconds more, he was like, ‘The wedding ring will be bigger.’ So I said yes there and then.” 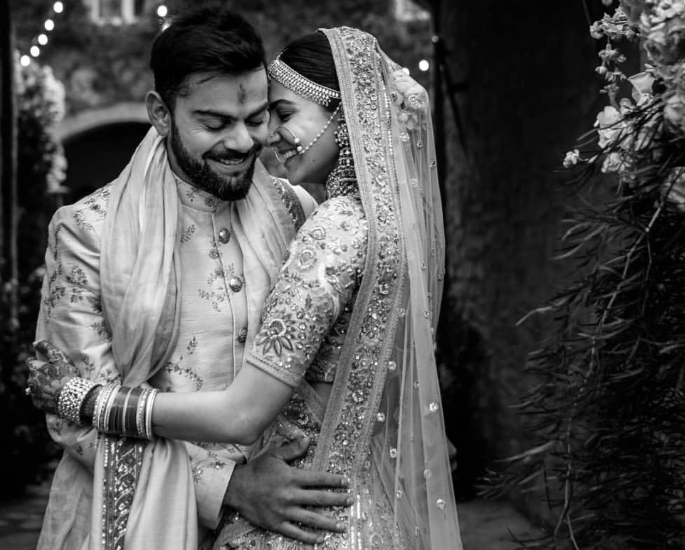 Virat met Anushka for the first time in 2013 on the sets of a television commercial shoot for Clear, the shampoo brand.

In an interview with Bensinger, he said: “When I met her for the first time, I cracked a joke.”

He also recalled that he was very nervous and didn’t know what else to do at that moment: “I was just there, standing, being all nervous and jittery.”

The ad shoot went on for three days and during this shoot, both Virat and Anushka realised that they hail from very similar backgrounds.

They both come from, in Virat’s words, “middle-class families, made it in our respective careers, worked hard, got to a certain stage.”

Virat Kohli and Anushka Sharma got married in 2017 at the second-costliest resort in the world in Tuscany, Italy. At Borgo Finocchieto, the hotel rooms cost Rs 13.5 lakh per night.

Anushka and Virat’s private wedding was dreamy. The bride and the groom chose to wear Sabyasachi outfits and looked perfect together.

Aishwarya Rai tied the knot with Abhishek Bachchan on April 20, 2007.

It was after the premiere of the film, Guru, in Toronto, when Abhishek Bachchan had proposed to Aishwarya Rai in New York, and she had immediately accepted his proposal.

Abhishek had shared the details with Oprah Winfrey in the couple’s first interview post their wedding.

He had said: “I was filming in New York for a movie. And, I used to stand on the balcony of my hotel room and wish that, ‘One day, wouldn’t it be nice if I was together with her, married.’

“So, I took her to the very same balcony, and I asked her to marry me.”

Their wedding was nothing short of a royal event at the Bachchan bungalow, Prateeksha, in Mumbai.

Aishwarya Rai wore a beautiful saree with red and gold zari designs by Neeta Lulla. She was also decked up in traditional gold jewellery. 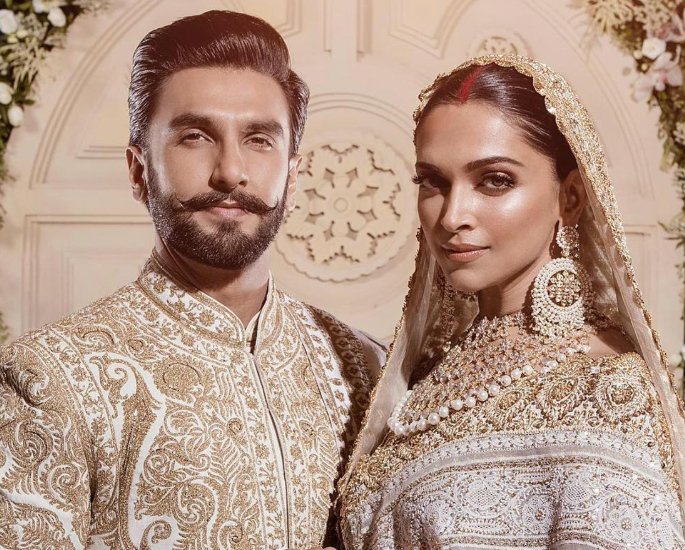 Bollywood’s power couple Deepika Padukone and Ranveer Singh got married in Italy in 2018.

All the wedding festivities took place at Villa Del Balbianello in Lake Como.

Reportedly, each night at the resort costs more than Rs 24 lakh. There were at least 5 days of festivities and customized everything, from footwear to handkerchiefs.

It was on the sets of director Sanjay Leela Bhansali’s film Ram Leela that Deepika and Ranveer are rumoured to have begun dating.

Ranveer Singh, in a post celebrating the film’s fourth anniversary, wrote alongside their picture, “Don’t we look great together?”

The two would go on to star in two more Bhansali films, cementing their reputation as one of Bollywood’s hottest on-screen couples.

After having worked together on the sets of LOC Kargil and Omkara, Saif and Kareena fell in love while shooting for Tashan in 2008.

In 2019, Kareena shared in her Humans Of Bombay post: “I’d met him before, but while we were filming Tashan, something changed.

“I wore my heart on my sleeve! He was so charming; I fell for him hook, line & sinker.”

The 2012 wedding had several venues which included the VVIP Bungalow No.31 on Aurangzeb Road, New Delhi as well as the exquisite Pataudi House, owned by Saif and his family.

The gold jewellery Kareena Kapoor wore on her wedding day itself reportedly amounted to Rs. 4 crores while her lehenga cost Rs. 50 lakhs. 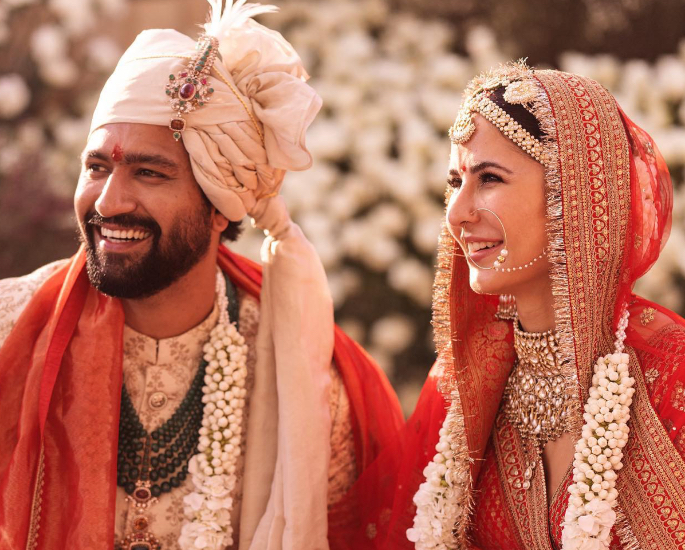 Koffee with Karan has given us some serious entertainment and let us on to many celebrity secrets, but the show has also served as a budding ground for romance.

It was on the show when Karan Johar asked Katrina about who she would look good with that she replied, “Vicky Kaushal”.

According to several reports, this is when things started to heat up between the two.

When Karan pointed that out to Vicky in another episode, the Bollywood actor pretended to faint on hearing Katrina’s answer.

Though the two kept their relationship strictly under wraps, news of their wedding was leaked months before and the paparazzi followed them around and captured everything leading up to their wedding in Rajasthan. 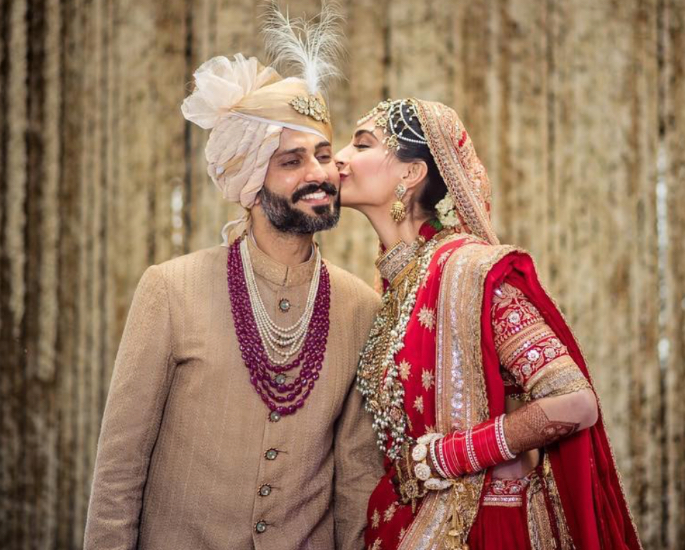 The duo dated for more than two years before they were officially married to each other.

Sonam Kapoor and Anand Ahuja made their first public appearance together when Akshay Kumar threw a special bash in honour of Will Smith at his home.

This was the first time her then-boyfriend caught the attention of the public, with a photo of the pair going viral on social media.

After three years of dating, the couple tied the knot in a three-day celebration, with VIPs and many other celebrities from around the world attending the lavish affair.

The couple had an intimate ceremony followed by a grand reception in Mumbai.

All the stunning wedding pictures and videos from their ceremony circulated on social media, showcasing all the gorgeous outfits the bride was adorned in.

Even international designers such as Ralph and Russo made their way to the wedding, along with other globally recognised Indian designers who enjoyed the celebrations in the heart of Mumbai.

If you’ve ever witnessed and been a part of an Indian wedding, you’ll know exactly why they are referred to as ‘big fat Indian weddings’.

With functions spread over a few days and surrounded by plenty of guests, an Indian wedding cannot be complete without a show.

With lavish international extravaganzas becoming the trend, there is never a dearth of wealth at a celebrity wedding.

Ravinder is a Journalism BA graduate. She has a strong passion for all things fashion, beauty, and lifestyle. She also likes to watch films, read books and travel.
How to recreate Ananya Panday’s bronzed Metallic Lids
Hira Mani shares her Weight Loss Secrets