In the sixth episode of Desi Rascals, Shreekant and Purnima showed the young sweethearts what true love is all about, as they celebrated their 44th Wedding Anniversary.

“I saw you, and thought, ‘That’s the right one.’ And you looked beautiful.”

Love and romance have been at the heart of the inaugural season of Desi Rascals.

The series started with Praks and Shreena’s wedding, and we have seen the Shahdashians succeed in their quest for love.

But there are those who believe that true love involves a lifetime of commitment.

In the sixth episode, the Patels and Varas come together to pay homage to Shreekant and Purnima, on their 44th Wedding Anniversary.

Rita takes the plunge with Owais 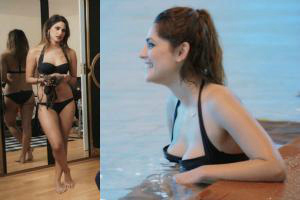 Rita is taking her new personal training regime seriously, and is properly equipped for her swimming lessons with a new bikini.

She is understandably nervous about going into the pool, after a bad experience at school.

Owais and Rita resume the flirting games. But when Owais jokingly splashes water in her face, the memories flood back, and she leaves the pool crying.

From then on though, Owais is a true chivalrous gent and apologises. In her attempts to explain her fears, Rita asks: “What are you scared of?” Owais immediately replies: “Rejection.”

She asks: “But that doesn’t make you cry though?” He asserts: “It does. I go home and cry every time I get rejected.”

Rita forgives him with a high-five. So they are still [thumbs-up] ‘friends’! 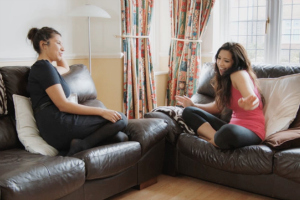 Each half of MoJo share about their lovelife with their sibling.

At the Shahdashians, Nat walks in on Jo practicing her Bollywood dance moves. Ridiculing Mo’s ‘shaved belly’, Nat asks: “Did you ask him what else he got waxed?”

Over at Pure Muscles, Anj attempts to coach Mo about the correct etiquette when meeting Desi parents.

But as they role-play a mock conversation, Mo’s chances do not look promising. 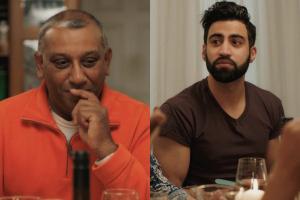 As Celia prepares dinner, she asks Manoj: “You’re not going to grill him, are you?”

Manoj replies: “It might be uncomfortable for him to start off with.”

Mo nervously approaches the Shahdashian’s front door. Manoj is keen to make him sweat and delays opening the door.

When he eventually does, Mo greets Manoj with: “Yes, Dad.” But Manoj will not let Mo have an easy night: “I really thought that he would have his beard shaved off and wore a suit.”

Poor Moses asks: “Shall I go home and get changed?” Whatever Mo says, he is going to have a hard time impressing Manoj.

Manoj decides to raise the topic of religion, and asks: “What would your mum think about Jo?”

Mo says: “At the moment, she has no complaints about Jo. [Turns to Jo] I got your back. Team MoJo!”

Sunjay still in the doghouse with Charlotte 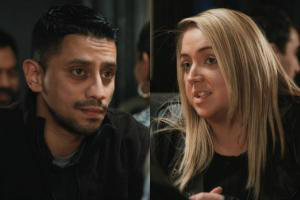 In previous episodes, we heard that Sunjay and Charlotte were on a date. But Sunjay went off to speak to some Desi female friends of his, leaving her on her own for half an hour.

One of these friends irked Charlotte, when she asked Sunjay: “Don’t you like Asian girls?”

Now Sunjay wants to resolve the issue. So  he makes a trip to the florists, which sets him back £30! Charlotte likes the gesture but is not convinced that Sunjay understands what he has done wrong.

Sunjay attempts to prove he is a good boyfriend but sounds like he is trying to win an award for Desi Rascals Gaff of the Week.

When Charlotte asks what they are going to do to move forward, Sunjay says: “I was going to take you bowling.”

At the garage later, Charlotte brings Sunjay a cuppa. He says: “Lovely cup of tea, darling. You make it just like an Indian wife.”

Jo tries one of Mo’s waffles 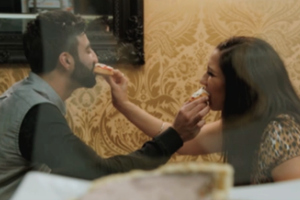 Mo says: “I was like, I haven’t had an interview for two years because I own my own gym.”

When Mo asks Jo about the relationship, she says: “I am obviously happy. I get excited when I know I’m going to see you.”

They feed each other a bite of waffle, and Mo says:

“I’m melting, just like this waffle. I just can’t stop looking into your eyes.”

On a similar wavelength, Jo says: “You’re like my MoJo.” 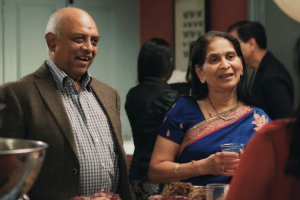 Shreekant and Purnima think that everyone has forgotten about their big day.

But little do they know that daughters Anu and Shreena are planning a surprise party for them.

As they reminisce about their wedding day, Purnima asks: “What did you think of me when you saw me?”

Shreekant responds: “I saw you, and thought, ‘That’s the right one.’ And you looked beautiful.”

The elder Patels think that Shreena is taking them for a quiet night at the pub. So they are delighted with the surprise.

Sisters Shreena and Anu complete an emotional and moving night with a speech and a toast, before unveiling video footage from Shreekant and Purnima’s wedding day.

Desi Rascals producer, Gurinder Chadha tweeted: “My daughter says this bit is so so nice mummy.”

DESIblitz would like to congratulate Shreekant and Purnima, and their families, on this auspicious occasion.

With Valentine’s Day next week, what games will Cupid play? Find out in the next episode of Desi Rascals on Tuesday 10th February 2015 on Sky Living.

Shamitabh stars Amitabh Bachchan and Dhanush
Aishwarya to star opposite a Khan?