R Balki’s Shamitabh stars Amitabh Bachchan, Dhanush and Akshara Haasan. DESIblitz finds out more about the film from the director and actors themselves.

"The question is, who is the true star? The voice or the actor it belongs to?”

The director-lead actor duo have previously enjoyed success with Cheeni Kum (2007) and Paa (2009).

DESIblitz caught up with R Balki and the cast at a London press conference to promote Shamitabh.

The plot revolves around a film-crazy boy (Dhanush) from a small village, who becomes a superstar, with the help of an alcoholic voice actor (Amitabh Bachchan) and his deep baritone voice.

Shamitabh is a story of two different people who become one for a cause, and then allow their egos to get the better of them.

Akshara Haasan, the daughter of actor Kamal Haasan, makes her film debut. She plays the role of an assistant director, who brings this team together, and is then caught in this clash of egos. 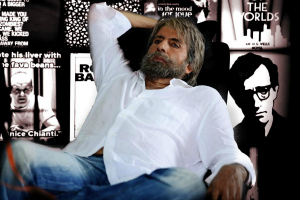 R Balki created the story as a 70th birthday present for the veteran actor, Amitabh.

Balki says: “This film is a homage to a voice that over the past 40 years has become instantly recognisable over the world.

“The question is, who is the true star? The voice or the actor it belongs to?”

The huge role that voice plays in film is central to Shamitabh. On the experience of being dubbed by Amitabh, Dhanush says: “It was tough because you are using someone else’s voice, especially because it is a voice as distinctive as that of Amitabh sir’s.

“It was also very tough to hear his voice but not try to perform like him. The film was first dubbed by him. Then I acted to him. And then it was re-dubbed to match the facial expressions I made in each scene,” he adds.

Amitabh admits that the process was very similar to playback: “When a singer sings a song, they render it as a singer. But actors need to match the same mood and emotion that the singer brings to the song and use appropriate expressions.”

While Amitabh’s majestic voice is celebrated in Shamitabh, interestingly, he was once rejected by All-India Radio: “I had just got out of university and I wasn’t finding any job. So someone suggested I should be a newsreader on radio. 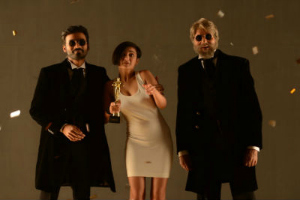 “I applied for the job at All-India Radio but was rejected there. But that’s fine. Maybe my voice was not suitable. There were some very eminent commentators at that time.”

We asked Amitabh, as someone who has been in the industry for 46 years, how things had changed over this time period.

He said: “People’s thinking has changed and I have been fortunate to work with each generation of the last few decades.

“The audience have also become more receptive to see new content and more new things. However, I feel that because of the way we conduct ourselves has changed, our films have followed suit.”

“This would usually take up half of the time. However, now it just happens straight away, and the speed of communication is so rapid. This is reflected in the films and our numerous avenues of entertainment,” he explains.

Tamil film star, Dhanush is a recent addition to Hindi cinema. Speaking about why he wanted to be part of this film, he tells us: “Mr Balki had a new story to tell and he has great craft in what he does with a very different mind.

“He comes with these weird but beautiful concepts and he is a taskmaster. He knows what he wants and he takes the best out of his actors.”

Dhanush came into the mainstream Hindi limelight when his song, ‘Why This Kolaveri Di’, became a viral hit and the most viewed Indian song on YouTube. 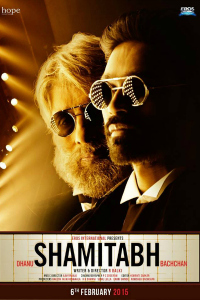 So will there be a sequel? “I can’t plan what is coming my way and I am going to take it as it comes. There will not be another ‘Kolaveri di’ as that just happened.”

Akshara previously rejected several film offers, including Mani Ratnam’s Kadal, before deciding to make her much anticipated debut in Shamitabh.

She tells DESIblitz: “The reason I didn’t do films earlier is because I wasn’t ready to be an actor. I wanted to explore other fields and at that time, I was mainly focussing on my dance.

“Just shortly before Mr Balki had talked to me about this project, I had done a play that switched on my desire to be an actor.”

Both Dhanush and Akshara consider working with Amitabh Bachchan to be a great honour.

Dhanush says: “It was a great opportunity for me to learn from the best. Just by watching him perform live, it taught us a lot.”

Akshara who called the shooting ‘a beautiful experience’, says: “It’s made me a better person and helped me discover what kind of actor I can be. I hope that in the future, I get a chance to work with them again.” 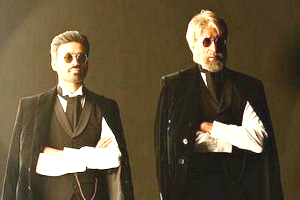 The soundtrack for Shamitabh is legendary music composer Illaiyaraja’s 999th album, and he does not let us down with this score.

The album has been received positively by critics and has ranked high in the iTunes Downloads charts.

Film critics are predicting commercial success for Shamitabh. Many are putting this down to the R Balki and Amitabh Bachchan combo, which has already produced the goods in films such as Cheeni Kum and Paa.

Like R Balki’s previous films, critics have been quick to praise the refreshing originality of the film. Unique and innovative, Shamitabh releases in theatres from Friday 6th February, 2015.

Sonika is a full-time medical student, Bollywood enthusiast and lover of life. Her passions are dancing, travelling, radio presenting, writing, fashion and socialising! “Life isn’t measured by the number of breaths taken but by moments that take our breath away.”
Love is in the Air for the Desi Rascals
44th Wedding Anniversary Surprise in Desi Rascals