Three men have been jailed after police found £3.25 million worth of cannabis hidden inside crates of frozen meat.

“All three of you played a vital role in that enterprise."

Three men have been jailed after they concealed £3.25 million worth of cannabis in crates of frozen meat inside a Lancashire warehouse.

On August 26, 2020, an officer was conducting enquiries in Commercial Street, Oswaldtwistle, when he was drawn to a warehouse that smelt of “death”.

The smell was coming from one unit named AtoZ meats.

Despite repeatedly knocking on the door and calling the telephone number, the officer was unable to gain access, prompting him to call for backup.

According to police, the drugs had an estimated street value of £3.25 million.

Investigations found the unit was being rented by the men and used as a cover to take delivery of large amounts of cannabis.

David Povall, prosecuting, said: “A workstation had been set up within the body of the unit.

“Down the centre was a pallet wall. On one side was a stack of boxes containing mostly frozen cows’ feet which were being unpacked with the meat being hurled into bins.

“Underneath the feet were heat-sealed packets of skunk cannabis and cannabis resin.

“Those were being taken out. There was then a section of the pallet wall which had been set-up as a cleaning station.

“It appeared that the packets of drugs which had been taken out having been mixed up with meat were then being cleaned and re-packaged.

“The officer’s arrival had interrupted the unpacking of this consignment of drugs.” 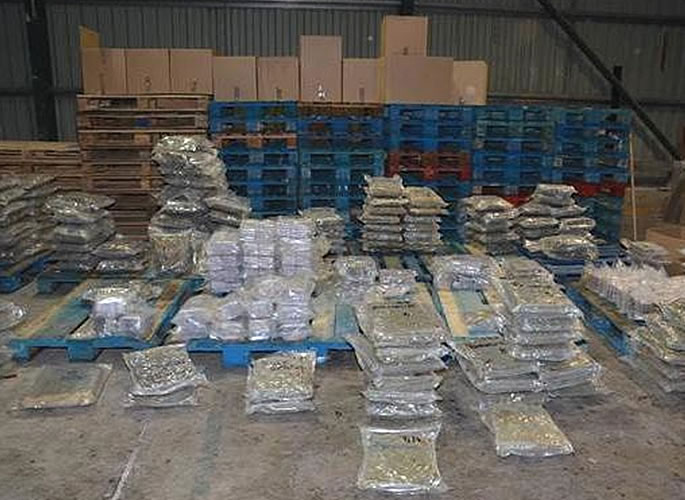 Footage recovered from the area found that earlier that morning, an HGV registered to a Spanish haulage company arrived at the unit and a number of crates were delivered.

Further examination of documents showed that there had been around eight similar deliveries to the unit from the Spanish haulage company between March 2020 and August 2020.

On November 24, 2021, the men pleaded guilty to all charges brought against him.

“You fall to be sentenced for your participation in what is a huge criminal business operation to bring into the country and distribute huge amounts of cannabis which was undoubtedly to generate huge amounts of profit for those who would receive those profits.

“All three of you played a vital role in that enterprise.

“You were not conned, forced, coerced or in any other way persuaded to do it.

Yamin Patel, aged 34, of Blackburn, was jailed for four years.

Ismail Ahmed, aged 36, of Burnley, was jailed for three years and nine months.

“These conspirators all played their individual roles in what was a sophisticated drugs operation, which saw large quantities of cannabis exported into the UK, repackaged and then sold on.

“The only thing which motivated these men was greed.”

“While not Class A drugs, the sale of cannabis leads to exactly the same type of violence, exploitation and funding of serious and organised crime.

“It causes misery in communities and leads to vulnerable people being taken advantage of.

“This was a long and complex investigation and a lot of time, hard work and tenacity went into securing these convictions.

“I am pleased that this organised criminal gang has now been disbanded and its members jailed. I would also like to thank our colleagues from the CPS.

“Lancashire Police will not tolerate illegal drugs activity of any kind and will use all the powers available to us to seek out, arrest and prosecute the offenders.”

Dhiren is a journalism graduate with a passion for gaming, watching films and sports. He also enjoys cooking from time to time. His motto is to “Live life one day at a time.”
Ex-Lovers jailed after Child Filmed being Sexually Assaulted
Indian Love Marriage results in Husband badly Beaten Up