As Saba Qamar makes waves, yet again, in her new televised series ‘Fraud’, we take a look at 10 facts you probably did not know about her.

Her performance gained her lots of new fans.

Saba Qamar, the well-known Pakistani actress is one of the most recognised faces in Pakistani showbiz and has a massive fan following in India and other countries as well.

She is known to play unconventional roles in television serials and films and is a highly-paid model as well.

She has appeared in television adverts and music videos too and it seems the world can’t get enough of her.

Saba is currently garnering applause with the televised Pakistani series Fraud that is being broadcast on ARY Digital.

With spectacular stars such as Saba Qamar, Ahsan Khan and Mikaal Zulfiqar in lead roles, the thriller drama series is generating a lot of interest.

Saba is wowing audiences with her heart-touching performance as Maya and the new series is already a hit.

So, who is Saba Qamar? If you can’t get enough of this sassy, talented, brunette beauty, read on and let us fill you in. 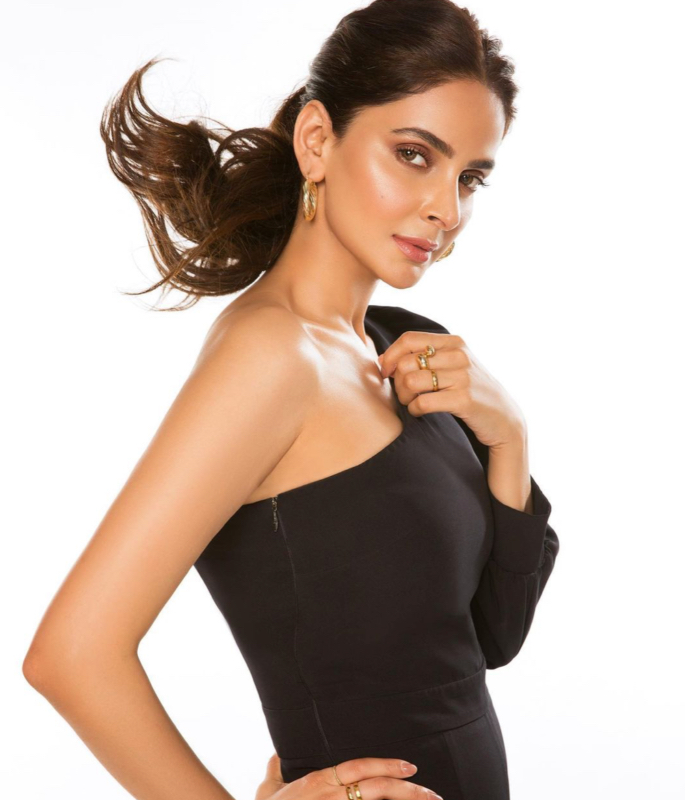 She has a tattoo on the nape of her neck depicting her name in Thai.

Saba was born on April 5, 1984, which makes her an Aries, into a Sindhi family in Hyderabad, Sindh, Pakistan.

The actress is the first person in her family to work in the entertainment industry. 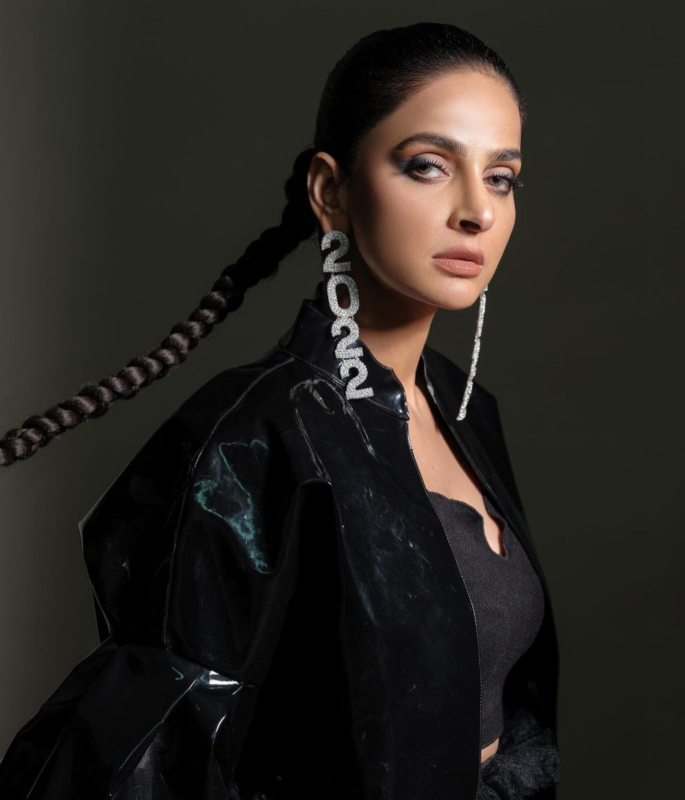 Saba Qamar lost her father at just 3 years of age.

The actress got her early education in Gujranwala and then moved to Lahore for further studies. 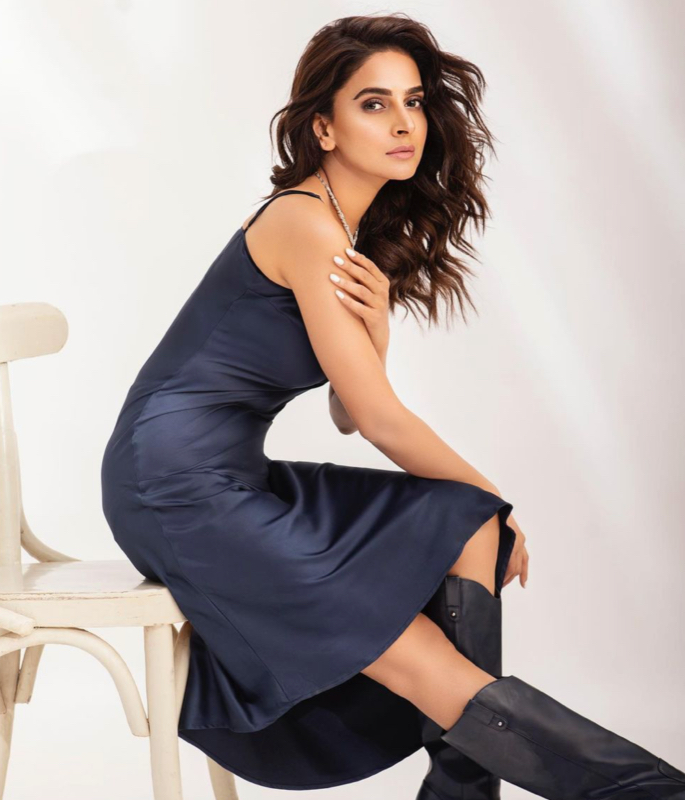 Saba made her Pakistani film debut in 2013 with the romantic drama film Aina directed by Sarmad Khoosat.

The well-known Pakistani actress made her debut in Bollywood, in Saket Chaudhary’s film Hindi Medium opposite Irrfan Khan.

Her performance gained her lots of new fans in India. 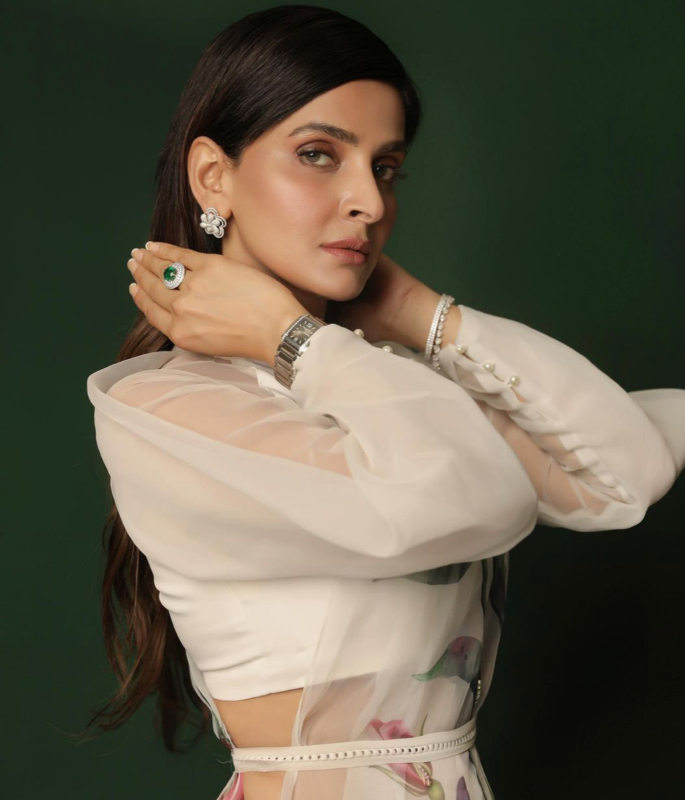 In 2012, the Government of Pakistan honoured her with ‘Tamgha-e-Imtiaz’, the fourth-highest decoration given to civilians in Pakistan based on their achievements.

In 2016, she received ‘Pride of Performance’ in recognition of her meritorious work in the fields of Arts.

Saba is the first Pakistani actress to bag a Best Actor nomination at the Filmfare Awards for Hindi Medium. 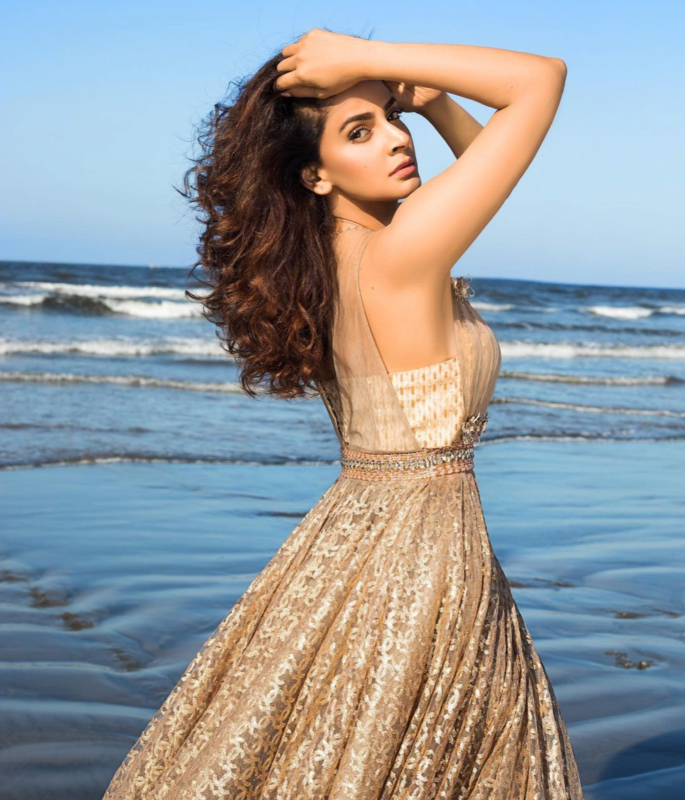 She has acted in numerous serials and films all portraying varied characters and did justice to every one of them.

In 2007, Saba also starred in ATV’s Khuda Gawah. In 2010, she showed up in an exceeding role of Suraya in Hum TV’s serial Dastaan.

Her role in the drama serial Tinkay got her a couple of awards in 2011 and increased her fan base.

Saba’s role as Saman in Maat was a well-performed negative character that audiences loved to hate in that series.

She has also hosted one of the famous Pakistan TV parody shows of all time, Hum Sab Umeed Se Hain opposite Veena, and got a lot of appreciation for it. 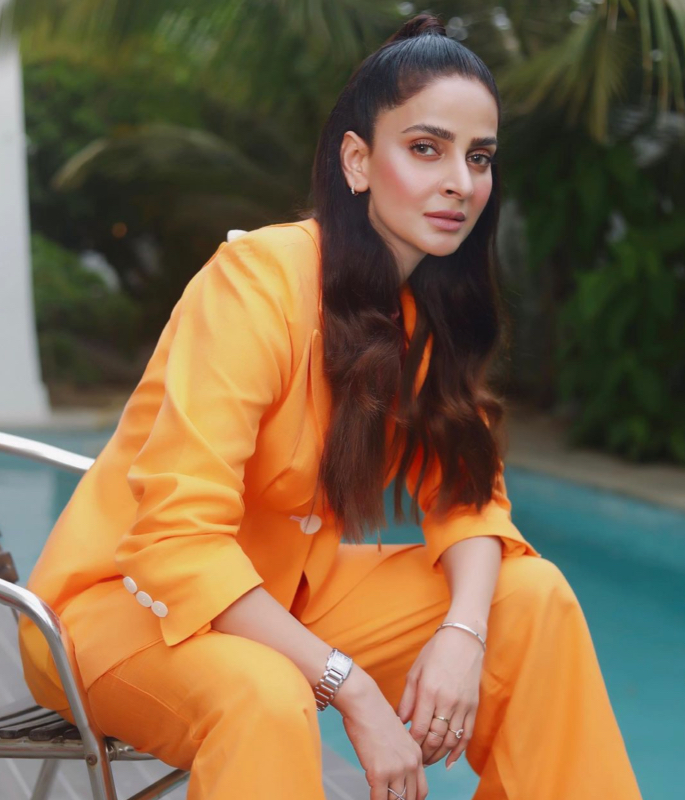 Saba has some impressive film performances under her belt.

In 2016, she acted in the Pakistani road-comedy film Lahore Se Aagey and the murder mystery 8969.

Her performance in both films was highly appreciated and she was nominated for the Lux Style Award for Best Actress for Lahore Se Aaagey.

Her other notable films have been Moomal Rano, Dil Diyan Gallan and Iss Dil Ki Essi Ki Tessi amongst others. 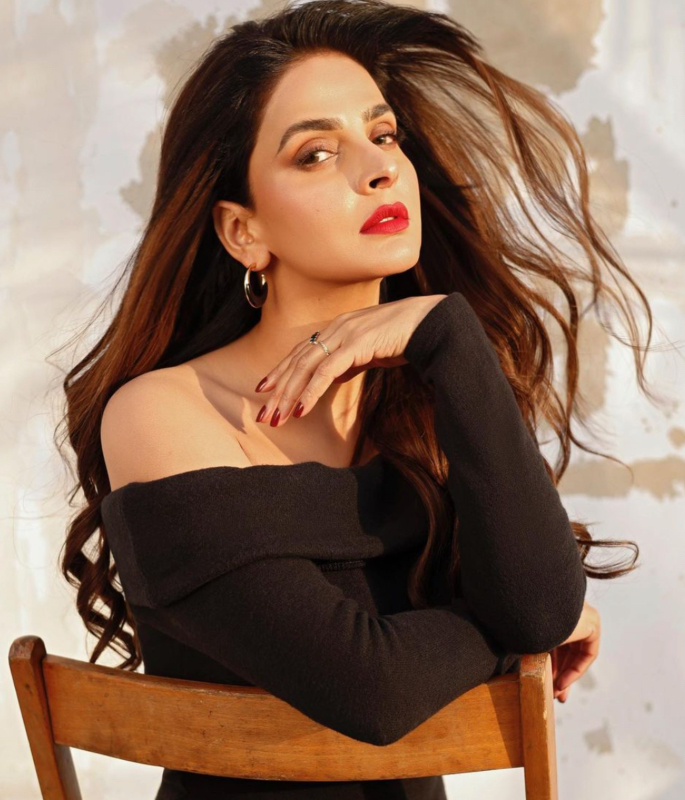 Saba also admits to being a voracious reader. Bano Qudsia and Ashfaque Ahmed are among her all-time favourite authors.

Saba Qamar favours cardio, spin classes and yoga, which she claims helped her to “relax and refresh.”

Her favourite Pakistani film is Na Maloom Afraad. Saif Ali Khan is her favourite artist and she once said she wants to portray a character which would be a female version of Khan’s character in Omkara.

Saba is also a fan of film star Saima and loves her record-breaking film, Chooriyan. 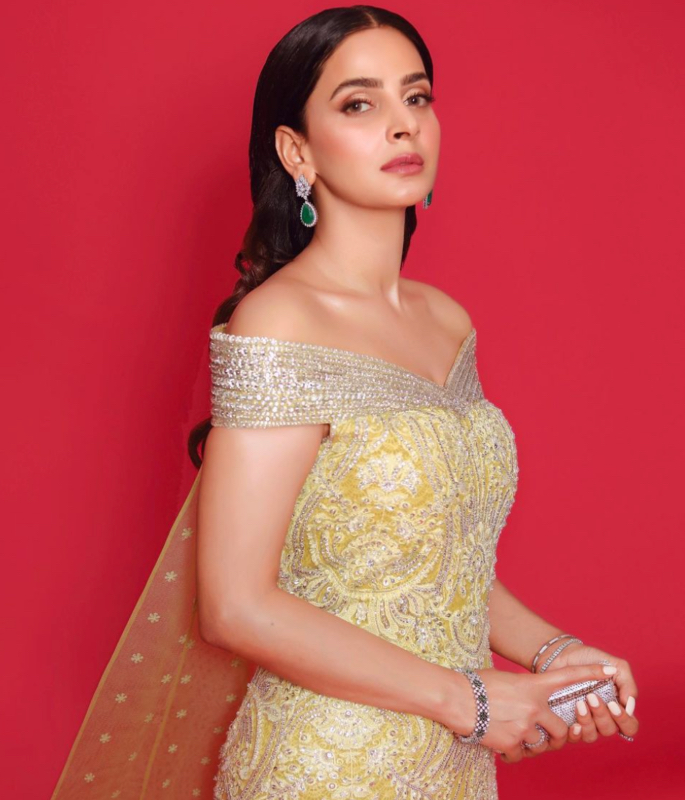 Saba opened up about her relationship with Dino, a foreign businessman with whom she was engaged for eight years before splitting up, on her YouTube channel.

She described the relationship as abusive.

Saba and Pakistani actor Hamza Ali Abbasi dated each other for a couple of years but then split up.

In 2021, Saba was set to tie the knot with Azeem Khan, a blogger and entrepreneur, but she decided to call off the wedding due to personal reasons.

A woman had accused Azeem Khan of sexual harassment a few days after he announced his engagement with Saba.

Saba later mentioned that she had never met Azeem Khan, and they were in contact only by phone.

The actress was recently gifted flowers by someone known as Shanoo and the video went viral. Fans’ interest was piqued to know that Shanoo is not a Pakistani, sparking curiosity even further.

Saba has been smiling mysteriously during interviews when asked about the speculations. Saba stated that she will tie the knot with her special someone at the end of 2022. 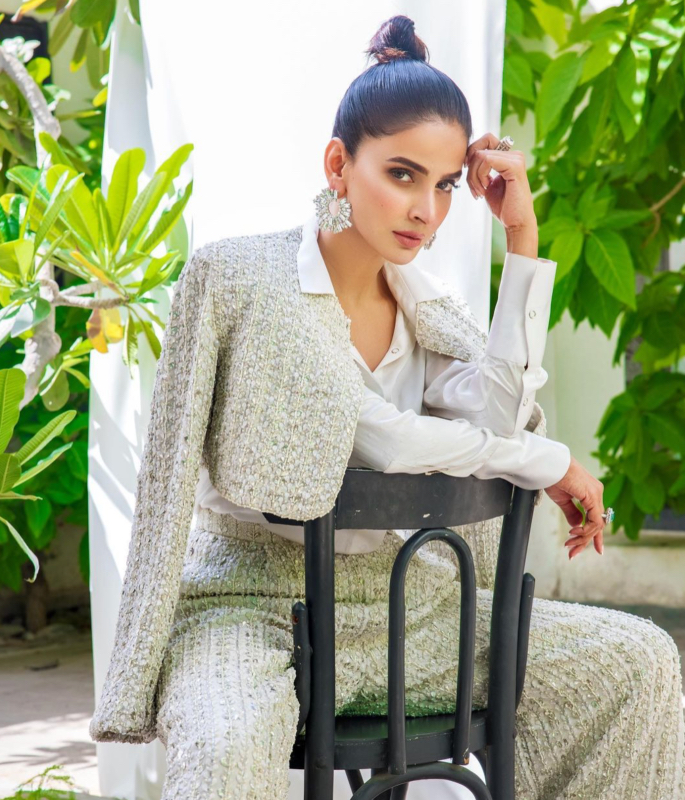 Veteran Lollywood actor Meera appeared on an episode of The Mazedaar Show where she made some revelations about her rivalry with Saba Qamar.

On being asked by a fan about her equation with Saba, Meera revealed: “Since day one, she doesn’t want me to work, she can’t even see me working.

“Management crew told me that she always b****es about me behind my back and asks producers to not cast me.”

The two leading ladies earlier worked together in the drama serial Main Sitara.

Host and actress Mathira commented on Instagram under a post covering Meera’s statements. She said: “Saba is such a beautiful soul, she would never say or do something like this!” 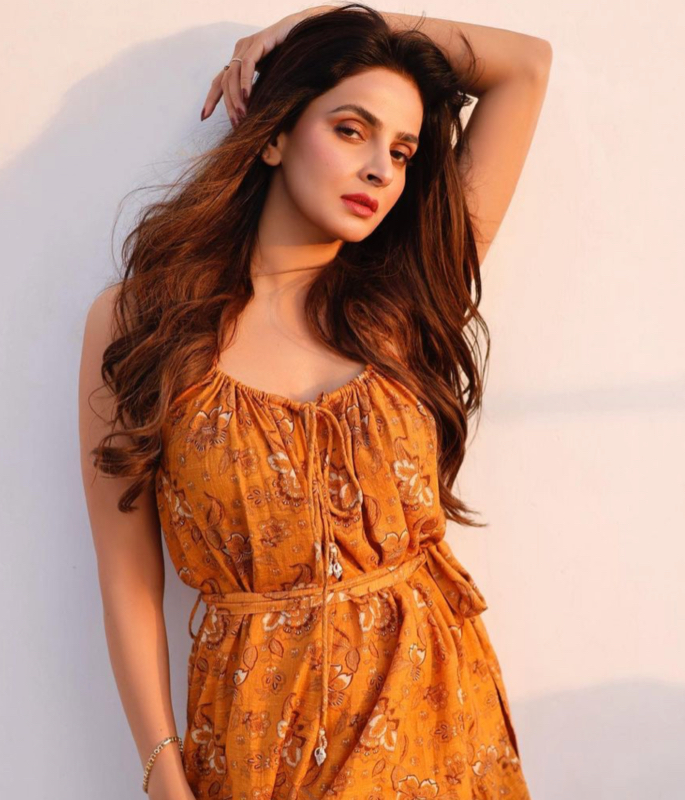 Saba has supported charitable organizations for a variety of causes in addition to acting.

She is involved in several humanitarian causes and is outspoken about issues affecting women and children.

She made a special appearance in Shuja Haider’s music video ‘Jeevan Daan’ in June 2018 to raise awareness about child abuse.

In a previous interview, Saba stated: “I encourage and urge people to invest in good education because it will shape the future of our children and our society.”

She also helped to collect Covid-19 relief funds for minorities and the transgender community through Ali Zafar’s charity trust, the Ali Zafar Foundation.

To stay in the loop on all things Saba Qamar-related, don’t forget to follow her on Instagram.

Well, there you have it, hope you enjoyed reading about the one and only Saba Qamar and now know her a bit better!

Jasmine Vithalani is an avid lifestyle enthusiast with multi-dimensional interests. Her motto is “Light the fire within you to light the world with your fire.”
‘Shamshera’ fails So should Bollywood be Worried?
Shamita Shetty ends Relationship with Raqesh Bapat