The 1980s was the golden decade for Bollywood movies, featuring big actors. We present 10 best Bollywood films from this period that you will love to watch.

"the director created sympathy for the two lovers"

The 1980s is an era when some of the best Bollywood films came out.

The die-hard fans love Bollywood films from the eighties so much that they continue to watch them – be it through satellite/cable television or via popular streaming sites.

During this period many actors were at their peak including Amitabh Bachchan, Vinod Khanna, Rekha, Zeenat Aman, Rekha, Anil Kapoor and late Sri Devi.

Equally several directors were being critically appreciated for their Bollywood films, especially the likes of Yash Chopra, Ramesh Sippy and Shekhar Kapur.

Bollywood films releasing in the eighties reflected various genres that include romance, action, sci-fi and comedy.

We feature 10 best Bollywood films from the 1980s that you can learn more about and enjoy when watching: 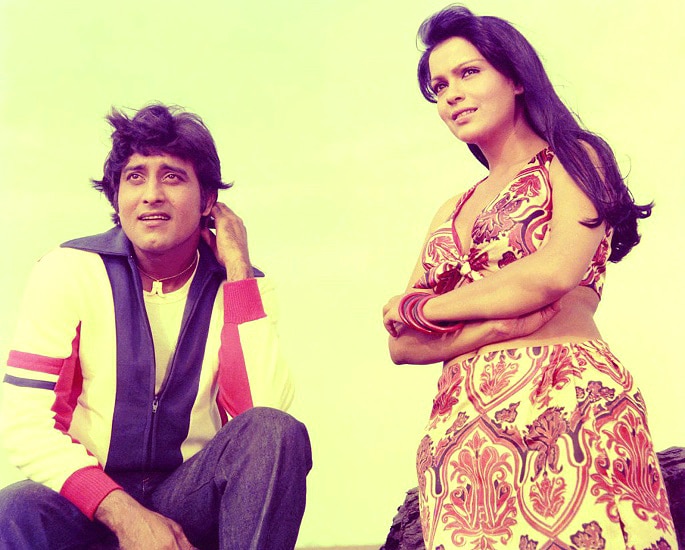 Qurbani is a super hit action film, activating the notion of friendship or male bonding. The film is an adaptation of the Italian film, The Master Touch (1980).

Whilst Rajesh is in prison, Sheila falls for Amar who is a former gangster. But their love story fizzles out when Rajesh becomes a free man.

True to the meaning of the film, Amar sacrifices his life for Rajesh in the climax of the film in rural England.

The music by Biddu was simply energetic and electrifying. 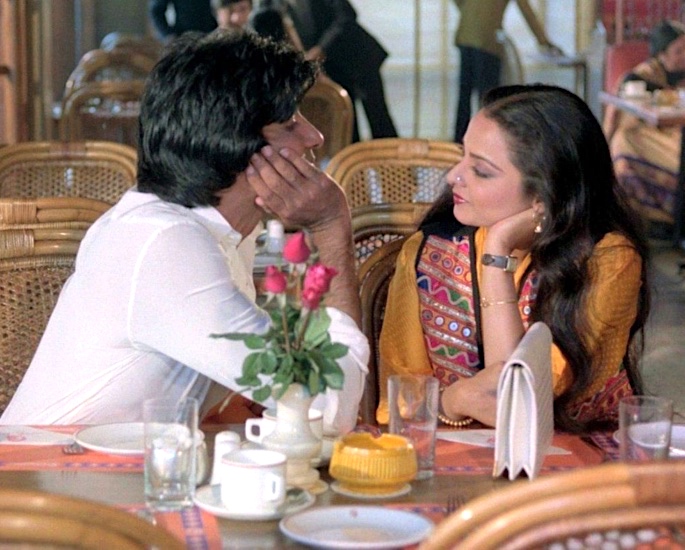 Just when everything is going nice for both couples, tragedy strikes. After Shekhar dies in war, Amit marries Shobha, sacrificing his relationship with Chandni.

Chandni ties the knot with DR VK Anand (Sanjeev Kumar) and resides in the same place where Amit and Shobha live.

Amit and Chandni bump into each other when Shobha loses her baby, following an accident.

With their respective partners suffering in silence, the former couple has an affair.

Despite the two lovers eloping, they return back to their marital partners after Amit saves Dr Anand who is stuck in a blazing aircraft on land.

Pamela Chopra, the wife of late Yash Chopra, writes about the institution of marriage and the affair between two lovers:

“The marriage is a very, very sacred institution in India, and when the director created sympathy for the two lovers who were willing to go outside their marriage and continue their love affair, he did not carry the audience with him.”

The film highlights the alleged real-life affair of Amitabh and Rekha, adding more fuel to the fire. Jaya came out of retirement to play her role. Amitabh in his baritone voice sang a few of the hit songs from the film.

Rekha was at the height of her glamour, especially in the Dutch tulip fields for the song ‘Dekha Ek Khwab.’ 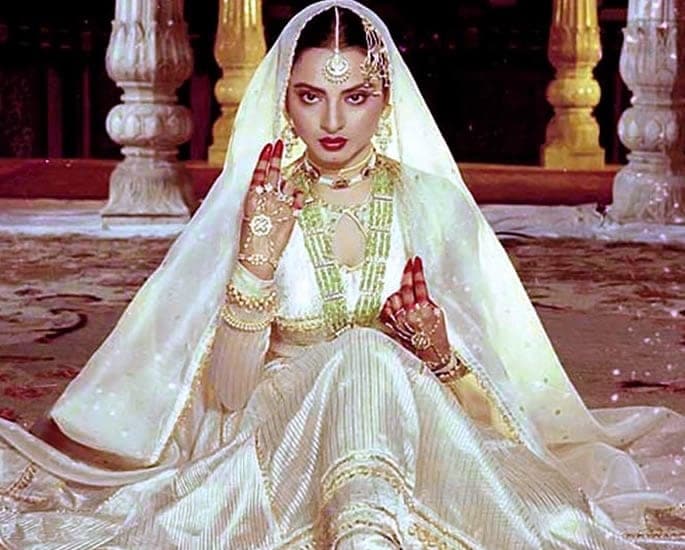 Umrao Jaan is an adaptation from the Urdu novel Umrao Jaan Ada (1905) by Mirza Hadi Ruswa about a courtesan from Lucknow.

Umrao Jaan (Rekha) undergoes training in music and dance, after being sold in Lucknow as a child.
She becomes extremely popular with the elite class of Lucknow.

She then finds solace through her childhood friend Gauhar Mirza (Naseeruddin Shah). Moving away from her suffocating life, she finally elopes with bandit  Faiz Ali (Raj Babbar).

Literary theorist Aijaz Ahmad (1992) wrote about the female character in the book, saying:

“The scandal of Ruswa’s text is its proposition that since such a woman depends upon no one man, and because many depend on her, she is the only relatively free woman in our society.

“Ruswa was a very traditional man, and he was simply tired of certain kinds of moral posturing.”

The spectacular costumes and sets, along with the music by Khayyam reflect the notion of opulence, boosting Rekha’s performance.

The film has two hit Asha Bhosle ghazals such as ‘Dil Cheez Kya Hai’ and ‘In Ankhon Ki Masti.’ 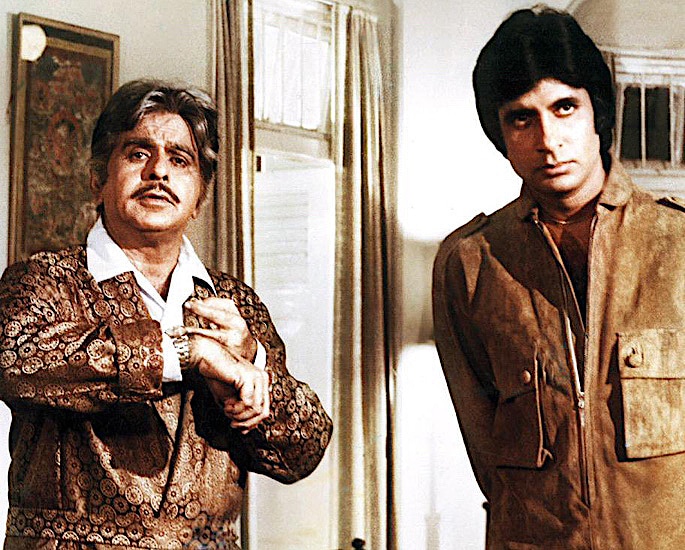 When gangster JK Verma (Amrish Puri) kidnaps Vijay as a child, he realises his father opts for duty over paternal affection. This creates a division in the father-son relationship.

Subsequently, despite pleading his innocence, Ashwini arrests Vijay twice for crimes he did not do. Refusing to help his son, Ashwini is adamant that the law should take its course.

In the midst of all this is Vijay’s suffering mother Sheetal Kumar (Raakhee). She is caught in the middle of her husband and son as JK Verma kills her.

The film has powerful dialogues and popular songs such as ‘Humne Sanam Ko Khat Likha’ and ‘Jaane Kaise Kab Kahan.’ 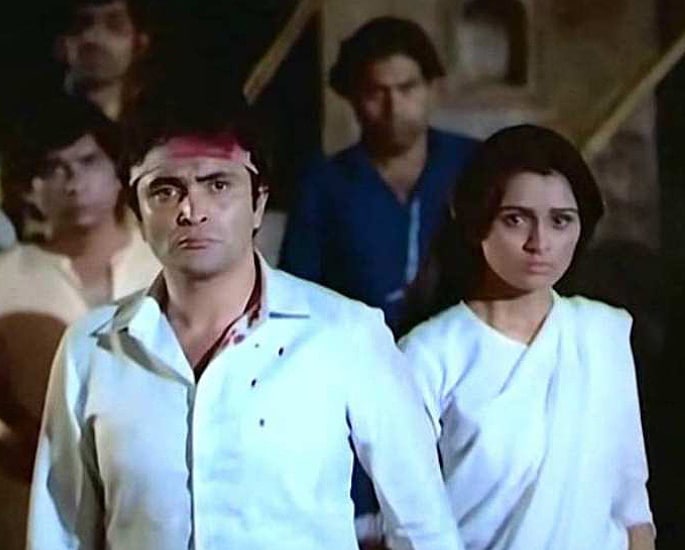 Devhdar begins to fall in love with Manorma, but cannot express his feelings as he is a poor orphan, whilst Manorama is the daughter of Bade Raja Thakur (late Shammi Kapoor).

But shortly after their marriage, Kunwar Pratap Singh meets his death in a car accident.

She then returns home after the elder brother of her husband, Raja Virendra Pratap Singh (Raza Murad) inhumanely rapes her.

When Devhdar learns about how Manorama’s family is treating her widow status, he comes to the rescue.

In 1983, the film won four Filmfare Awards under different categories. The film has a wonderful soundtrack, with several meaningful songs. 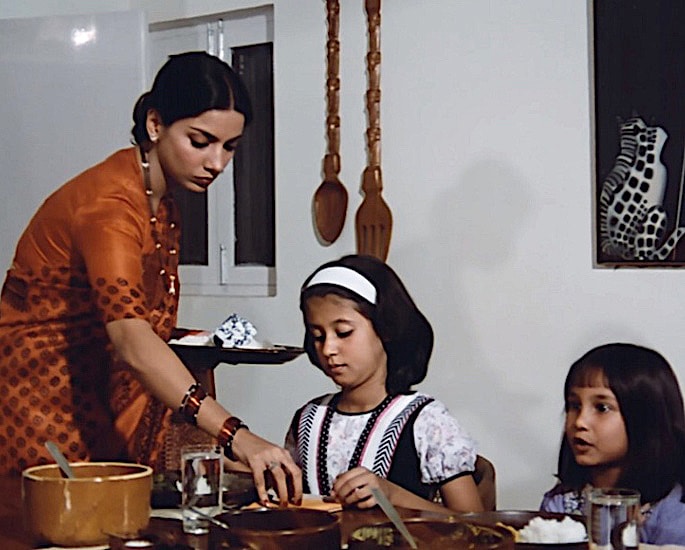 DK’s life becomes difficult when he collects his son Rahul (Jugal Hansraj) from a boarding school and brings him home. Rahul is DK’s blood son from a short affair he has with the terminally ill Bhavna (Supriya Pathak).

Following the death of Bhavna, DK and his family adopt Rahul. The presence of Rahul affects the relationship between DK and Indu. But in the end, Indu finally accepts Rahul and forgives DK’s mistake.

Suri (late Saeed Jaffrey) plays the supportive friend of DK in the film.

The film highlights the notion of infidelity and illegitimacy in a glossy yet simple manner. 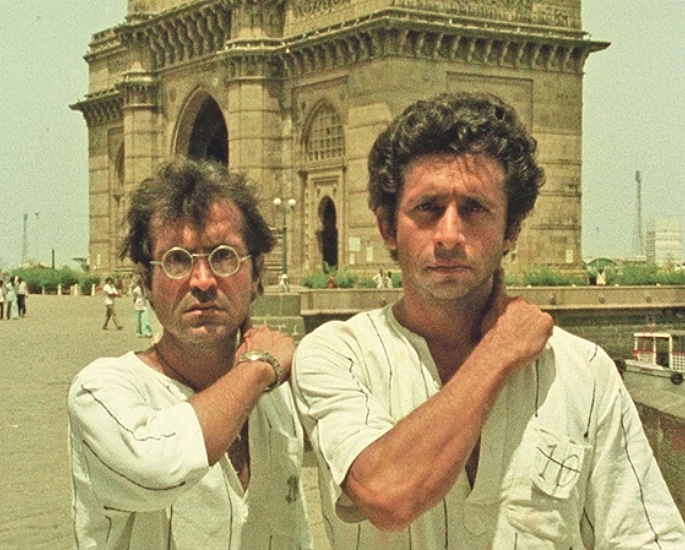 The photographers unravel the shady business between Tarneja and his likewise nasty opponent Ahuja (Om Puri).

One of the builders murders the commissioner and wins a contract to construct a flyover, which collapses after a short while.

Vinod and Sudhir lose D’Mello’s corpse when trying to safeguard it as evidence. This leads to a series of events where several people are chasing each other.

The film finishes on a travesty of injustice, with Vinod and Sudhir having to face the law for the fly-over collapse.

The film refers to Bombay’s corrupt politicians from the eighties. 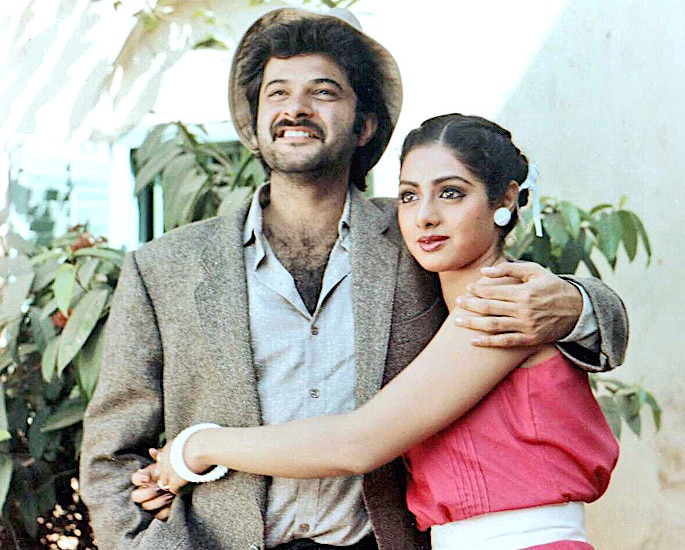 Seema also falls in love with Mr India not knowing who he really is and also convinces her boss Mr Gaitonde (Anny Kapoor) about him.

Seema performs to the famous song ‘Hawa Hawai’ and imitates Charlie Chaplin in a scene too. 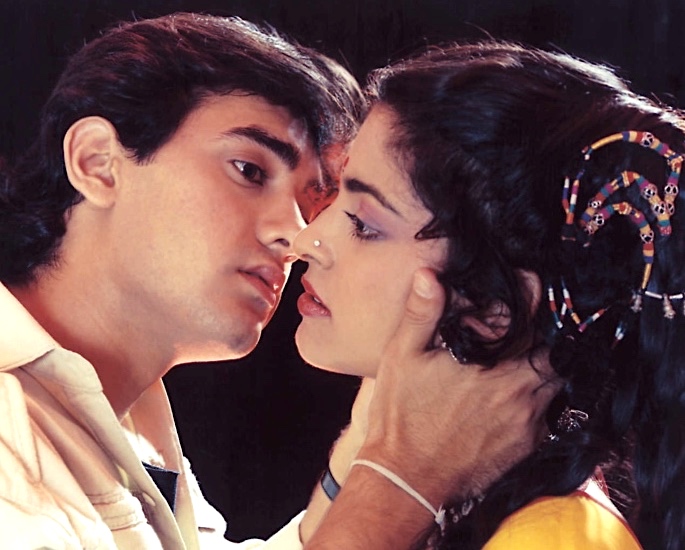 Qayamat Se Qayamat Tak is a sparkling teen romance that takes a leaf out of Romeo and Juliet (1595) by William Shakespeare.

Dhanraj murders Dharampal because he impregnates his sister Madhumati (Seema Vaz) and then refuses to marry her. Madhumati kills herself as a result.

Consequently, Dhanraj is sent to prison. After serving his sentence he joins his family who has a flourishing business.

Meanwhile, during a private visit Raj (Aamir Khan) catches the attention of Rashmi (Juhi Chawla) at a wedding and falls in love with her.

The two meet again holidaying in Mount Abu, India and express their love, despite their families being enemies of each other.

Raj and Rashmi run away when latter’s father, Randhir Singh (Goga Kapoor) comes to know about their relationship.

Making a home for themselves in a forest, the couple seems happy together.

On the other hand, Randhir assigns a contract killer to murder Raj. But when both families go looking for them, Randhir’s goons shoot Rashmi twice.

After overpowering the gangsters, Raj commits suicide by stabbing himself with a dagger.

The film finishes, with both families heading to Raj and Rashmi who lie dead together amongst the sunset behind. 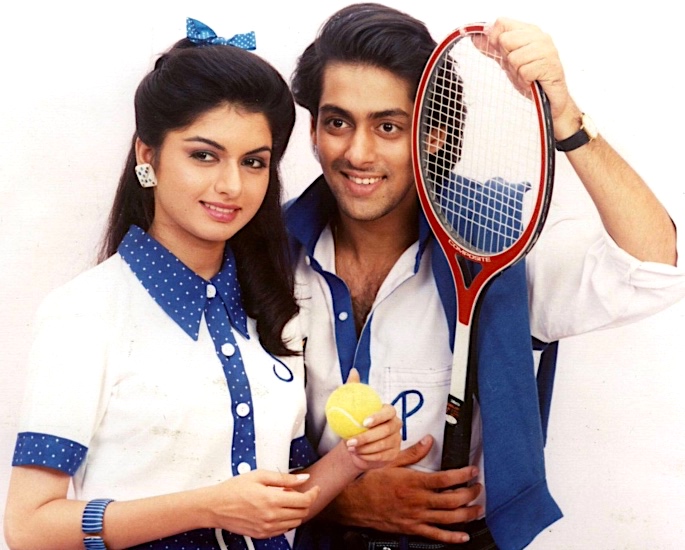 Maine Pyar Kiya is a musical film, reflecting the romance between a rich boy with a poor girl.

Karan leaves Suman at Kishan’s house as he has to travel overseas for his business.

Kishan and his business partner Ranjeet (late Ajit Vachani), along with his son Jeevan, create obstacles in the way of the two love birds.

Prem’s mother approves her son’s choice but has no credible say on the matter.

Upon Karan’s return, Kishan accuses him of leaving his daughter to try and woo his son. Following the humiliation, Karan and Suman return back to their village in the country.

Not happy about being away from Suman, Prem follows them in pursuit of his love.

Karan who still is furious by the accusations of Kishan, tells Prem that he can only marry his daughter if he earns money by working and living separately.

With sheer grit and determination, Prem toils away and earns some money. Even though Jeevan and his henchmen try to kill Prem, he survives.

Prem pleads with Karan who eventually feels sorry for him and agrees to give his daughter away.

So there we have it, 10 best Bollywood films from the eighties period.

So if you are a fan of Bollywood films, and have missed any of the movies from our list, watch them on some of the digital platforms available online.

Faisal has creative experience in the fusion of media and communication and research which increase awareness of global issues in post-conflict, emerging and democratic societies. His life motto is: "persevere, for success is near..."
Actress Koena Mitra gets 6 Months Jail for Bounced Cheque
Why does Diljit Dosanjh not attend Bollywood Parties?