A second-year student at the University of Manchester has launched a food business which specialises in Pakistani vegetarian cuisine.

"After that, Malik’s Tiffin Boxes was born.”

She started the business as a result of having spare time during lockdown and needing an income.

In addition, her passion for cooking, inspiration from her father and a desire to start her own business led to the new venture.

Meals are freshly prepared and are even delivered within the Fallowfield area of Manchester.

Although the business has just been launched, the inspiration actually came in 2014. Leila explained:

“I often bought in a packed lunch and it was usually leftover curry from the night before at home.

“Both my parents are seriously good cooks and I was more than happy with this arrangement.

“One day I was sitting eating vegetable rice, seekh kebab, and pakora for lunch when one of my friends asked to try a bit.

“He was so impressed, I remember him saying ‘nah that’s seriously good, you know I’d actually pay for that!’ After that, Malik’s Tiffin Boxes was born.”

As a result, Leila and her father cooked the meals the night before school, however, Leila said, “except the pakora, it really has to be cooked fresh so it’s nice and crispy”.

The pair made between 20 and 30 takeaway boxes. Leila would then take them to school and distribute them before lunch.

Due to needing an income whilst at university, Leila has restarted the food business. She was also inspired after creating an Instagram page with her flatmate called ‘HalfAsianChefs’.

According to Leila, they would “often take photos of our cooking together and post it up on this page for fun”.

The account grew a following and they became known for their food. When Leila returned to university after lockdown, she decided to restart the business.

She told The Tab: “I was going to flip ‘Half Asian Chefs’ into ‘Malik’s Tiffin Boxes’, and make money by doing two things I love: cooking and running a business.”

Leila pointed out that takeaways had been thriving during lockdown. She also noted “how much more aware of hygiene and proper kitchen sanitisation I am now, and the fact that I had to cancel one week because I was waiting on a test result”.

Leila has received an encouraging response to the food business. She said:

“It’s a bit of a mad one-woman-show, as I’m doing marketing, production, sales, shopping, finances, etc. on my own (as well as being a full-time English student), but I enjoy it, it gives me energy and a feeling of independence.”

She also expressed her appreciation to her supportive friends and boyfriend who delivers the food on his bike. 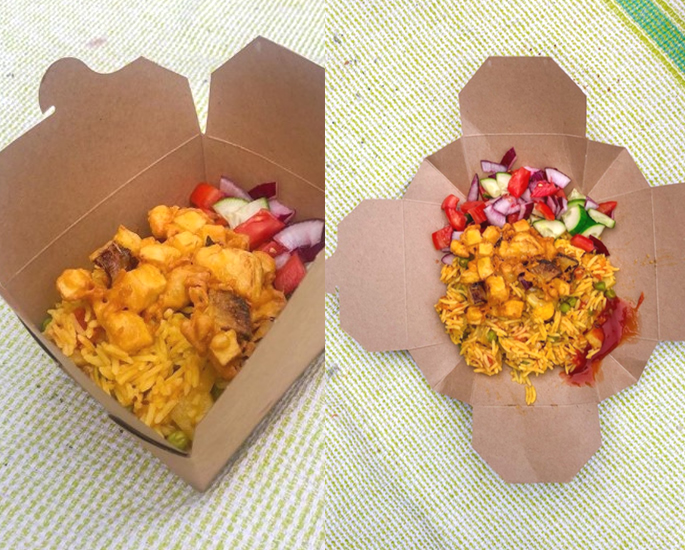 Leila hopes to expand the menu in the future.

“There’s only one of me and I can’t cook several different dishes at once as I only have one really big pot!”

She also hopes to find better software in which people can order their food. She currently uses Instagram which “has been working so far but isn’t perfect”. She prefers something where people can “enter their addresses, pay online and select a time-slot”.

Leila is thinking of having a different menu each week. Alongside the new menu, she wants to include “a video of myself cooking it just to show people what the food is”.

She added: “It’s always going to be Pakistani food, but a lot of my customers aren’t Pakistani so they won’t know what it means if I tell them this week’s box is aloo gobi and pilau rice.

“I think the video will help with reach as well, it’s so satisfying watching those Instagram videos of people cooking and I hope Tiffin Boxes will be the same.”

Her father was her main inspiration, who started his own business when she was young.

“He and the success of his business is living proof of his principles and such an inspiration to me.

“Even if Tiffin Boxes never expands past 20 boxes a week, I know that he’ll be proud of how I decided to take the risk of starting a business, and of all the work I’ve put into it.”

Leila’s father has supported her despite warning her of the difficulties within the food industry.

Although there have been obstacles, Malik’s Tiffin Boxes has been thriving.