A UK-based man who had been visiting Punjab was violently assaulted outside a dhaba in Ludhiana by several young men.

A police investigation is underway after a non-resident Indian was violently assaulted at a dhaba in Punjab.

The violent incident happened on the night of January 15, 2023.

The victim was identified as 45-year-old Deepak Chhabra.

Based in the UK, Deepak had visited Ludhiana to attend his niece’s wedding. He was expected to return to the UK on January 24.

Deepak and his friends Tarun and Divansh had gone to a dhaba on Rekhi Cinema Road for dinner, where a group of young men were there.

The group were causing trouble, shouting and throwing water at each other.

Some water landed on Deepak and he told them to stop.

The group responded by dragging Deepak outside the dhaba and assaulting him. 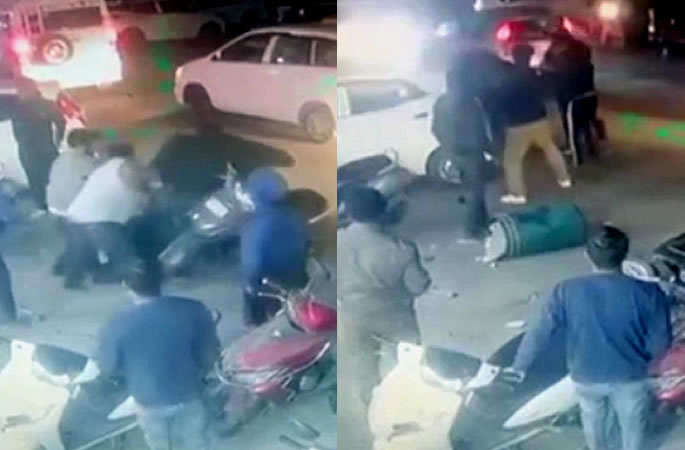 CCTV footage showed the group beating Deepak in the parking area, with the victim even being thrown into a parked motorcycle.

His friends tried to intervene but the perpetrators continued their assault.

The group also took chairs and plates from the dhaba and threw them at the victim.

The perpetrators made a phone call and more men turned up with iron rods.

Deepak was beaten unconscious and thrown onto the road.

The group began to leave the area but out of fear they would return to resume their attack, staff members at the dhaba locked Deepak in the bathroom.

The owner then called the police.

When officers arrived, the group fled the scene.

Deepak was taken to Dayanand Medical College and Hospital where it was revealed that he suffered severe head injuries.

The victim’s cousin, Kuldeep Chhabra, said his condition is stable, however, he is still unconscious.

A police case under Sections 307 (attempt to murder), 323 (voluntarily causing hurt), 341 (wrongful restraint), 506 (criminal intimidation), 148 (rioting, armed with deadly weapons) and 149 (every members of unlawful assembly guilty of offence committed in prosecution of common object) of the Indian Penal Code was registered against 15 suspects.

While many of the suspects have not been identified yet, a few were identified as Rohit Kataria, Gagan, Aman Goyal, Anish Bholu and Simrat Singh.

They were identified after a mobile phone and motorcycle belonging to the suspects were left at the scene and were subsequently given to police.

It is reported that the men are residents of Gulchaman Street and its surroundings.

So far, police have arrested Rohit and Simrat.

Officers are now working to locate and arrest the other suspects.

Dhiren is a journalism graduate with a passion for gaming, watching films and sports. He also enjoys cooking from time to time. His motto is to “Live life one day at a time.”
Royal Nawaab replies to Couple’s Claim Waiters ‘wanted to fight’
Anant & Radhika enjoy star-studded Engagement Event