The Sufi magic of Sain Zahoor

Sain Zahoor is a Sufi street musician and wandering minstrel from Pakistan with an incredible vocal style that takes you beyond entertainment and embodies the cultural wealth and soul of Pakistan’s popular street culture. DESIblitz was present at his performance at The Drum in Birmingham (UK).

Sain Zahoor is an incredible Sufi musician from Pakistan. His recent performance on 8th October 2011 at The Drum in Birmingham captured the audience’s attention as soon he walked on stage wearing bright colours and a Tumbi with colourful tassels. His presence was very self assured and comforting as he commenced singing tales from the folklore past.

Sain Zahoor, also known as Saieen Zahoor or Saeen Zahur Ahmad. Sain, which is is not his first name but a Sindhi honorific title, spent most of his life singing in Sufi shrines and developing his magical voice which many times put listeners of his music into a trance.

Throughout his singing at The Drum he was inspired on by chants and shouting from the audience, who were mesmerised by his lyrics and hypnotising flow. Every once in a while in the chorus of a song, Sain span around, moving his Tumbi round in circles. 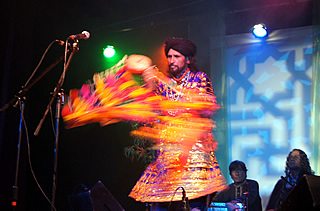 His dancing is of a frenzied style with the tassels on his instrument whirling around him. His singing style is unique, colourful and full of energy. His voice has an earthy tone, almost cracking at the edges, but capable of a strong vocal and emotional range.

Sufi singing is focused on poetry with themes of devotional love, which shares much with Persian mystic poets like Rumi and with other South Asian traditions such as the Bhakti cult.

Half way through the show Sain stamped his foot hard onto the stage floor and shattered his ankle bells, which were immediately brushed away by one of the backing singers so not to cause any harm to Sain.

At some points during the show people from the audience threw money onto the stage, a traditional way of showing a sense of appreciation for this magical Sufi artist.

Sain was born in the Okara district of the Sahiwal region in the province of Punjab, Pakistan. He was the youngest child in a rural peasant family. He started singing at a tender age of five and from that time he had dreamt of a hand beckoning him towards a shrine. He left home at the age of thirteen, roaming the Sufi shrines of Sindh, Punjab, and Azad Kashmir, making a living through singing. 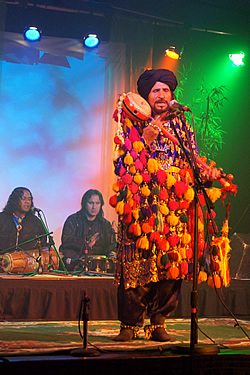 Whilst walking past a small shrine in the south Punjab town of Uch Sharif (known for its Sufi traditions), Zahoor recalls seeing what he often dreamt about. He says, “Someone waved at me with his hand, inviting me in, and I suddenly realised that it was this hand which I saw in my dream.”

Subsequently, Zahoor studied music under his first teacher of Sufi verses, Raunka Ali of Patiala Gharana, whom he met at Bulleh Shah’s dargah (shrine). He also studied music with other Uch Sharif-based musicians.

Zahoor is illiterate but he is known for his memory of song lyrics; mostly he sings compositions of the major Sufi poets, Bulleh Shah, Shah Badakhshi and others.

He sang an ost in 2011 for West Is West a British comedy-drama film, which is a sequel to the 1999 comedy East Is East. He also acted and appeared in the film.

At the end of the show Sain and his band bowed down and left the stage stage but were called back by the crowds for an encore. Zahoor agreed to one more song and then finished off the show with a three minute prayer.

Before Sain had the opportunity to leave the stage for a second time, he was immediately surrounded by members of the audience who shook his hand, hugged him and had photographs taken with him on stage.

The magic of this Sufi singer brought a sense of uplift to the whole evening with a buzz in the atmosphere of The Drum amongst everyone who saw Sain Zahoor perform his repertoire of songs live and direct in Birmingham.

Thanks to The Drum (Birmingham).