Sain Zahoor concert at The Drum

Acclaimed Sufi singer, Sain Zahoor comes to The Drum in Birmingham to perform his simple but uncompromisingly powerful message of spiritual love and tolerance in pure Sufi musical form.

“Music is nutrition for the soul.”

The Drum in Birmingham are proud to present Sufi singer Sain Zahoor in concert on Saturday 8th October 2011.

Born in 1937 in the Okara region of Punjab, Sain Zahoor has spent most of his life singing in Sufi shrines (dargahs), festivals and as a street performer.

Like some traditions of Sufi music, Zahoor has a passionate, high-energy style of singing, often dancing in a frenzied style with the tassels on his instrument whirling around him. His voice has an earthy tone and capable of a wide vocal and emotional range. His ‘magical’ voice is known to put some listeners into a trance. 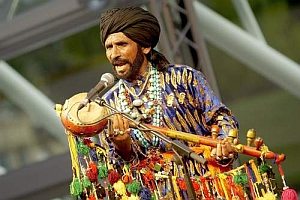 Sain’s performances are mystical, colourful and project strong devotional and inspirational compositions. He is accompanied on stage by a small ensemble of musicians featuring harmonium and percussion.

Zahoor’s form of singing is highly indigenous and totally localised in Pakistan. In his early years, Sain studied under Sufi masters and learnt music from Ustad Ronaq Ali of Patiala Gharana, whom he met at Bulleh Shah’s shrine (dargah), Sain Marna and other Uch Sharif-based musicians.

Subsequently, Sain continued with his art and singing and self-taught himself to develop his performances which embody the cultural wealth and soul of Pakistan’s popular street culture where he began his long journey with music and spirituality.

The tradition of street singing is centuries old, its origins are vague and lost in the dust of time. Street Singing is an art that has evolved through individual interest or religious devotion. Street performers like Zahoor are supported by the community and neighborhoods at large.

Like most Sufi poets and musicians, Zahoor has music ingrained deep within him and is an advocate of spreading the message that “Music is nutrition for the soul.”

In 2006, Sain was nominated for the BBC World Music awards, the year he produced his first album titled Awazay (“Sounds”) through Matteela Records. He emerged as the “Best BBC Voice of the Year 2006. In 2007, he helped produce the soundtrack to the Pakistani film Khuda Ke Liye.

‘The closest anyone alive will get to being in the presence of the Sufi mystics of yore.’ 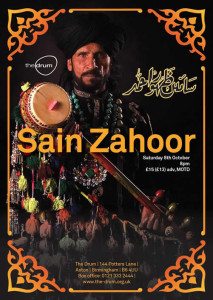 Sain has travelled the world performing his captivating devotional music, transporting audiences to essential places where music, love and the divine, dance and mingle together. He has performed in many European and Asian countries including Norway, Belgium, Dubai, Malaysia, China and India.

The Folk Heritage Institute of Pakistan and the Belgium Television has released documentaries on life and performances of Sain Zahoor.

In 2011, Zahoor sang, acted and appeared in ‘West Is West’ a British comedy-drama film, the sequel to the comedy ‘East Is East’ made in 1999.

Watching and listening to Sain Zahoor will transport you to the magic of true Sufism in vocal, musical and dance form. A performance not to be missed on 8th October 2011, at The Drum in Birmingham.

Jas likes to keep in touch with the world of music and entertainment by writing about it. He does like hitting the gym too. His motto is 'The difference between the impossible and the possible lies in a person's determination.'
Brit Asia Music Awards Winners
2011 Brit Asia Music Awards