In an exclusive Gupshup with DESIblitz, twin artists, Amrit and Rabindra Singh talk about ‘Past Modern’ miniature art that combines Indian tradition with contemporary Western thought.

“We see ourselves as ‘twindividuals’ because it’s our twin-ness that makes us unique.”

Twin artists, Amrit and Rabindra Singh are the proud owners of award-winning paintings that have encapsulated a new kind of British Art.

Their incredible work has been exhibited in many museums and galleries across the UK and the around the world.

They have fashioned a new ideology in Art which blends the unique Indian miniature tradition with rich contemporary western genre.

‘Past Modern’ is a term they use to describe their own work, which rejects the idea that being modern necessarily means being seen to be progressing all the time and discarding the past.

It asserts that modernity and tradition go hand in hand. Their own work is influenced by many centuries of world art, ‘from ancient European art and medieval manuscripts to Western Renaissance, Classical and religious art’.

Although famously known for their paintings, the twins are also published illustrators, writers and have even directed films.

DESIblitz brings you an exclusive interview with this accomplished pair. 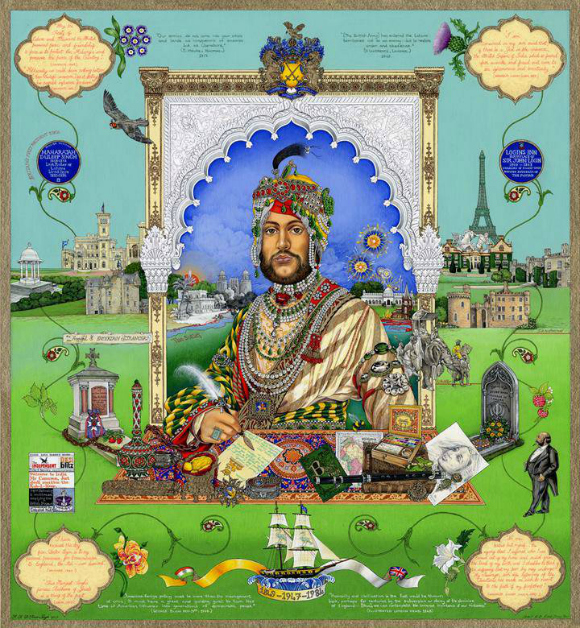 Your work delves into culture, existing trends and politics. What particular messages do you want to convey through your work?

“The majority of our work promotes the equal and ongoing relevance of traditional and non-European art, values and culture within modern art and society.

“It’s about redefining accepted notions of culture and identity, about challenging perceived differences between east and west, modernity and tradition and the ingrained cultural prejudices that stem from persisting notions of western superiority which we feel are rooted in outdated colonial attitudes.

“It’s about showing how art is a universal language and powerful medium of communication for influencing opinion and redefining how we view others and how others might view us.

“On a personal level, another key message of our work is to assert our pride in our identity as British Asians.”

Which Miniature Painters inspired you?

“Rather then being inspired by any specific artist or artists we are influenced by the genre of miniature painting in general.

“Our favourite style within that, however, is the Imperial Mughal period – not just because of its exquisite technical skill but because of its focus on social documentation, political commentary, satire and allegorical language.

“To us the Mughal period represents a Renaissance in Indian art and culture.” 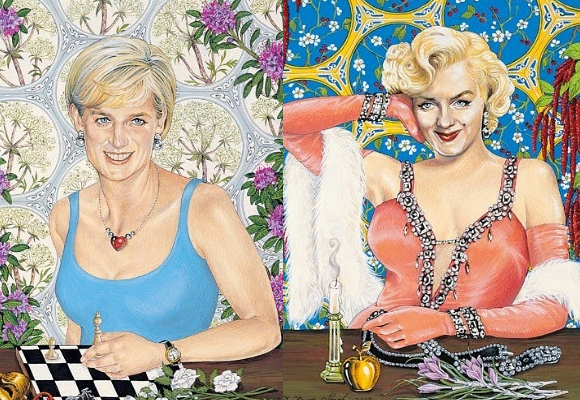 What are the challenges and obstacles do you face as women and as artists who have taken a Non-European perception?

“In our personal life and career we have sought to demonstrate that a harmony can exist between East and West, one that finds a workable balance between respect for tradition and the need or desire to be liberal thinking.

“Being women artists of Indian origin has heightened the challenges presented to us in this respect.

“We’ve not only had to defend against the seemingly unquestioned premise of  ‘west is best’ in general but popular western perceptions of Asian females as being devoid of status, ‘shackled’ to tradition and coerced into life decisions through emotional blackmail and fear of social outcast.

“We were pressured to conform to Western ideals of art – throughout our career we have had to resist being pigeonholed as ethnic or dismissed as ‘too culturally different’ to be seen as mainstream.”

“But attitudes have changed, despite the struggles our contribution to contemporary and British art has been recognised with an MBE, an Honorary Doctorate, with solo exhibitions at mainstream venues such as the National Portrait Gallery and more recently, our being cited by Simon Schama as the artistic face of Britain.

In ancient times, several artists worked together to create miniature paintings. Some specialise in line drawing while others excel in colouring. What are each of your preferences?

“We recognise that we each have certain strengths and so, on occasion we will allocate specific creative elements accordingly.

“But as a rule we try to share the different aspects of our work evenly (including the research, the development of the composition, the decorative details, portraiture and architecture).

“We both prefer portraiture and decoration which are far more interesting and enjoyable to work on than buildings for example – whose repetitive, straight lines, dull colours and textures, can be very tiresome and monotonous to produce.” 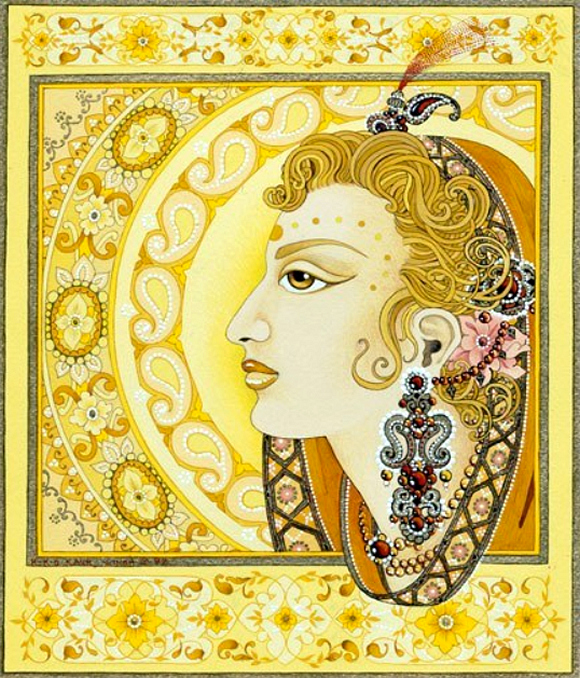 “We think ‘Post Modern’ has been defined and interpreted by different people in various ways.

“For us, it refers to those art movements within contemporary art which purport to push the boundaries of modern art to create new and so called cutting edge art forms such as (but not exclusively) installation, conceptual, video and multimedia art and blur the traditional distinctions between high and low art and popular culture.

“It’s a general movement in art, which in order to be deemed legitimate as contemporary art expression, seems to advocate the need to explore, ever changing, alternative mediums.”

Do you think traditional Miniature Art can be fused with Contemporary Art to portray existing present issues?

“Yes – in fact that’s exactly what our own art does. We are not just influenced by miniatures in the sense of mimicking or taking wholesale from that tradition.

“Instead, we have reinterpreted it for modern audiences by looking at it with a contemporary eye and making it relevant for today. We have developed it through different sources of inspiration that draw on global artistic and cultural traditions,

“Also new mediums and technologies such digital art and animation – to create an eclectic art form that responds to and reflects on current debates as well as challenging established norms and views within contemporary art and society.” 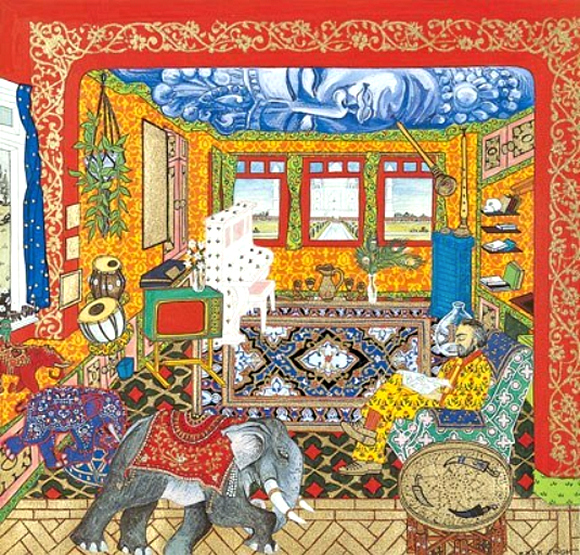 Apart from painting, what are the other interests or hobbies do each of you have?

“We share the same interests. Including listening to and playing music (one of us plays the flute, the other the piano).

“We also love watching movies and enjoy getting together with friends at home.”

Being together, wearing similar outfits, painting to gather both of you have been always known as one. Have you ever been concerned about expressing your individuality?

“We have never had any issues with being seen, or presenting ourselves, as one artist. Our dressing the same and working together is an expression of our individuality – not just as twins, but as British Asians and as artists.

“Society defines and dictates individuality – through peer pressure, through western values and through the advertising and fashion industry for example.

“We see ourselves as ‘twindividuals’ because it’s our twin-ness that makes us unique.” 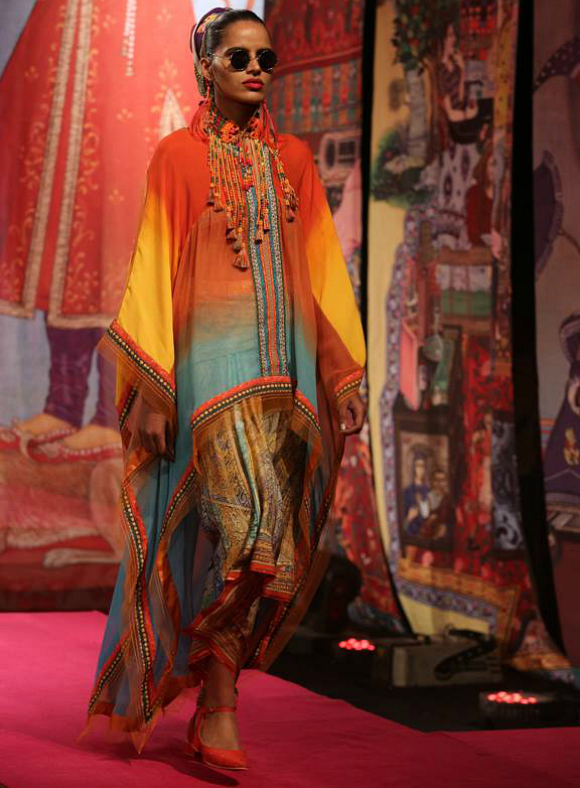 What are your future aspirations or any new ventures planned?

“We are currently researching a new series of artworks looking at the history, politics and culture of Indian textiles.

“It’s a celebration of India’s pioneering contribution to the development of and global trade in textiles but also its link with Empire, colonialism, slavery, global power struggles and conflict and modern day legacies.

“Apart from that, we are working on private commissions and developing a Singh Twins label for a range of merchandise (mainly fashion accessories and home furnishings) inspired by our artwork.”

Together Amrit and Rabindra have reinvented a new kind of art for British culture, one that truly reflects modern thinking that remains steeped in multicultural mores.

Images courtesy of The Singh Twins