The Singh Twins talk Art and ‘Slaves of Fashion’ Exhibition

From Levis to Liverpool, The Singh Twins’ ‘Slaves of Fashion’ exhibition explores Britain and India’s shared textile history in the age of Empire and today.

The multi-talented artists, illustrators, designers and filmmakers exhibit a collection of nearly 20 dazzling artworks at Wolverhampton Art Gallery. The exhibition explores the relationship between Britain and India.

Here, Amrit and Rabindra Singh focus in on Indian textiles, Empire, enslavement and consumerism with great relevance to today.

Internationally known for their hand-painted work in the Indian miniature tradition, both now combine this with digitally created imagery. The series first stuns with 11 digital fabric artworks which demonstrate a different theme of India’s textile industry.

Alongside these works appear another nine paper artworks. They further explore trade, conflict and consumerism both in the age of Empire and today.

DESIblitz talks to The Singh Twins about the background to this insightful exhibition at Wolverhampton Art Gallery. We take the chance to find out more about the motivations and artistic journey behind it. 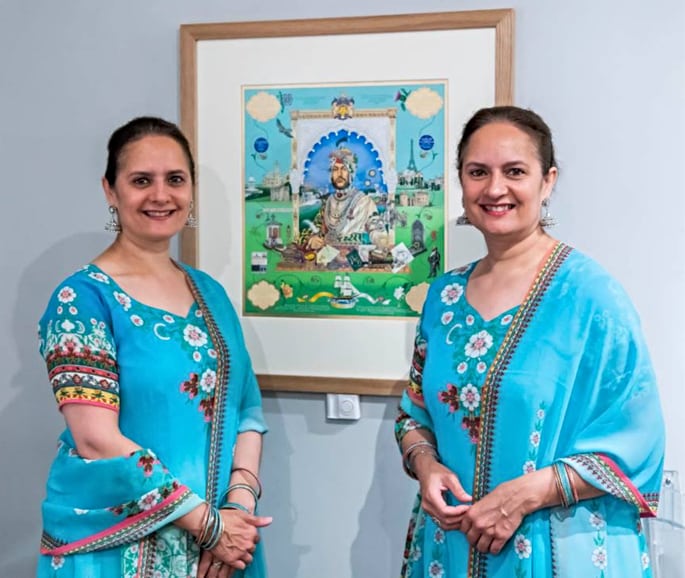 The Singh Twins are just as known for their memorable name as their work. Contributing to the increased presence of Sikhs in the arts, it also hints at the collaborative nature of their work. They elaborate on the origins of their name:

“We’ve always used the surname Singh growing up in this country and the protocol is use your father’s surname, so that’s just been a natural surname for us to use.”

“Then progressing from that, Singh Twins, I guess it had a better ring to it anyway than ‘The Kaur Twins’ or ‘The Kaur Sisters’. So it’s just been a natural development from growing up here and using that as a surname.”

As recognisable as their moniker has become, and even with their increased fame, it still leads to some amusing situations:

“I think people are more aware of the fact that Singh is usually associated with male Sikhs and there have been occasions where we’ve walked into exhibitions and people have expected two brothers to walk through the door [laughs].”

“And one occasion, we were actually talking to a member of the public, who was being very complimentary about our exhibition and we thought he knew who we were.”

“But the final sentence was: ‘Oh and have you met the brothers? Do you know them? Are they still alive?’”

“I said, ‘Actually, we are the sisters…’ It’s caused a little bit of confusion over the years.”

The Artists and Their Aims 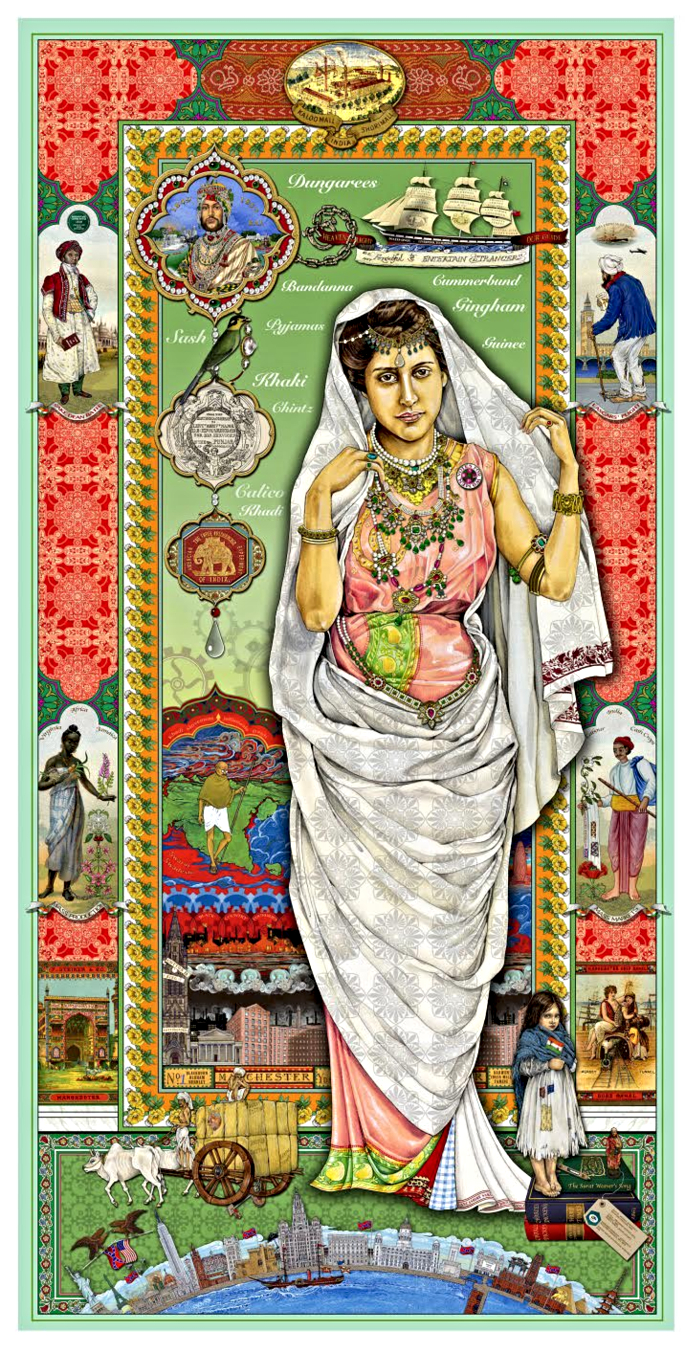 While they acknowledge many influences, their work is known for drawing on the Indian miniature tradition. They describe this as a “very narrative-detailed and symbolic style”.

However, they explain how they’ve developed the style by mixing it with other global artistic traditions in their work:

“There’s traditions from the past, the pre-Raphaelites, the Renaissance art forms.”

In fact, they state online that their work “bridges many worlds, the ancient and the new”. When discussing this further, they explain how they’ve brought modern technology to these other artistic traditions.

For instance, with the ‘Slaves of Fashion’ exhibition, digital software contributed to composing the final pieces. Moreover, it then helped to create them:

“With these works on the walls around us, they actually only exist as a digital file because they bring together hand-painted elements, which of course we’ve created ourselves.”

“But also scanned archival and historical material that have been manipulated in the computer.”

This combination clearly fulfils their aim of bridging “two worlds”. Although, they also describe their work as “past modern as well, opposed to postmodern.”

Here, they skilfully make traditional art forms and histories relevant to a contemporary audience. Generally, they love to look at history.

For the ‘Slaves of Fashion’ exhibition, they reveal their main sources of research into the history of Indian textiles:

“It’s looking at objects from National Museums Collections, Wolverhampton Art Gallery collections and seeing how those tie into the historical story. But then how do those historical stories relate to us today in the here and now?”

“So within the ‘Slaves of Fashion’ exhibition here at Wolverhampton Art Gallery, there are contemporary artworks that respond to the historical stories that we’re telling.”

They explain this further:

“We’ve never been artists that want to separate tradition from modernity or even history from contemporary life. There’s always that connection.”

This creates a compelling contrast in the series. A lightbox portrait features key historical figures like British-born Indian Princess and suffragette, Sophia Duleep Singh. Then on their paper works, we see Theresa May and Donald Trump.

The Process and The Singh Twins’ Audience 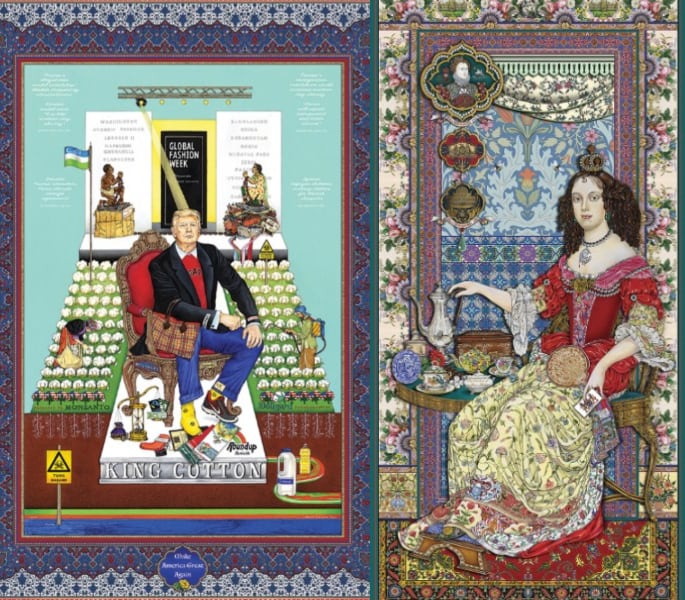 In fact, The Singh Twins are unbelievably thorough in their research to create their artwork. This is immediately evident in the intricate detail in individual pieces with allusions to symbols like the Tree of Life.

“Our artwork really begins with a period of research before anything else happens because we are often dealing with social, political, historical themes and we try to be as accurate as possible within those.”

“Of course, there’s a lot of artistic licence within the way in which we present those because we’re always trying to challenge people in their views of history, culture and identity.”

“It’s very much our job, we see, not getting people to see things as they think they are, but in broader senses –  challenge their perspective, how they view the world around them and how they interact with people around them as well.”

Indeed, the exhibition is very educational for a wide range of people, regardless of their knowledge of Indian’s colourful history.

The duo aptly points out the multiple perspectives in history. Naturally, the victor’s bias can limit today’s audience from understanding the full picture.

However, they set out to fill these gaps in knowledge, even discovering that:

“Denim fabric actually originated in India in the sixteenth century and was used by sailors.”

The fabric appears in their piece ‘Indigo: The Colour of India’ in the form of blue Levi jeans. In the spirit of mixing the past and present, it’s Mumtaz Mahal who sports them.

Mahal was the Mughal emperor, Shah Jahan’s favourite wife, famously building the Taj Mahal as a tomb for her.

With this, they truly fulfil their goals of turning associations like the American Dream and freedom “on its head – like cultural ownership and shared history and identity, trying to bring out interesting things that people may not necessarily be aware of.”

It seems that The Singh Twins are very much educators as well as artists.

Watch our full interview with The Singh Twins here: 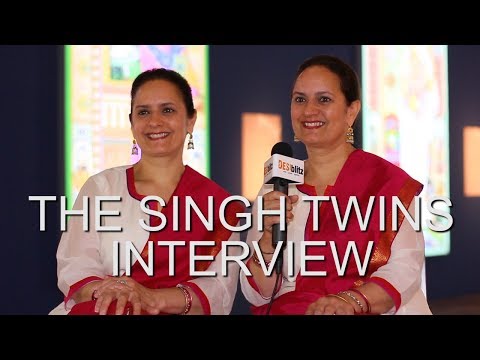 The Desi Community and The Arts

Nevertheless, success in the Arts is unfortunately rare for Desis.

The Singh Twins understand the difficulties of an artistic career for Asians. They crucially recognise why the Asian community and parents don’t encourage this career, favouring STEM subjects.

With their characteristic thoughtfulness, they explain:

“I think any parent wants their children to do well in life and art traditionally, across the board, has never been a career option.”

“But I think particularly as Asians as Britain for example, I think as a community that has essentially been an immigrant community, I think our earlier generations were, pretty much…they had their plateful with trying to keep their head above water, with trying to carve a new life in a strange place. Art was not a priority for them.”

They recognise that Art is a luxury for many but give us hope for the future:

“We have a lot of professionals, particularly young professionals within our community, who are really taking a real interest within the Arts now.”

“I think also from a point of view of practising artists within our community, I think there are a lot more out there than people think.”

Still, they mention how British Asian artists have many obstacles to overcome. South Asian artists don’t get the same support from the British art establishment. It’s the reverse, in fact.

The Singh Twins feel the establishment continues to have:

“This glass ceiling and very Euro-centric outlook and very much tends to put, what they see, non-European artists in this pigeonhole. And only tend to show them during ‘Indian Summer’ season or something like that.”

“So I think that’s partly…they’re there, but they’re just not visible as of yet because they’re not given that support.”

But surely the art world has seen improvement over the years?

The Beginnings of The Singh Twins and Their Advice 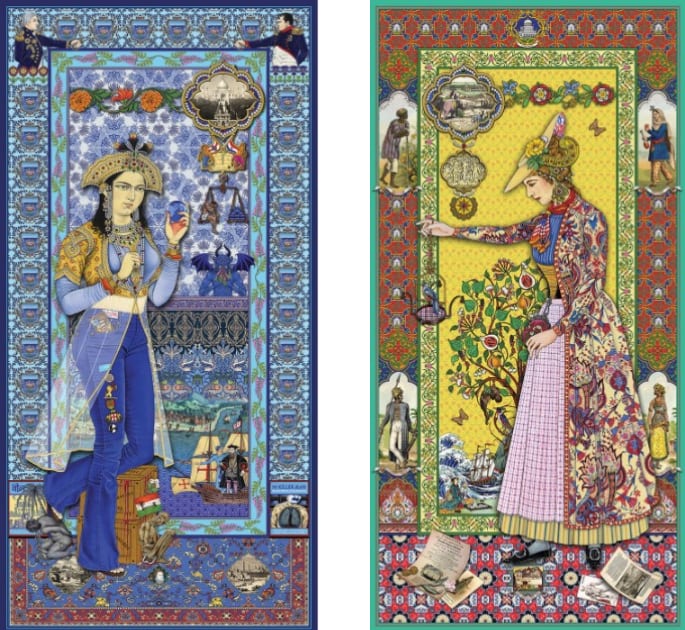 Well, The Singh Twins reveal how this Eurocentricity pushed them into their career. They recount the formative experience of their first degree – Ecclesiastical History and Comparative Religion at the University College of Chester.

Finding themselves studying Western contemporary art to fill in their timetable, they reveal how this pushed them on their path:

“We were trying to develop the Indian miniature style as our personal language. Because we’d always been fascinated with that tradition of Indian painting and that decision really didn’t go down well with the tutors at all.”

“They said that the art form was backward and outdated and had no place in contemporary arts.”

They relate this institutionalised prejudice to their experiences as young British Asians in the middle to later Eighties.

In such a Eurocentric society “it was at that point that we started work to challenge that kind of institutionalised prejudice and our work in itself became a political tool in order to enable us to rebel against those kinds of attitudes.”

But when advising other artists, especially women artists in this tricky environment, they advise:

“You have to have a good balance between pushing your interests within the arts but also having a level head and thinking: “okay what if that doesn’t pan out? What is my fall-back position?”

“You have to be mindful that you really have to proactive if you’re serious about being an artist. It’s not just sitting in a room somewhere and being isolated and creating.”

“It’s a much bigger job than that: it’s PR, marketing, proactively trying to find resources to enable you to create your work.”

Balancing creativity as well as a practical head appears to be the key for The Singh Twins, but they add:

‘The thing is really, never to give up, persevere, be serious about it. Don’t be frightened to promote who you are and what you do.”

“It doesn’t have to be in a sort of, pushing your chest out, kind of too much, but you can do it in a way that is self-assured and confident and really gets your message across.”

“But don’t just sit back and think that people are going to discover you. You really just have to get out there.”

Finally, they conclude that the business of being an artist is like any business. It’s obvious to see that The Singh Twins include this businesswomen hat among their many other roles.

Their range of talents and profound understanding of the Desi community’s past, present and future feeds into their work. Through the ‘Slaves of Fashion’ exhibition, they showcase a wonderfully rich body of work.

Full of elaborate detail, luscious colours and intriguing techniques, it was certainly worth the wait.

Thanks to their hard work to put Desi artists on the map, we’re hopeful for the future generations of artists. Above all, we can’t wait to see what they turn their hand to next.

Images courtesy of The Singh Twins