Tesla have revealed their latest luxury electric car. The all-wheel drive P85D, can hit 60 from standstill as fast as McLaren F1 and boasts high tech features.

The car can be summoned remotely, as well as park itself in the drivers garage.

Before the reveal on October 9, 2014, Tesla boss, Elon Musk sent out a cryptic tweet stating: “About time to unveil the D and something else.”

The innocently worded tweet managed to drum up speculation and some humorous responses.

Musk later responded to the replies, saying: “I love the Internet. Comments had me literally ROFL. No, it wasn’t intentional.”

He then took to the stage at Hawthorne Airport in Los Angeles to announce the new version of the Tesla Model S P85, the P85D. 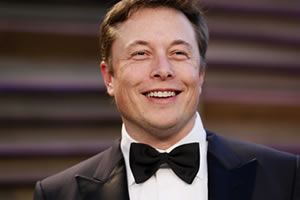 As some people correctly guessed, the ‘D’ stands for dual motor. The P85’s single motor is used to power its rear wheels.

The ‘D’ will have two motors, one for both the front and rear wheels, making it all-wheel drive.

Musk said the all-wheel drive of the P85D, differs from that of non-electric cars, which tend to be heavy and make the cars less efficient.

He also announced two other models; the 60D and 85D join the spritely electric car, and are tuned for distance. The pair will manage 225 miles at 65 mph, and 295 mph respectively.

The P85D is tuned for performance and gets 275 miles per charge. Tesla’s new model also improves on the formers safety, and adds ‘auto pilot’ features.

The car will correct its steering if it wanders from its lane, and brake automatically if it is about to hit something – features currently offered by Ford and other brands.

However, Tesla’s latest entry will also boasts cameras that will read speed-limit signs and adjust the car’s speed accordingly; as well as being able to move a lane when the driver uses the turn signal. 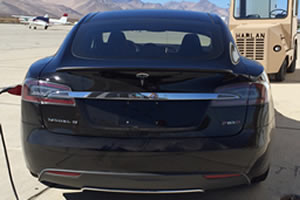 Most impressively however, Musk told the audience that on private property, the car could be summoned remotely, as well as park itself in the drivers garage.

The Tesla boss has developed a knack for industry revolutionising ideas. The mogul was a co-founder of PayPal in 1998, and also founded the first commercial, space transport company, SpaceX in 2002.

At the launch of the first Tesla Model S, Musk said: “The world has been under this illusion that an electric car can’t be as good as a gasoline car… the Model S is about breaking that illusion.

“It’s about showing that an electric car can really be the best car in the world.”

The impressive speed of the ‘D’ is comparable to that of sports cars. However, it still falls short of the Guinness World Record for the fastest 0-100 km/h accelerating electric car.

A custom build by the DUT Racing Team managed to hit 0-100 km/h (around 62 mph), in 2.134 seconds, a whole second quicker. However, a modified ‘White Zombie’ 1972 Datsun reportedly covered the same distance in an alleged 1.8 seconds – an impressive feat.

Zak is an English Language and Journalism graduate with a passion for writing. He is an avid gamer, football fan and music critic. His life motto is “Out of many, one people.”
PES 2015 ~ Pro Evolution Soccer
Nvidia releases GeForce GTX Graphics Cards